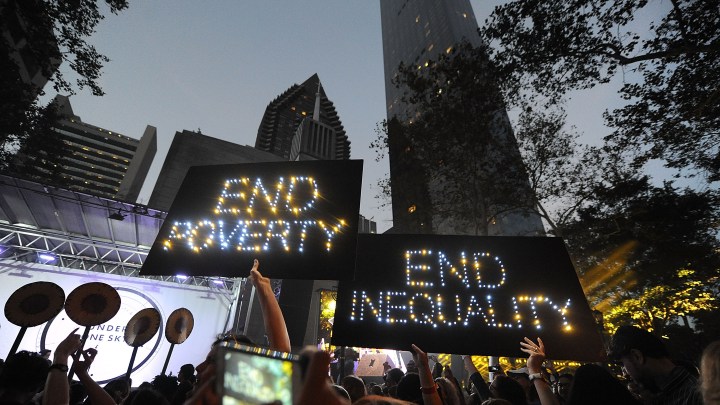 David Brancaccio, Rose Conlon, and Jarrett Dang May 3, 2022
Heard on:

David Brancaccio, Rose Conlon, and Jarrett Dang May 3, 2022
Heard on:

The pandemic worsened poverty in New York City, and according to a new report from poverty nonprofit Robin Hood, even as much of the city returns to business as usual, food insecurity, housing instability and deepened income inequality haven’t gone away.

Government support at the city, state and federal levels helped sustain many families through the peak of the pandemic, but many of these programs have either ended or will soon. The report found vast gaps in who benefits the most from the city’s economic recovery, with minority groups often benefiting less while facing more challenging conditions.

“Despite incredible progress leading into the last few years — and despite incredible impacts of some of the powerful government policies and financial transfers that really helped keep New Yorkers afloat during the pandemic — we see that New Yorkers continue to suffer,” said Robin Hood CEO Rich Buery in an interview with Marketplace’s David Brancaccio.

David Brancaccio: I remember earlier reports in this tracker showed just how the pandemic was certainly felt unequally: people at lower incomes, people at the front lines. Now that we’re transitioning to some other phase of the pandemic, I don’t want to say it’s over, what are you seeing? Inequality being, unfortunately, reinforced?

Rich Buery: Yeah, unfortunately we continue to see inequality being reinforced, even as we begin our recovery. New York City’s poverty rate for adults remains twice the national average. We know that for children and families living in poverty, they continue to suffer material hardship. Even today, unemployment rates remain high, particularly in the industries that are most likely to employ people of color and low-income New Yorkers. We know that 40% of all New Yorkers remained rent-burdened. So despite incredible progress leading into the last few years — and despite incredible impacts of some of the really powerful government policies and financial transfers that really helped keep New Yorkers afloat during the pandemic — we see that New Yorkers continue to suffer

Brancaccio: Yeah, because from our reporting we’re tracking high rents, we’re tracking how, if you’re going to buy a house, you have to pay all cash in some parts of the country, including around here. And that is going to disadvantage people.

Buery: Of course. New York City remains the second-most expensive city to live in in the United States, and so it’s not surprising that residents of New York City continue to experience extremely high rates of material hardship. And that’s part of what we see in the survey. Part of what’s so unfortunate is that one of the things that we also know from the last two years is that government programs work, government programs can be effective in fighting poverty. When you look at the pandemic and see the deep investments that happened at the federal, state and the city level — things like the child tax credit, expanded unemployment insurance, local policies to provide emergency rental assistance — we saw a massive impacts on poverty. We saw those policies were effective at moving 1.9 million New Yorkers out of poverty. We saw that those policies reduced the child poverty rate in New York City by half. But unfortunately those policies are temporary. So many of those supports that people were using to be able to pay the rent, to be able to make sure they can get their kids what they needed to thrive — so many of those supports are disappearing now, and so we are really facing a cliff.

Brancaccio: What are policy remedies that you think help some? You document, for instance, not just trouble finding a place to live and affording it, but also food insecurity. So is the remedy doing some of the work that you do, which is to support food pantries?

Buery: Yeah, food insecurity is a great example where one of the things that you would have expected to see over the course of the pandemic was increased food insecurity, but it turns out we didn’t. However, New Yorkers were much more likely to utilize food pantries and the emergency food infrastructure. So we know that those programs — whether it’s direct cash transfers, or whether it’s programs that supports things like food banks — can have a tremendous effect on keeping families and children safe and secure. And what we can’t afford to do is to have all those things disappear while the economy still hasn’t recovered. While, in New York City, we have an unemployment rate that is still twice the national average.

Brancaccio: It must be something when you have the radio on and you hear the voice come on and say, “unemployment is extraordinarily low.” That’s not what your data is showing.