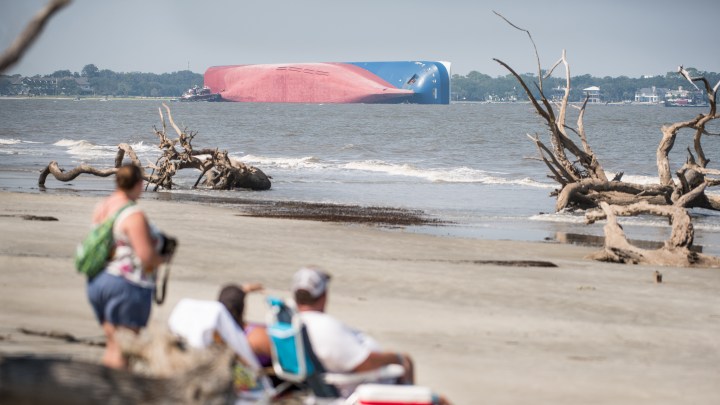 In 2019, a massive cargo ship capsized off Georgia’s coast. The Golden Ray shipwreck led to numerous oil spills and fires in one of the country’s largest coastal marshlands. The ship keeled over while leaving the port of Brunswick.

Georgia’s Glynn County has filed a federal lawsuit against a handful of shipping companies over the accident. The suit is seeking an unspecified amount for damages to public beaches, private property and wildlife.

Former commercial fisherman and YouTuber Andy Jones of Brunswick has gone out on his boat and used drones to document the ship being hauled away.

“There was a lot of material that came out of that ship, uncontained. Commercial fishermen locally were catching bits and pieces of cars in their net,” Jones said.

At the time of the accident, the Golden Ray was carrying more than 4,000 cars and 300,000 gallons of heavy bunker fuel. In April, Jones said he still saw debris.

“We had a car bumper wash back up on the beach,” he said.

The suit says the Golden Ray is the largest shipwreck in U.S. coastal waters since the Exxon Valdez oil spill in 1989. Crews pumped out most of the bunker fuel in December 2019, but according to the complaint, 44,000 gallons of petroleum products remained and started to spill out when the container ship was sliced apart.

County attorneys say they cannot comment on pending litigation. None of the defendants responded to requests for comment.

The lawsuit also talks about the environmental protection barrier — a floating wall that surrounded the wreck, with a mesh net underneath and a nearly milelong circumference.

“Yes, it directed some of the oil to a specific spot where the mitigation crew could clean it up, but there was also holes in it,” Inman said.

The barrier was put up by a unified command tasked with the cleanup, a group that included the U.S. Coast Guard and the Georgia Department of Natural Resources.

Doug Haymans directs the coastal resources division of the Georgia Department of Natural Resources. He said the barrier did the best job it could and captured most of the larger debris from the ship.

“You can’t possibly keep every single droplet of substance that comes out of it within a confinement, especially with the currents we have here,” Haymans said.

Inman and Haymans agreed that the currents in those waters are remarkably strong and spread some oil past the barrier to nearby beaches and marshes.

“One of the spills occurred near the end of the chicks hatching, and they weren’t able to fly yet,” she said. “So they’d go down to the edge of the waterway, get covered in oil, and they were not able to be recovered.”

Inman added that there were also impacts to the ecosystem that are harder to see and will require research over the next few years to fully understand.

“Manatees migrate through this area, and they’re slow and cumbersome, but they also eat the grass, but you don’t see what they’re ingesting until they’re sick or found dead,” she said.

The ship’s South Korean logistics company was fined $3 million by the state’s environmental protection division. But the coastal marshes and estuaries that were harmed are invaluable, Inman said.

“There is someone who has the definitive amount for all these injuries, but I have no idea what that looks like at this point.”