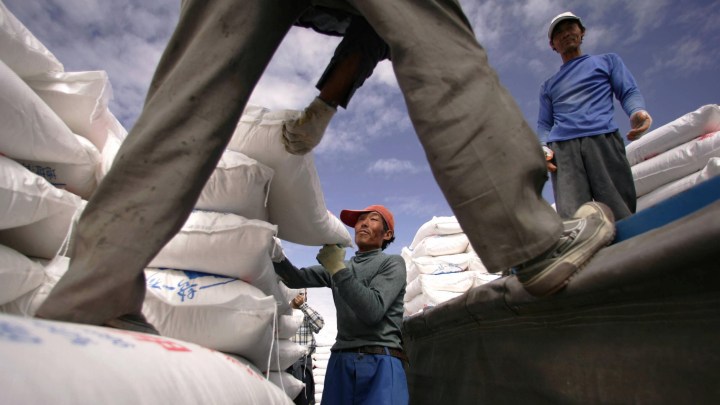 Problem is, China has a tendency of turning to trade policy to tackle issues at home, explain Chad Bown and Yilin Wang at the Peterson Institute for International Economics. They recently looked into how some of China’s policy changes led to negative side effects for the rest of the world.

“Marketplace Morning Report” host Sabri Ben-Achour spoke with Bown, a senior fellow at the Peterson Institute, about some of China’s recent trade actions and their consequences. The following is an edited transcript of their conversation.

Sabri Ben-Achour: So why don’t we start with an example that you’ve written about, fertilizer. China ordered its firms last year to stop selling fertilizer to the rest of the world. Why did it do that?

Ben-Achour: OK, so China doesn’t like the high price of fertilizer, it kind of keeps its fertilizer in its own borders. What does that mean for the rest of the world?

Bown: China is a huge, huge producer of fertilizer. And so when China doesn’t export as much, the rest of the world feels it. As soon as China imposed these export restrictions, the global price of fertilizer just started skyrocketing. And this is last summer, this is before, you know, the recent war in Ukraine or lots of other actions that governments have taken. China was really the leader here. When it took its supplies off of world markets, that really helped fertilizer prices escalate worldwide.

Ben-Achour: So where else is it doing this besides fertilizer?

Bown: Steel is another example. Historically, China has been a huge supplier of steel. It’s about, you know, 50% of world production of steel in any given year comes out of China. And the rest of the world has been concerned for a very long time that China was producing too much steel. But all of a sudden, last year as well, China decided to cut back on its steel production. Some of this was maybe to help address climate goals. But when that happens, of course, the price starts to go up. And to deal with that, China started restricting its exports of steel. And so that’s helped to deal with the steel price problem at home. But again, in the rest of the world, those steel prices have gone up above and beyond what’s happening in China.

Ben-Achour: Is this not something that many countries do, though?

Bown: It’s not typical for other major economies to do this. You know, the United States, for example, doesn’t typically use export restrictions. In fact, export taxes are actually unconstitutional in the United States. And so what China is doing here is really something very different for an economy of its size.

Ben-Achour: Is this something that the WTO [World Trade Organization] could deal with, address, be a place to settle this?

Bown: The WTO would be the natural place to kind of figure this out. China, more than any country, has taken on some legal commitments not to use export restrictions, more so probably than any other country. And that’s largely because China has a history of using these things. Other countries that haven’t used them, you know, haven’t necessarily promised that they wouldn’t do so in the future, because it really hasn’t been an issue for them. But really the problem right now is we don’t have a functioning WTO, for all intents and purposes. There’s no real dispute settlement process that’s working and the major economies aren’t really talking to each other anymore about a lot of these sorts of trade issues. And the worry is in an environment like today’s, where we do have these escalating food prices and fertilizer prices in particular, that can really come back and haunt us.

Ben-Achour: So if China is the only major economy doing this to a major extent, and if there is not a forum to address this, and if there’s not a price that China’s paying for doing this, I mean, what do you do about it?

Bown: Well, the real worry is that things devolve and you see lots of other countries just following suit. And we already have seen a little bit of that, just in the fertilizer market. Russia, last fall, saw China cut its exports of fertilizer and it decided to do the same thing as well. Russia’s also a major fertilizer producer and exporter. And so the concern is everybody just starts taking matters into their own hands, worrying only about, you know, their problems at home and forgetting about the implications in the rest of the world. And things just get worse. And for some countries out there in the world, they don’t have the option of trying to find fertilizer somewhere else. There are some countries that must import this if they want to grow food. And the real worry is that those countries, you know, some of the poorer countries, the food- and fertilizer-importing countries of the world, are really going to be the ones to pay because there is no way of, you know, the big countries getting together on these types of issues.

Ben-Achour: Is that the answer, then? I mean, for the major economies to actually figure out a way to arbitrate this problem?

Bown: The answer has to be the major economies of the world getting together and jointly agreeing to not do this sort of thing, you know. So it has to be the case that China, the United States, Europe, the major, major producers that have the capability of both having their actions harm other countries, but also restrain themselves from doing that harm. They have to get together and agree to stop doing these kinds of things. Otherwise, if they don’t, the rest of the world is just unfortunately going to suffer and be made worse off.