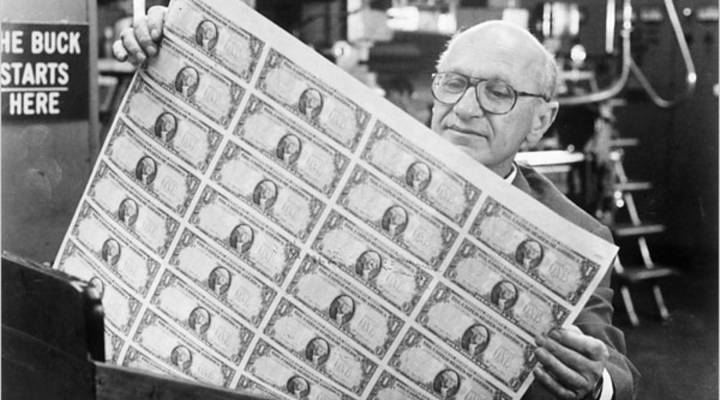 “Some called it slumpflation,” said Rick Wartzman of the Drucker Institute and author of “The End of Loyalty.” “’Inflump’ was another one that circulated. But most famously it was stagflation.’” This was a new idea that began to take root. Throughout the decade of the ’70s, the old postwar business model was crumbling under pressure from inflation and weak growth.

“Many companies had gotten fat and lazy during the ‘golden age of American business,’” Wartzman said. “We just didn’t see the seams starting to come apart until the late ’60s and early ’70s.”

Jensen may not have used those words, but to many that’s how his ideas were applied by an entire generation of business leaders.

“This social contract between employer and employee basically said, ‘If you come to work every day, and you work hard, and you give the corporation a measure of loyalty, we in turn will take care of you, often for the rest of your life, by extending health care and generous pensions to retirees.’” Wartzman said. “All that changed.”

To Wartzman and many others, a relevant case study is General Electric in the 1980s, run by an old college hockey captain named Jack Welch. Back in the 1950s, GE — like many companies at the time — made explicit the primacy of workers over shareholders.

Under Welch, the firm downsized more than 100,000 workers in five years, one strategy being to dump the lowest 10% of performers.

“If you’re the CEO of a company then, you have to keep that stock up,” said hedge fund manager Jeff Gramm, author of a book on boardroom battles called “Dear Chairman.” “There’s a famous quote from Carl Icahn from the 1980s: ‘You need to keep that stock up or someone will do it for you.’”

“You can just pick up the Supreme Court case ‘Hobby Lobby’ decided just a few years ago,” she said. “Read the majority opinion, where Justice Alito says, and I quote, ‘modern corporate law does not require for-profit corporations to pursue profit at the expense of everything else.’”

“I wouldn’t put shareholders at the center,” he said. “I’m still unhappy about the situation where people end up thinking that shareholders are primary, that they are our only bosses. No.”

Still, maximizing shareholder value remains in fashion. In one study of S&P 500 companies, the share of profits going to stockholders has increased from 50% in the early ’80s to 86% in 2013. That leaves a shrinking pool of money to invest in businesses themselves.