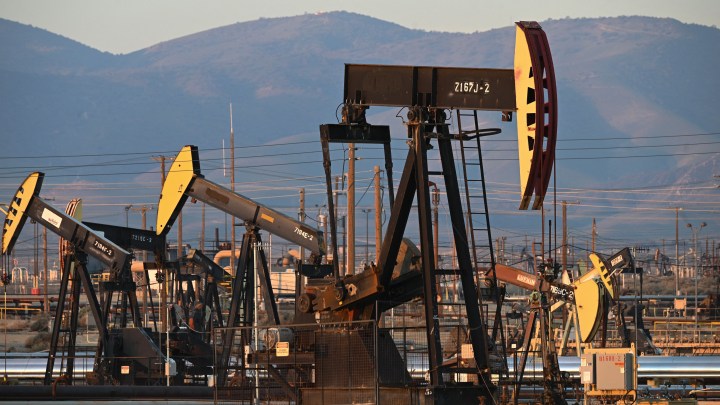 COPY
It may take six months to a year before any oil is produced from new leases on federal lands. Above, pump jacks in California. Robyn Beck/AFP via Getty Images

It may take six months to a year before any oil is produced from new leases on federal lands. Above, pump jacks in California. Robyn Beck/AFP via Getty Images
Listen Now

In the latest attempt to get a hold on rising oil and natural gas prices, the Biden administration announced over the weekend it would open up some federal land for drilling leases.

Symbolically, this move is polarizing. On one hand, it’s the administration showing voters that it’s willing to do something to help bring down prices. On the other, environmentalists are upset that the president is apparently going back on his word to try to curb oil and gas production in the United States.

Clark Williams-Derry, an energy analyst with the Institute for Energy Economics and Financial Analysis, said he gets why the administration made this move.

“There’s probably a real political need to be seen as doing something about high oil prices, high gasoline prices. But this is not going to have much of an effect,” Williams-Derry said.

That’s because it would take six months to a year before any oil could be produced there, he said. Plus, less than 10% of all of the oil and gas that’s being produced in the U.S. comes from federal land. Not only that, but energy companies aren’t even drilling on the federal land they’ve already got access to.

“They are getting a lot of pressure from their investors to rein in production, to not spend so much on drilling and essentially keep the cash flowing to investors,” Williams-Derry said.

The Interior Department says oil and gas companies are able to drill on more than 9,000 already approved drilling permits on federal lands.

Oil companies aren’t drilling there because there’s too much regulation, said Kathleen Sgamma, president of the Western Energy Alliance.

“This administration has chosen to use as many of those pieces of red tape as they possibly can to wrap us up, to slow down production on federal lands,” she said.

The amount of federal land up for lease announced by the Interior Department on Monday was 80% less than what was initially expected.

“You know, what they’re trying to do is as sort of a carefully balanced step here,” said John Leshy, general counsel of the Interior Department throughout the Clinton administration. “They’re not having a lockdown, a total lockdown of any new oil and gas leasing. But they’re also signaling that it’s a new day.”

A new day where not only is there a limited amount of space up for leasing, but the price to do it is going up, too. New leasing will now come with a royalty rate of 18.75% — up from the previous 12.5%.