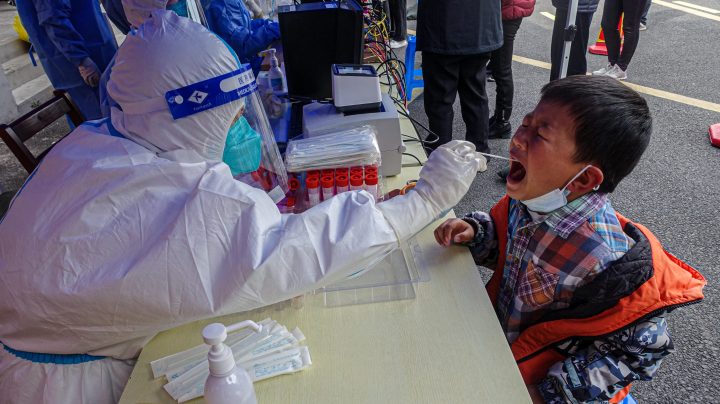 COPY
Shanghai has been mass testing its residents almost every day since the start of the month. Charles Zhang/Marketplace
COVID-19

Shanghai has been mass testing its residents almost every day since the start of the month. Charles Zhang/Marketplace
Listen Now

Throughout most of the COVID-19 pandemic, Shanghai was a place where I could order a fresh lobster online, have it cleaned and delivered to my doorstep within 30 minutes. Not anymore.

Last week, I rose just before 6 a.m. every day to order rice, cooking oil and eggs. I cycled through a dozen grocery apps without luck.

Since April 1, Shanghai’s 25 million residents have been effectively under a citywide lockdown. Officials denied for weeks that they would impose such a drastic measure in the financial hub. Police even detained two people for spreading rumors about a citywide lockdown.

However, the city is fighting its worst coronavirus outbreak since the start of the pandemic. Infections have shot up fourfold over the past two weeks to 23,000 cases on Monday in Shanghai, according to the government. That accounts for 95% of the cases in the whole of China.

On Monday, the U.S. State Department ordered some staff and their families to leave Shanghai because of the city’s indefinite lockdown and the restrictions in place to contain the surge. China has opposed the move.

“The U.S. should immediately stop attacking China’s anti-epidemic policies, stop politically manipulating the [pandemic] and stop smearing China,” China’s foreign ministry spokesperson, Zhao Lijian, said from Beijing, adding that the country had the capability of bringing the surge under control.

In contrast, one official on the ground in Shanghai has described the situation as “grim.” Since March, Shanghai’s leaders have pursued a so-called “dynamic clearance” strategy to contain the virus while keeping the financial hub open during this latest surge. The measure has been jarring and ultimately ineffective against the highly contagious omicron variant.

Ahead of the citywide lockdown, a taxi driver said he had picked up a passenger from a compound that had been sealed since mid-March. The passenger was only allowed to leave her compound in order to refill her medication.

“There was not even one COVID-19 case in her compound and it was still sealed,” the taxi driver said. Then he swore. “These pandemic rules are just ridiculous.”

By April 1, the whole of Shanghai was under the same restrictions: No one could step outside their front door except for mass testing.

On Day One of the citywide lockdown, I went to the end of my street for a mass testing; these were done in batches of 20. A member of the medical staff took a cotton swab and swirled it on the insides of my cheeks and placed it in a tube with other swabs. Some 16 million residents were tested on that day.

Day Two, I received a call to inform me that someone in my tube of 20 had COVID. They will retest us one by one.

If I catch COVID, Shanghai authorities will not only cart me off to an isolation facility but also my contacts and their contacts. Videos and pictures from some of these isolation facilities show they are not always sanitary.

On Day Three, I was called down to the parking lot to do my PCR test. A member of the medical staff yelled from a distance that we should keep at least 6 feet apart from other people being tested. Officials seem to be worried that people might be cross-infecting at these mass testings.

This time, the PCR was not a simple mouth swab. Instead, a medical staff stuck the cotton swab so far down my throat and another up my nose, that I screamed; PCR tests in China are rough. I tested negative, which is lucky.

Shanghai’s medical system is so overwhelmed that some people have been sent to other provinces. Over 96% of patients reportedly have mild symptoms or none at all. These people should be allowed to isolate at home, according to an official from the Shanghai Municipal Center for Disease Control and Prevention in a call with a COVID patient’s son.

“We’re being driven crazy as professionals. When we speak, no one listens. The virus has become politicized,” the Shanghai CDC official said in a call that was leaked and widely circulated among social media and WeChat groups.

What has riled people even more are videos of supposed COVID-positive children, several of them put in the same crib, seemingly unattended.

Marketplace has not been able to verify the videos, but last week at a press conference, the Shanghai Health Commission’s Wu Qianyu admitted there was a policy to isolate COVID-positive children from parents. She also defended this by citing the pandemic prevention rules.

“Those infected with COVID should be separated from those who are not,” Wu said.

After much public outcry, officials backed down slightly and said children who get infected with coronavirus will not be separated from their parents, except in a few cases.

There are no such guarantees for pets, who are feared by locals to be virus spreaders. In chat groups, friends circulated videos of a corgi being beaten to death by community workers after the pet owner reportedly tested positive for COVID.

“If anyone touches my dogs, I’ll grab my cleaver,” one friend said in a group chat.

Perhaps the biggest worry is food. Shanghai officials said they would ensure smooth logistics, but a number of delivery drivers were not allowed to leave their compounds.

Some friends spend a lot of energy organizing group buys, which seem to be the only channel food is coming through. I don’t read Chinese that fast and find the group buys confusing. They’re often also advertised in quantities that are beyond my needs, such as a 199 yuan ($31) offer for 29 pounds of Dole bananas.

There are government handouts to Shanghai residents, but they differ from district to district and do not account for family size. Over the past 12 days, I have received three packets including frozen shrimp, German sausages and some vegetables.

But over where Marketplace’s news assistant Charles Zhang lives, no meat has been delivered. Zhang waited nearly two weeks before receiving a vegetable box consisting of a turnip, one cabbage, a few Chinese vegetables and two potatoes. This hardly alleviates the pressure to feed the eight mouths in his extended family.

Friends have forwarded countless protest videos of people demanding food and insisting they be allowed to go back to work. Censors delete these videos as fast as they can.

Instead, we can read the Shanghai CDC’s tutorial on how to grow your own bean sprouts.

At least one guy has succeeded and showed off in a video on Douyin, China’s TikTok. Over a picture of bean sprouts, he overlaid some happy music. The caption read: “It took me half a month to successfully grow sprouts from mung beans. I finally have vegetables to eat.”

Sadly, I have trouble buying mung beans, too.