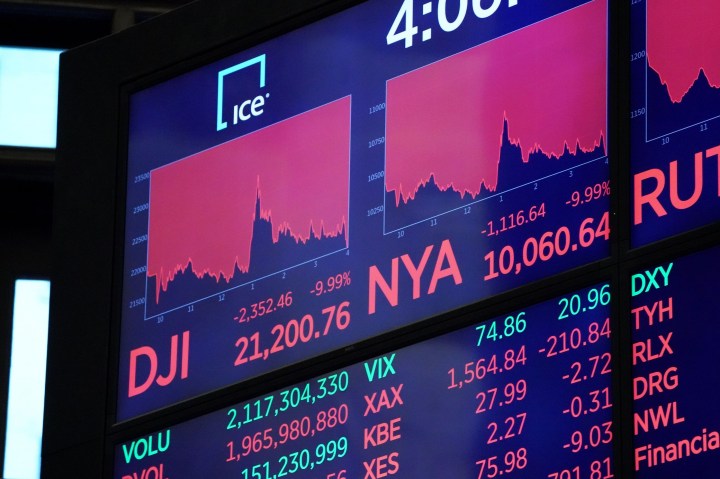 A view of the Dow's closing numbers back in March 2020, when fears over the spread of COVID-19 intensified. BRYAN R. SMITH/AFP via Getty Images
I've Always Wondered ...

A view of the Dow's closing numbers back in March 2020, when fears over the spread of COVID-19 intensified. BRYAN R. SMITH/AFP via Getty Images

We know the stock market is not the economy, however, in market reporting, why is the Dow Jones Industrial reported as more important (generally always first) when the S&P 500 is indicative of a broader cut of the market? Shouldn’t people be more interested in S&P’s numbers than the Dow in terms of what’s happening in the broad market?

When it comes to financial market news, the Dow Jones Industrial Average takes all the glory.

Fluctuations in the index command headlines, describing either its fall from grace or its latest record-setting gains. The index serves as a measure of blue-chip companies, industry leaders that are financially sound. Cove is right when he points out that it’s often mentioned first in market reports.

For all its preeminence, the Dow only represents 30 companies and it has its flaws. The Dow can be volatile, Tom Essaye, president of Sevens Report Research, told Marketplace, becoming skewed by more than one stock because of how small the blue-chip club is.

“The S&P 500 is probably a better measure of the broad trends of the stock market,” said William Goetzmann, a professor of finance and management studies at Yale University.

Experts think the Dow is regarded as the leading indicator because of tradition, which has cemented its place in our collective financial imagination as a barometer for the overall market since it emerged 126 years ago.

America’s second-oldest market index, the Dow initially comprised 12 companies. It’s named after Charles Dow and Edward Jones, founders of The Wall Street Journal. The WSJ says that it began to regularly publish the Dow starting in 1896. An earlier version of the index averaging the closing prices of 11 stocks, mostly railroads, was first published in 1884 (albeit irregularly).

Charles Dow, who was The WSJ’s first editor, created the index to explain movements in the stock market, according to his newspaper.

“As the U.S. stock market grew in importance, people wanted to have some timely indicator of the trends in stock prices,” Goetzmann explained. “It had a purpose. And it appeared at a time when there weren’t that many stocks.”

The Dow grew and, by 1928, eventually capped off 30 stocks, the number it stands at today. As the Dow gradually expanded, the stock market has grown even bigger. Way bigger. It’s a 30-company index with a $45 billion market cap, while the total value of the U.S. stock market is more than $53 trillion.

The Wall Street Journal continues to report the Dow to this day, as does The Washington Post, CNBC, and countless others (including, of course, yours truly). We turned to Marketplace host David Brancaccio, no stranger to reporting on the Dow, for his perspective on its sway.

“It is always a challenge to know which indicators to report,” Brancaccio said. “When people ask ‘What did the market do today?’ I find they usually are referring to the Dow Jones Industrial Average and will accept no substitutes.”

Cove also asked Marketplace whether there’s an index out there even better than the S&P 500, which, for example, doesn’t include smaller or mid-sized companies that may end up performing well.

According to Scott Brown, a technical market strategist at LPL Financial, you could make a case for reporting the lesser-known Russell 3000, which tracks the largest 3,000 publicly traded companies in the U.S. (about 98% of the U.S. investable market cap).

Both Brown and Goetzmann say what’s really important is the manner in which the Dow and other indexes are reported. It should be reported by noting the percentage change in the index, they say, not the shift in overall points.

“Because unless you follow something every day, you don’t know what the normal level is,” Goetzmann said.

There are different ways we should report the numbers, and different indexes we could report. In many ways, it’s surprising we still diligently report on the ones we do. As Brancaccio pointed out, we live in an era where people can check their portfolio on their phones anytime they want, something that matters more to investors than any index.

But the Dow seems to have a special hold on the public.

“I have a theory the Dow isn’t followed much as an investment index; it is interpreted as some kind of generalized barometer, a read-out on national zeitgeist,” he said.