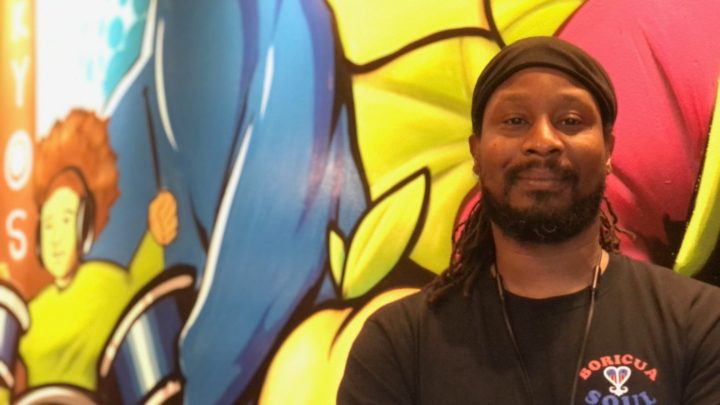 COPY
Toriano Fredericks, owner of Boricua Soul in Durham, North Carolina. It was difficult, but his restaurant was able to survive the pandemic and remain open. Leoneda Inge/WUNC

Toriano Fredericks, owner of Boricua Soul in Durham, North Carolina. It was difficult, but his restaurant was able to survive the pandemic and remain open. Leoneda Inge/WUNC
Listen Now

The kitchen at Boricua Soul restaurant in Durham, North Carolina, was preparing for its lunch crowd. A gigantic pot of yellow rice and pigeon peas was on the stove. Collard greens warmed nearby. The spot is known for its blend of Puerto Rican and Southern soul food.

Owner Toriano Fredericks said he’s proud of the way this establishment was able to survive the pandemic and remain open. It didn’t look good in the beginning, since Boricua Soul had opened only a few months before everything shut down.

“When we first came back, it was just me myself here doing curbside until I couldn’t do that anymore,” he said.

Then his wife, Serena, and son, Devin, came in to help.

Fredericks said he got a Paycheck Protection Program loan of $19,000. Plus, with community donations and a landlord who didn’t charge rent for a while, the restaurant is still here. But Fredericks said he needs more solid funding to grow and prosper.

“The biggest thing for us is putting these systems in place where we can succeed and finding the right people and plugging them in. The customers are here for us now,” he said.

Fredericks said he’ll need a business loan to expand. And from his establishment in downtown Durham, he can practically walk to Mechanics and Farmers Bank, or M&F, as it’s known.

James Sills, CEO of M&F, called the money a game changer for his institution.

“By having this capital — because that’s really the fuel for growth — it’s actually going to position our bank to become a much larger bank over time. So that’s really exciting,” Sills said.

M&F is one of the oldest Black-owned banks in the country. Sills said his bank has big plans for the money it received, which more than doubles its current capital on hand.

It’s the kind of money that can make a big difference for Black entrepreneurs.

“It is transformative in the sense of the fact that these institutions, these minority-serving institutions, have not seen this kind of capital, ever,” said Henry McKoy, who leads the entrepreneurship program at North Carolina Central University’s School of Business.

This big pot of funding looks good on paper, he said, but are the banks ready to take risks on their communities?

“Banks, for the most part, are not set up to take risks. So there are a whole lot of intricacies that make this a challenge to deploy that money in the Black community,” he said.

A lot can be done with a transformative grant like this one, McKoy said. Banks can help create affordable housing or business development ventures. But with the long history of the economic system being stacked against communities of color, he said, this money can only go so far.