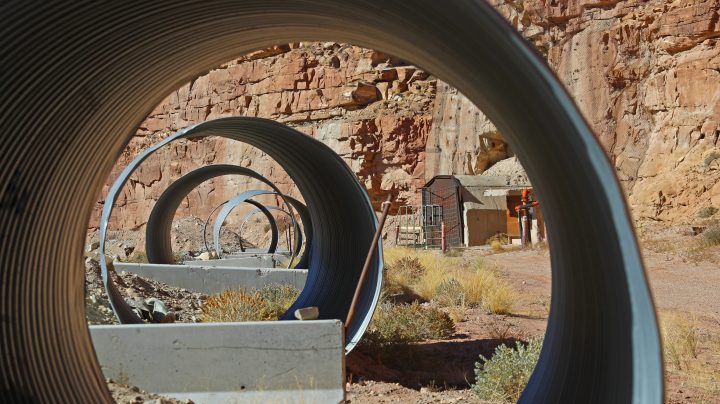 COPY
Some U.S. uranium mines have been closed for over 40 years. If Russian imports are banned, as some lawmakers advocate, they may be reopened. George Frey/Getty Images

Some U.S. uranium mines have been closed for over 40 years. If Russian imports are banned, as some lawmakers advocate, they may be reopened. George Frey/Getty Images
Listen Now

Some U.S. lawmakers, unhappy with American nuclear power plants’ reliance on imported Russian uranium, are pushing for a ban on those purchases. About 16% of the uranium that fuels the electricity-generating facilities comes from Russia, and an additional 30% is imported from Russia’s partner nations Kazakhstan and Uzbekistan.

If the ban comes to pass, the U.S. uranium industry would have an opportunity to ramp up domestic mining. But many Indigenous communities are still reeling from the impact of the last U.S. uranium boom. On Navajo lands, for instance, there are more than 500 abandoned mines, according to the Environmental Protection Agency.

If we stopped importing Russian uranium, we’d need to get creative to replace it, said Denia Djokić, who studies nuclear energy at the University of Michigan.

“There would be an initial need to pivot towards other sources, such as Canada and Australia,” Djokić said. Beyond that, she said, some mining companies in the U.S. stand ready to fill the gap.

“It will be very, very expensive,” she said, to ramp up production at mines that have been sitting dormant.

The industry asked the federal government to start buying domestic uranium for a national reserve at a recent Senate hearing.

“The U.S. has ample uranium resources and the capacity to produce them at the highest environmental safety and health standards,” said the president of the Uranium Producers of America, Scott Melbye.

But some argue those standards aren’t enough, like Amber Reimondo, energy director with the Grand Canyon Trust.

“It’s Indigenous communities in the Southwest that disproportionately would pay that price,” Reimondo said.

Like the Havasupai Tribe, whose reservation is at the bottom of the Grand Canyon. Havasupai leaders have asked the Joe Biden administration not to purchase uranium from the nearby Pinyon Plain Mine.

“And those uranium mines are from the ’40s through the ’60s. So that gives you a sense of the long-term impacts,” said Andrew Curley, a professor at the University of Arizona and a citizen of the Navajo Nation.

Curley said many of the deposits sit on or near tribal lands and called the push to onshore production a public health risk. He’s concerned about it “replicating some of the past problems that we’ve been trying to address for the last half-century.”

Last year, Congress set aside $75 million to fund a national stockpile of domestic uranium. But so far, none of that money has been spent.