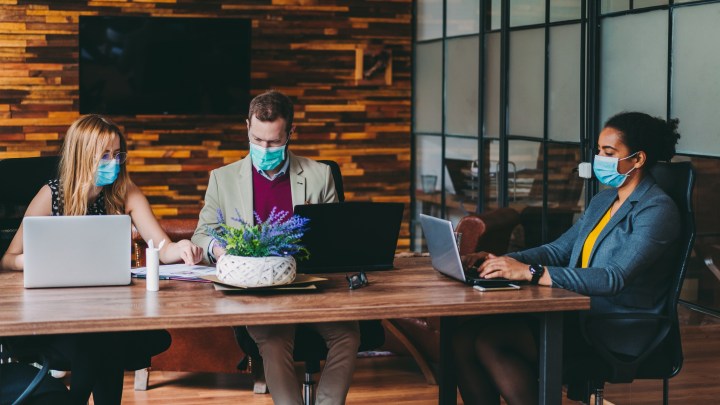 In his State of the Union address last month, President Joe Biden called for Americans to return to the office.

“I can say we are moving forward safely, back to more normal routines,” Biden said. “It’s time for Americans to get back to work and fill our great downtowns again.”

While government health officials like Dr. Anthony Fauci said they don’t expect a new surge of the BA.2 variant,  a group consisting of medical experts has since issued a critique in The Guardian against the notion that “the pandemic is over.”

Heads of countries and major companies have been eager for employees to work in-person again. A recent Microsoft survey of 31,000 people in 31 countries found that 50% of managers say their company requires or will require full-time in-person work.

Workers who previously had the ability to work from home are seeing increased wardrobe, food and transportation costs — price tags that are compounded by rising inflation. These expenses have forced them to cut back on spending, or added onto existing worries about how they’ll be able to save money.

Liliana Correa, a 40-year-old Chicago resident who works in the banking sector, said she’s spent between $500 to $600 updating her wardrobe now that she has to go back into the office twice a week.

The days of getting to wear sweatpants and a T-shirt are over, Correa said. Working from home allowed her to  just roll out of bed and start working.

“Whereas now, I have to give myself a good 70-75 minutes before I even walk out of the house just to shower, change, you know, take my dogs out — all of that,” she said. “It’s just adding more time on the days I have to be in the office.”

Correa said she’s spent about $15 for salads at a local restaurant. Add another $6 to $15 if she’s getting breakfast. She noted that she used to be able to buy salads for about $10, and coffee has gone up from $3 to $5.

These prices mean she’s become more cautious about spending, and will now bring her own lunch.

Sam C., a 32-year-old Boston resident who works in the nonprofit sector, has started a new job this week, and is also updating his wardrobe.

“The pandemic happened and I slowly got used to working from home in sweats,”he said.

He anticipates spending at least a couple of hundred dollars on new clothes — not counting dry cleaning.

Some workers who drive to work are also feeling the strain of rising gas prices. The national average for the price of gas stands at $4.17, compared to $2.87 a year ago, according to AAA.

Luis Velez, a 25-year-old project manager from Florida, said he had worked remotely until last October, when he was expected to return to the office five days a week.

Now, he has to spend money on gas to get to work, which is more than a dozen miles away. He might spend between $70 to $80 a week for a full tank of gas and about $11 each day for toll-road access if he wants to get to work on time.

“It’s definitely been somewhat of a hit to my finances, coming back to the office,” Velez said.

Some employees say that despite the extra costs, there are advantages to returning back to the office.

Sam C. said he’s excited to return to the office because there’s a separation between work and home, but employers in general need to take more into account their employees’ needs. By, for example, offering them stipends for basic work needs and items, he said.

“What about the first-generation office worker, who may not have the funds to buy office clothes right off the bat?” Sam said. “It’s time for employers to invest more in their employees.”

“But I think over time, if people went fully remote, we’d figure it out,” Correa said. “I’ve been more productive working from home than I have been in the office, ever, in my entire career.”  A recent Pew Research Center survey found that 60% of workers with jobs that can be done from home would prefer working from home all, or most, of the time when the COVID-19 outbreak has ended.