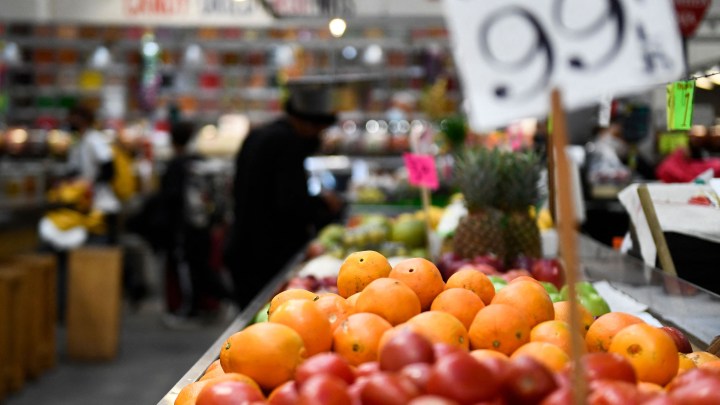 COPY
The economic theory behind this is that companies in markets with more players aren't able to pass higher costs on to consumers as easily. Patrick T. Fallon/AFP via Getty Images
Economic Pulse

The economic theory behind this is that companies in markets with more players aren't able to pass higher costs on to consumers as easily. Patrick T. Fallon/AFP via Getty Images
Listen Now

How much of this inflation can be tied to companies who have the power to impose these prices upon us? This question brings us to the “Marketplace Morning Report’s” Economic Pulse, which will be a regular checkup from a range of perspectives.

We checked in with Trevon Logan, a professor of economics at Ohio State University, for more. Below is an edited transcript of our conversation.

David Brancaccio: So one antidote to crazy inflation, these days, is to raise interest rates. The Fed’s working on that. But I think you’ve been reflecting on another tool: promoting more competition in industry. How does that work?

Trevon Logan: Yes, I think one of the most interesting aspects that we’ve seen about inflation today and in the recent months, is that inflation is occurring in places where wage growth is not particularly strong. So if we think about inflation in, for example, food at home, it’s actually rising faster there than food away from home. So one of the reasons we think that might be related to competition is that we know that that market is not particularly competitive today, as there has been a larger amount of market concentration, which can help firms to raise prices faster because they face fewer competitors in the market.

Brancaccio: The only thing about this competition tool to fight inflation is that it takes a while for it to kick in, at least with the Fed. If all that works with interest rates, inflation maybe could come down as the year goes on. But the competition stuff is something that, you know, we’d be talking several years before that might impact prices.

Logan: Yes, and so certainly to bring more competitors into market is not something that’s going to happen overnight. But I think one of the things that economists are a bit concerned about, in terms of this market concentration, is the fact that monetary policy itself might not be as effective in bringing inflation to tame it, or that you would have to have even larger increases in the Fed funds rate, for example, to bring about that correction to price increases, because it’s still filtering through a less competitive market process.