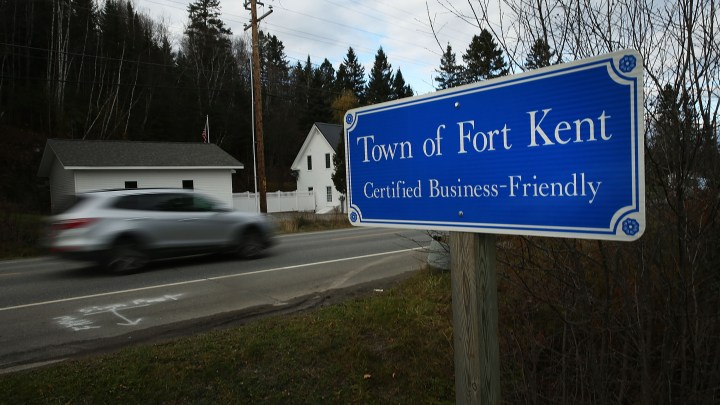 COPY
Legislators have proposed allowing law students to work at a legal aid clinic in Fort Kent to alleviate the shortage of lawyers in the area. Spencer Platt/Getty Images

Legislators have proposed allowing law students to work at a legal aid clinic in Fort Kent to alleviate the shortage of lawyers in the area. Spencer Platt/Getty Images
Listen Now

Lawyer Toby Jandreau didn’t quite realize the extent of the need for legal help in Fort Kent, Maine, until he moved back to the area about 12 years ago.

“I had the Ryder truck in the driveway, we were unpacking it. And my dad pulls in the driveway, and he says, ‘I got a call this morning. Somebody’s wondering when you’re opening, where your office is going to be. Because they need help,’” Jandreau said. “I didn’t even have my bed unpacked yet. And they knew that I was coming. And they needed help.”

At the time, Jandreau said, there was just one general practice lawyer covering cases from divorces to protection orders in the small, isolated town near the Canadian border — about a five-hour drive north of Portland.

The situation isn’t much better today. The shortage of lawyers is especially difficult in rural Maine as many attorneys in the state approach retirement.

In Aroostook County, where Fort Kent is located, it can take two hours or more to travel from one courthouse to the next. Yet local court clerks say only about 20 attorneys are available to take indigent legal defense cases, and many aren’t from the area.

That means lawyers from other regions are routinely brought in. They either drive hours to the courthouse or communicate through phone or Zoom.

“A lot of us are just getting burnt out,” Jandreau said. “I mean, I stopped taking court appointments because it just became unmanageable.”

Now, the Maine Legislature is looking to step in. Maine Senate President Troy Jackson, who lives in nearby Allagash, said he’s heard about the legal challenges from his own constituents.

“We all understand that you have the right to legal counsel, but what good is it if you don’t have the ability to get that legal counsel?” Jackson said.

That’s what prompted him to introduce a bill that would bring practicing law students into the county to help fill that gap.

“Too many people leave our area to practice or try and get, to become a practicing attorney,” Jackson said. “And oftentimes, they don’t come back. And I just thought that there’s a way to actually do some of the training in Aroostook County. We might be able to actually draw some people.”

Under the three-year pilot program, students at the University of Maine School of Law would still spend the first half of their education on the school’s campus in Portland. But after their first few semesters, two or three students at a time would head to Fort Kent, where they would work under the supervision of a professor in a satellite office of the college’s student legal aid clinic.

They would receive academic credit for the work and stay at the dorms of another state college campus in town. Their clients would primarily be people with low incomes who can’t afford to hire an attorney of their own. The program would cost about $340,000 a year.

University of Maine School of Law Dean Leigh Saufley said she hopes that if students spend time in rural Maine and make connections with other lawyers, more may consider settling down there when they graduate.

“And also see what it’s like to be part of a community and be part of these beautiful places in the state of Maine,” she said. “They’re excited, they want to be there. But if they’re just reading about it, the same connection doesn’t get made.”

The proposal is still winding its way through Maine’s Legislature but did receive initial approval from the Maine House and Senate. Officials hope that eventually, clinics could be set up in other rural pockets of the state where lawyers are desperately needed.