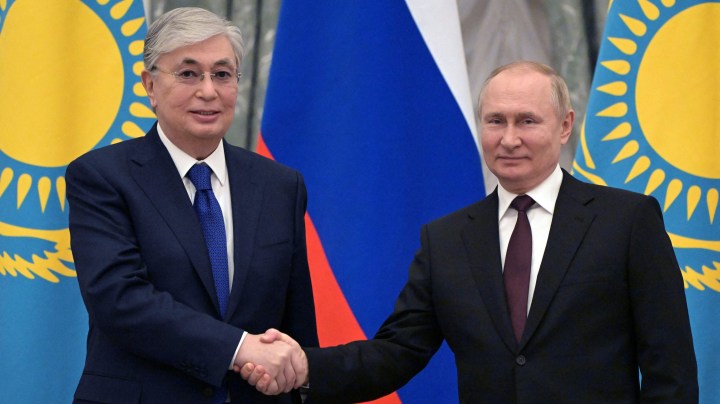 The five Central Asian republics — Kazakhstan, Turkmenistan, Uzbekistan, Tajikistan and Kyrgyzstan — are in a difficult neighborhood and a very tricky position. Three decades after they gained independence from the Soviet Union and became sovereign states, their economies are still deeply intertwined with what was the USSR’s dominant power, Russia. And they remain daunted by that country’s military might and nervous about President Vladimir Putin’s revanchist tendencies.

“They’re all fearful of Russia. They’ve all lived under Russian rule, and they know how aggressive and nasty, frankly, that it can be,” said Raffaello Pantucci, a senior research fellow at the RUSI defense and security think tank.

None of the five states is an open, liberal democracy. Indeed, one of them, Turkmenistan, is so repressive and isolationist that it’s been compared with North Korea.

But after 30 years of nation building, the Central Asian republics are determined to maintain their independence, and their nervousness about Russia’s intentions helps explain their studied ambivalence over Putin’s invasion of Ukraine. None of the five governments has publicly condemned it, and most have struck a neutral stance.

When it comes to the war’s economic repercussions, however, there can be little doubt about how unhappy they are.

“The effects of the conflict are having a severe impact on Central Asia’s people and their economies,” said Annette Bohr, an associate fellow with the Russia and Eurasia program at Chatham House, a policy institute.

For one thing, she said, the sharp fall in the value of the Russian ruble as a result of Western sanctions has hit Central Asia hard.

“Their economies are so tightly interlinked with Russia’s that any time the ruble falls, the national currencies of these states fall as well, and they’re very much impacted.”

Kazakhstan’s currency, the tenge, has fallen by 20%, pushing up the cost of imports, threatening much higher inflation and therefore much higher interest rates. This has happened in a country that was already struggling to recover from ferocious unrest that erupted at the beginning of the year and has possibly increased the scope for Russian interference.

A protest over a sharp rise in fuel prices escalated into running battles with police and the storming of government buildings. More than 200 people died in the clashes, and the Kazakh president, Kassym-Jomart Tokayev, invited Russian-led forces in to help restore order.

Those troops have since left the country, but Kazakhstan’s somewhat shaky regime is now beholden to the Kremlin, said Mario Bikarski, an analyst with the Economist Intelligence Unit.

“I think Russia will try to pressure Kazakhstan into being more supportive of Russia by allowing it to circumvent sanctions in some way,” he said.

The biggest economic threat now facing Central Asia, however, is the fate of its migrant workers. Some 7.8 million of them from across the region now work in Russia, and, as Annette Bohr pointed out, they provide a lifeline for their families back home.

“These remittances account for nearly one-third of Tajikistan’s entire gross domestic product and over a quarter of Kyrgyzstan’s,“ she said.

Remittances account for about 12% of Uzbekistan’s economic output. With Russia forecast to plunge into a deep recession, the future looks grim for Central Asia, according to Bikarksi.

“A lot of investment from Russia will be lost, as well as a lot of remittances on which some of these countries are quite reliant,” he said.

Kazakhstan and Turkmenistan are energy rich and should benefit from higher prices. But the region is landlocked, and both of these countries are hampered by logistical problems in getting their energy out to lucrative markets.

Kazakhstan exports over two-thirds of its crude oil through Russian ports. Turkmenistan, unable to liquefy its natural gas and ship it to Europe, supplies the vast bulk of it by pipeline to China at relatively cheap rates.

Central Asia is a victim of its geography, said RUSI’s Pantucci. “I think it’s a region that is still relatively young, has great potential and great opportunities, but is entirely bracketed by countries that are in some sort of conflict with the West at the moment.”