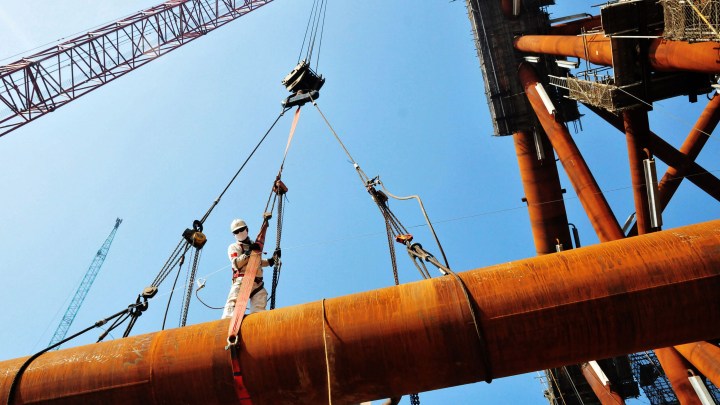 COPY
Though China relies on Russian oil, voluntary sanctions by Western companies could make it harder for China to get it. Above, a worker stands on pipes at an offshore oil in China's eastern Shandong province. STR/AFP via Getty Images

Though China relies on Russian oil, voluntary sanctions by Western companies could make it harder for China to get it. Above, a worker stands on pipes at an offshore oil in China's eastern Shandong province. STR/AFP via Getty Images
Listen Now

In normal times, one-third of his products would have been exported to Russia, but that’s not the case anymore.

“We don’t produce orders placed by Russian clients because we’re worried that the Russians won’t take the products once they are produced,” Zhang said.

The exodus of American and European firms in Russia should leave an opening for those countries still willing to trade with the Russians. Its biggest trade partner, China, has said it will continue trade with Russia as normal, but in practice, it is not easy with so many Russian banks sanctioned.

“If a Russian company and a Chinese company are doing business in U.S. dollars, and the payments flow through a U.S. bank, that is an issue that falls under primary sanctions. It is directly touching on U.S. jurisdiction,” said Bernard Chen Zhu, a partner for litigation at Morrison & Foerster in Hong Kong. He advises Chinese firms on U.S. economic sanctions.

Zhu said Russia holds a lot of Chinese currency, which allows for more trade with China outside of U.S. jurisdiction.

However, just because a transaction is settled in Chinese yuan, uses a Chinese bank and China’s Cross-Border Interbank Payment System, or CIPS, Chinese firms could still be subject to secondary sanctions.

“America can say, ‘Yes, these dealings are outside of my control, but since you are dealing with a target of my sanctions, I’m going to impose sanctions on you as well,’” Zhu said.

Chinese Foreign Minister Wang Yi has recently told his Spanish counterpart that China does not want to be hurt by Western sanctions.

Penalties for violating sanctions can be steep. U.S. prosecutors said Chinese tech giant Huawei did business in Iran in violation of American sanctions and charged the firm’s chief financial officer, Meng Wanzhou, with fraud. She was arrested in Canada in 2018 for extradition to the United States.

China then detained a couple of Canadians, which created a diplomatic standoff that took two years to resolve.

“A lot of Chinese companies would be really careful given what happened to Huawei,” Xu Qinduo, a senior researcher with the Beijing-based think tank Pangoal Institution, said.

He said Chinese businesses can still safely trade with Russia in agricultural products, such as wheat. There is even some leeway with Russian oil and gas.

“China needs a lot of oil and gas. Russia basically represents 16% of China’s oil imports, for example,” Xu said. “I expect that will continue. Even the European Union [is] also buying oil from Russia.”

However, getting oil into China could be a challenge.

“Many Western firms, including some big shipping companies, are voluntarily sanctioning Russia on their own, which is not required by their governments,” said international trade lawyer Yang Jie with the Huiye law firm in Shanghai.

China has said it is neutral on the conflict, but officials have condemned the use of the word “invasion” to describe Russia’s military action in Ukraine, its government-run media have parroted Russian propaganda and censors don’t allow much debate about the war online.

Some analysts say the war in Ukraine puts China in an awkward position. America and Europe are among its biggest trading partners. China is also the biggest trade partner for Russia and Ukraine.

“The trade relationship between China and Ukraine was very good,” Yang said.

However, China sympathizes with Russia’s grievances about NATO expansion, because, to a certain degree, the Chinese feel they’re under pressure too from the U.S. building alliances around it in Asia.

For example, Australia plans to build a new submarine base. “[The base] could host [nuclear-powered] submarines from the U.S. and U.K. We all know [they are] targeting China,” Xu said.

The U.S., Japan, India and Australia have teamed up to form the Quadrilateral Security Dialogue, more commonly known as the Quad.

“It is not exactly a military group, but obviously it is targeting China. We all know that,” Xu said.

Russia is an important strategic partner for China.

“However, that does not mean China supports Russia, specifically, on the Ukraine issue here. Everybody suffers, including China,” Xu said.

China could play a bigger role to stop the war in Ukraine. Yet there is a concern among some that even if the Chinese government works closely with the United States and ends the conflict, U.S.-China tensions remain.

“The U.S. probably will continue to have a problem with China over Hong Kong, over Xinjiang, over Taiwan, human rights [and] Tibet. The U.S. is not likely to change its stance on China,” Xu said. “So, then what is the point?”

Similar to the U.S.-China tensions, companies will continue to be caught in the middle.

“The situation Chinese companies are facing is this: There is more demand from Russia, and Chinese companies could fill that demand and expand their businesses,” Yang said. “But then, [Chinese firms] also risk being cut off from Western markets.”