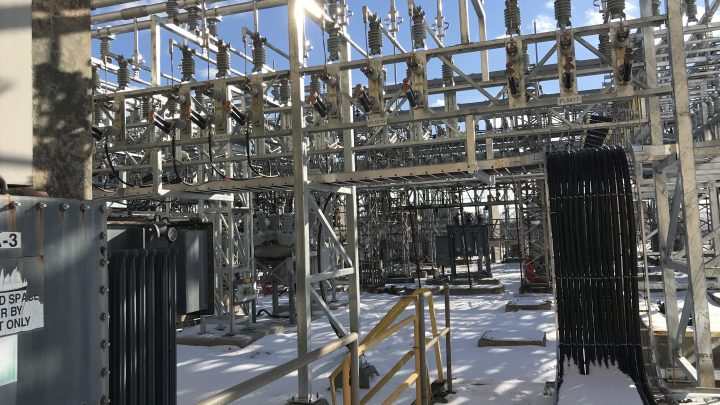 Coinmint is using an old aluminum smelting plant as a cryptocurrency mining facility. The plant comes with its own electrical substation with direct hookups to the grid. Lily Jamali/Marketplace
Listen Now

Upstate New York is in the middle of a new gold rush of sorts — a cryptocurrency rush, actually. And the people and businesses doing the rushing are cryptocurrency miners who do the lucrative computer work that keeps the cryptocurrency network running.

These miners have been flocking to the region for a couple of years now, because electricity there is cheap thanks to abundant hydropower. The influx has the potential to help out towns that have been struggling economically for decades.

But even though some of these places are eager to attract new business and the jobs they create, they’re treating the industry with caution.

Mining in an aluminum plant

On the outskirts of Massena, New York, just a few miles from the Canadian border, a former aluminum smelting plant is humming. A few years ago, a company called Coinmint turned it into what it calls “the largest digital currency data center in the world.”

And when you visit, director of operations Ben DeGraw greets you with a warning: “Do you have any sensitivity to noise?”

That’s because there are thousands of computers inside and they’re all really loud. But it’s not just loud — it’s dusty, and at 30 degrees, it’s freezing.

“What we’re entering right here is known as our Potline 1,“ DeGraw said, gesturing.

The term “potline” is a holdover from this plant’s past life as an aluminum smelter. Potlines are long buildings or spaces that held the “pots” where aluminum was made. Coinmint has been using three of the potlines. Each one holds 39 shipping containers, each holding 300 computers — all mining for cryptocurrencies.

That takes a lot of electricity. And Coinmint came here four years ago because, just like the aluminum business before it, it wanted to take advantage of the cheap hydroelectric power here.

The plant connects directly to the grid and has an electrical substation big enough to serve more than 200,000 average homes.

“We came in, cleaned the place up the best we could and utilized the existing infrastructure, basically, to our needs,” DeGraw said.

Coinmint said it employs about 100 people, with plans to bring on dozens more this year. That’s a fraction of the 450 jobs here when the plant was last used to smelt aluminum.

But plenty of local residents welcome the new jobs.

“It’s good money, and it’s the best money that you can earn around here,” said Kyle Jeffery, who works as a cook at a local hotel restaurant. Turning Massena into a cryptocurrency haven has been good for the town’s long-term prospects, he said.

“I think it’s a great opportunity. I think crypto is going to be around for a while, it’s gonna be a big part of our future. And I’m excited to see what happens.”

Massena could use the help. It has spent decades trying to figure out its next act. A lot of work has gone into making downtown cute. The streets are lined with pilates studios, flower shops and art galleries. But there are also a lot of vacant storefronts.

“It’s not real, but it kind of is because you believe it is, which is kind of how magic works,” Champion added. Still, she acknowledges that interest in Massena from cryptocurrency miners might not be such a bad thing.

“If it’s gonna happen, the least that can happen is that we get some economic benefit from it since the town is limping,” Champion said.

And Massena is certainly getting offers, according to Eric Gustafson, the town attorney and general counsel of the town-owned Massena Electric Department.

“What we have found is that every time the price of bitcoin goes up, the volume of calls goes up with it” from prospective cryptocurrency miners, Gustafson said. “That’s a pretty direct correlation.”

Two hours east of here, the city of Plattsburgh, New York, offers a cautionary tale. In 2018, a Coinmint mining facility there helped the town burn through its allocation of cheap power. Rates for electricity shot up. And Plattsburgh became the first city in the nation to temporarily ban cryptocurrency mining. Gustafson said people in Massena were watching.

Massena and Plattsburgh have company as they grapple with cryptocurrency mining — at least a half-dozen municipalities in New York state. Some crypto miners have even taken to firing up old fossil fuel-burning power plants to power their operations.

Taylor said that air and water pollution from the facility, which is owned by a private equity firm, threatens local tourism. Even cryptocurrency miners that aren’t using dirty power threaten the state’s goal of getting 70% of energy from renewables by 2030, she said.

State Assembly member Anna Kelles, who represents a district that includes part of the Finger Lakes, has sponsored legislation that would place a partial moratorium on repurposing power plants for cryptocurrency mining statewide. It would also require the state to do an environmental impact assessment on cryptocurrency mining. But Kelles said it’s not just an environmental issue.

“The thing that is frustrating to watch is that the cryptocurrency mining companies are going into municipalities that are economically depressed. So there is a deeper need — even a desperation — to bring in anyone, and there’s less ability economically to be discerning,” she said.

Kelles wants towns like Massena to have more time and more information so they — and the state — can set rules for an industry that doesn’t have many.

Correction (Mar. 14, 2022): Previous versions of this story misstated the name of Ben DeGraw, the director of operations at Coinmint’s Massena facility.