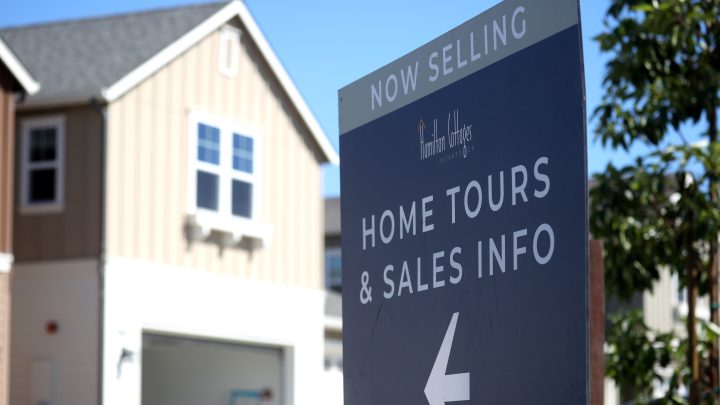 COPY
After easing last week, mortgage rates may not stay down for long with the Federal Reserve set to raise interest rates this month. Justin Sullivan/Getty Images

After easing last week, mortgage rates may not stay down for long with the Federal Reserve set to raise interest rates this month. Justin Sullivan/Getty Images
Listen Now

The flight to safety trend in the bond market is showing up in the housing market, with interest rates falling last week for the first time in about three months.

The Mortgage Bankers Association’s weekly survey showed the average interest on a 30-year fixed-rate mortgage dropped to 4.09% from 4.15% the week before. Uncertainty about where rates are headed comes as the spring homebuying season gets underway.

But the dip in mortgage rates may well be temporary. Danielle Hale, chief economist at Realtor.com, said Federal Reserve policymakers are still expected to raise interest rates at their March meeting in an effort to curb inflation.

“While they acknowledge there’s a lot of uncertainty in the economy stemming from the conflict in Europe, they still see the need to tighten. And so that means we’re likely to see mortgage rates begin to tick up again,” she said.

In the short term, that could actually spur home sales as buyers rush to lock in what are still very low rates before they rise further, Hale said.

But longer term, “affordability is going to be very top of mind for folks, especially in an inflationary environment like we’re in right now.”

There are signs that inflation is weighing on buyers’ minds. Tawanda Burney is a broker in Charlotte, North Carolina, who also has a loan-signing business.

“Within the last two weeks, with gas prices, I’ve been getting a lot of people concerned about that and, you know, stepping back to see where everything’s going,” she said.

Those prices are hurting her business in another way. “I’ve got a vehicle that takes premium gas, and I just don’t want to go out and show anything,” Burney said.

What hasn’t changed is the lack of homes for sale. Though listings typically pick up during the spring and summer months, Anne Powell at Coldwell Banker in Ocean View, Delaware, doesn’t expect it to put a damper on prices. Most of her clients are wealthy people buying second and even third homes, and she thinks they won’t be fazed by higher mortgage rates.

“The second-home buyers, either just, you know, ‘Life is short. Let’s go get the beach house. We can’t wait till tomorrow anymore because look what tomorrow brings.’ And now I think also people are saying, ‘Hey, it might be a good idea to diversify our holdings, and let’s put something in real estate.'”

Making it that much harder for people trying to buy their first house.