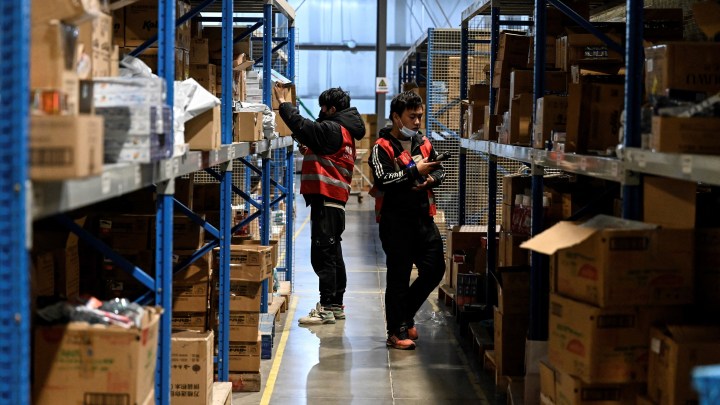 COPY
Workers sort packages at a JD.com warehouse in Beijing in November. Items have been flying off the virtual shelves of a Russian store on the Chinese e-commerce site. Jade Gao/AFP via Getty Images

Workers sort packages at a JD.com warehouse in Beijing in November. Items have been flying off the virtual shelves of a Russian store on the Chinese e-commerce site. Jade Gao/AFP via Getty Images
Listen Now

Chocolates, biscuits and face masks from Russia have been flying off the virtual shelves of an online vendor on China’s e-commerce giant JD.com.

The online shop, which said it is backed by the Russian embassy in China, thanked Chinese consumers in a video message last week.

“Dear Chinese friends, thank you for supporting Russia and the shop during this difficult time,” Sergei Batsev of the Russian Chamber of Commerce said in the video.

The “difficult time” he refers to means the sanctions Russia is facing for its war in Ukraine.

China has said it is neutral on the conflict but officials have condemned the use of the word “invasion” to describe Russia’s military action in Ukraine, actively censored pro-Ukrainian comments online and have opposed what they refer to as “illegal” and “unilateral” sanctions by the United States and its allies on Russia.

Chinese officials seem to have chosen Russia’s side, which might not be a problem for now, according to Xiong Peng, a global commodities trader based in Beijing.

“As long as China does not change its current stance and officials continue to say ambiguous comments that don’t amount to much, China won’t be directly sanctioned,” he said.

Last week, Chinese foreign ministry spokesperson Wang Wenbin pledged to continue to trade with Russia as usual. That carries weight, given that China was Russia’s biggest trade partner last year, with total imports and exports amounting to a record $147 billion. There were plans to increase China-Russia trade even more before the war in Ukraine and Western sanctions hit Russia.

The laws of supply and demand dictate that if fewer countries want to do business with Russia, supply goes up and China could negotiate cheaper prices for Russian imports. Russia is the second biggest supplier of oil and the third biggest natural gas supplier to China.

“Theoretically, there is a chance for China to ask for a lower price for [commodities], but in reality, the chance is slim,” Xiong said. “Because the price of commodities like natural gas is decided over a long period [with a complex calculation]. You can’t just use today’s price to decide the price for the next 20 years.”

Another factor is that the buyers of Russian oil and gas are mainly Chinese government firms, which, according to Xiong, do not always make deals based on profits.

As for China’s exports to Russia, Chinese traders are not having a great time either, as Russia’s currency, the ruble, has fallen to a record low against the U.S. dollar.

“The depreciation of the Russian ruble will impact Chinese and foreign companies because China-Russia trade is mainly settled in U.S. dollars,” the Chinese e-commerce news site ENnews said in a video. “Even if Chinese suppliers don’t increase the price, Russian buyers still need to pay more rubles to buy the same products, so Russian clients won’t place as many orders.”

Russian clients could switch to pay in Chinese yuan, though it is is not nearly as popular and might not lower costs, since the currency has also appreciated against the U.S. dollar to a four-year high.

Some Chinese suppliers also fear that with the European Union barring several Russian banks from the international SWIFT financial messaging system, Russian clients may not be able to pay at all.

If China wanted to help Russia remove the sting of Western sanctions, such as through buying more Russian oil and gas, it will not be easy.

“China can’t find enough oil tankers to ship Russian oil,” commodities trader Xiong said. “Many shipping companies are afraid of being sanctioned for shipping Russian oil. And as for natural gas, the pipeline from Russia is behind schedule. It has only just reached China’s northeast to Harbin city. … [Because] of these two restraints, even if China wants to buy oil and gas from Russia, there is no infrastructure to facilitate this.”

The war in Ukraine has consequences beyond that country and Russia, including logistics, which are already under pressure worldwide from the COVID-19 pandemic.

“For air transport, bypassing Russian airspace means it takes longer to ship products. The war has also pushed up the price of oil — the biggest cost for airlines — and transportation prices,” Menglar Technology, an e-commerce consultant based in Guangzhou, said on the firm’s channel on Douyin, China’s TikTok.

Cross-border shipping will take longer and costs more. It may be why the online Russian shop, while thankful for Chinese consumer support, also issued a plea: “I ask you for your patience and understanding. It will take longer for you to receive the orders than usual,” Batsev said.

He pleaded for Chinese consumers to avoid unnecessary orders.