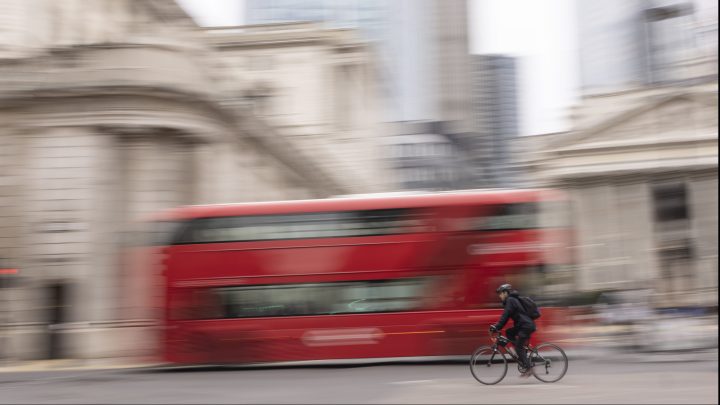 COPY
Economist Mauricio Olivares developed a rule of thumb to help him through London on a bicycle. He says that type of decision-making is useful for navigating uncertain scenarios. Dan Kitwood/Getty Images

Economist Mauricio Olivares developed a rule of thumb to help him through London on a bicycle. He says that type of decision-making is useful for navigating uncertain scenarios. Dan Kitwood/Getty Images
Listen Now

Investors have recently been flocking to “safe-haven” investments like U.S. treasury bonds, gold and other commodities. These assets tend to stay valuable in uncertain times.

At times of geopolitical upheaval, investors and other decision-makers often turn to “heuristics” — understandings like the one above — to help them navigate an unstable world.

“Simply put, heuristics are mental shortcuts, rules of thumb that people use to make decisions faster,” said Mauricio Olivares, a postdoctoral research fellow at the economics department of University College London. “This becomes particularly handy in situations when you don’t have enough time to consider all possible consequences of every action.”

As an example of heuristics in action, Olivares told a story about his first time biking to campus in London’s left-handed traffic.

“I was, first of all, very excited, but also a little bit scared,” he said. Biking through traffic requires fast-paced decision-making, which, new to the city, Olivares found difficult.

To help himself navigate, Olivares developed a heuristic, or rule of thumb. “Because I couldn’t be checking my phone constantly, I looked at other cyclists that were next to me,” he said.

The word “heuristic,” derived from Greek, has the same etymological roots as the word “eureka,” as in “I have found it.” Olivares’ “eureka” moment was realizing that other cycling students in the area were probably going to the same place he was: University College London.

“My heuristic was: [If] they look like students, I’m going to assume they’re students. And once you make that connection, it is very likely that they go to the same destination,” he said.

By copying the actions of other cyclists who looked like students instead of finding his own route, he saved time and mental energy. “And then, at some point, I realized that they were actually on campus, and I was like, ‘OK, this worked.’”

Someone who doesn’t have enough time, skill or information to calculate all the potential risks and returns of a particular investment might follow a strategy that’s been successful in the past — like buying gold during a geopolitical conflict.

“The idea of the heuristic is that what has worked in the past, you may assume that it’s going to work in the future,” Olivares said.

Making decisions based on past experiences instead of present realities can also be risky.

“These kinds of rules of thumb often also induce biases, said Olivares. “They work on average, but that doesn’t mean that they will work always.”

In the cycling example, Olivares’ past experience observing students on university campuses helped him develop a rule of thumb for way finding. “But if I were to repeat this strategy every day, perhaps I will find myself making more mistakes than not,” he said.