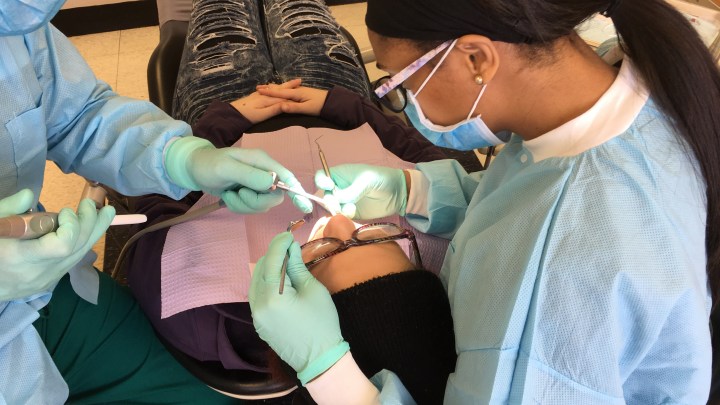 COPY
At a free dental clinic day put on by Meharry Medical College in Nashville, Dr. Ratrice Jackson drills out a cavity. Hundreds lined up to get treatment at this event in 2018 since Tennessee does not provide dental coverage to most adult Medicaid patients. Blake Farmer/WPLN News

At a free dental clinic day put on by Meharry Medical College in Nashville, Dr. Ratrice Jackson drills out a cavity. Hundreds lined up to get treatment at this event in 2018 since Tennessee does not provide dental coverage to most adult Medicaid patients. Blake Farmer/WPLN News
Listen Now

There’s growing recognition, even among states that provide limited Medicaid benefits, that poor oral health contributes to a broad range of chronic problems, from depression and diabetes to unemployment.

“If you don’t have a good smile, you oftentimes don’t have a job,” said Dr. Lisa Piercey, who leads the Tennessee Department of Health.

More states have added dental benefits to their Medicaid coverage for low-income residents in recent years. Idaho started coverage in 2018 and Delaware began in late 2020. But Tennessee and Alabama don’t provide dental coverage to adults — not even for painful emergencies.

Now Tennessee’s Republican governor, Bill Lee, who has resisted using federal money for Medicaid coverage under Obamacare, has proposed expanding dental benefits to all adults on Medicaid. The new coverage would extend to more than 600,000 people at roughly $75 million a year, according to Stephen Smith, director of Tennessee’s Medicaid program, known as TennCare.

State lawmakers still have to sign off on the plan, so leaders are pitching the dental coverage as a way to improve overall health and possibly save money from reducing other types of expensive treatment.

“We also know that we have a lot of visits to the emergency room,” Smith said.

The state spent $10 million in 2019 on patients showing up to the hospital because of tooth pain or another oral health crisis, Smith said. Many times, hospitals can only offer pain medication — occasionally, with opioids.

But adding so many new patients at once presents a workforce problem.

The dentist shortage touches virtually every state, according to tracking by the Kaiser Family Foundation. But it’s largely a rural issue, with roughly 60% of the shortage areas in rural communities.

Dentists take on so much debt in school — now, more than $300,000 on average — that it can be hard for them to justify setting up shop in a small town with fewer insured patients around. Many prefer to be in the suburbs where more people have private insurance.

To compensate, Tennessee plans to pump nearly $100 million into the state’s two dental schools over five years so they can expand class sizes and offer to pay off student loans for those who go to high-need areas.

Dentists helped craft the plan and are generally supportive. But Dr. Jeannie Beauchamp, the president of the American Academy of Pediatric Dentistry and a dentist in Clarksville, Tennessee, said the low rate of reimbursement from Medicaid patients still has to be resolved.

“You could not have a practice that you have more than 35%, 40% of your patients … Medicaid patients … you’d go broke,” she said.

So some new dentists may not stay long in those rural communities and find their way back to the suburbs if Medicaid payments don’t increase, she said. But there’s recognition that low reimbursement rates are part of the problem, so Tennessee leaders are also trying to raise what Medicaid pays dentists for doing the work.