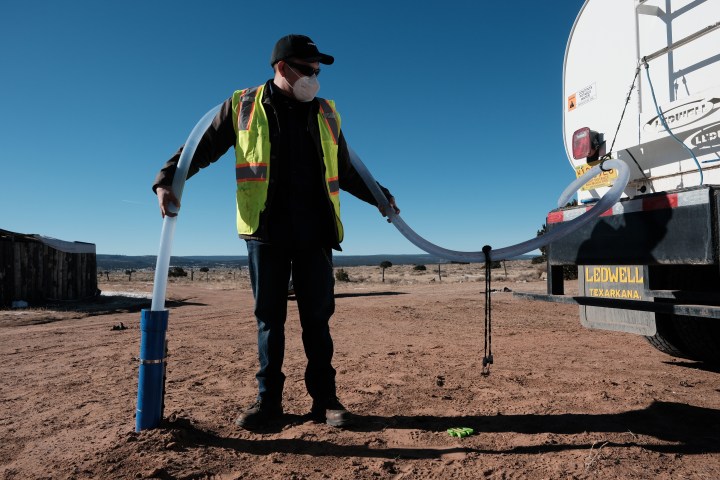 COPY
A water pump is repaired outside of a home on the Navajo Nation on Dec. 16, 2021 in Thoreau, New Mexico. Spencer Platt/Getty Images

A water pump is repaired outside of a home on the Navajo Nation on Dec. 16, 2021 in Thoreau, New Mexico. Spencer Platt/Getty Images
Listen Now

This week, the Department of the Interior announced it will put $1.7 billion toward fulfilling water rights settlements with 12 tribal nations in Arizona, New Mexico, Utah and Montana.

The funding comes from the infrastructure spending plan passed by Congress last year.

In 1908, the U.S. Supreme Court ruled that tribes have a right to as much water as they need to be self-sufficient. But it didn’t quite work out that way.

He said it took until 2004 to get his tribe’s water rights codified in federal law — nearly a century after that Supreme Court ruling.

And one term of the tribe’s 2004 settlement with the federal government wasn’t fulfilled until this week: funding to improve the tribe’s water infrastructure.

“The allocation that we’re getting is going to be $92 million, which will allow the community to shore up our water delivery system,” said Louis.

Gila River is one of dozens of Western tribes that’s been waiting on funding from a water rights settlement, said John Echohawk with the Native American Rights Fund.

The challenge, he said, has been getting Congress to appropriate the infrastructure funding it agreed to in these decades-old settlements.

“It’s a lot of work to try to get those appropriations, and the tribes get frustrated. And to have all that money put on the table now is just terrific news,” he said.

News that comes after a challenging two years for tribal nations — Indigenous people have been hit disproportionately hard by COVID-19 and the pandemic’s economic ripple effects.

And that’s in part because of underinvestment in tribal water delivery systems, said Traci Morris, director of the American Indian Policy Institute at Arizona State University.

“People couldn’t wash their hands. People don’t have flushing toilets. They’re using outhouses in some cases. Not all, but it’s out there. Look how compounded that becomes,” she said.

Morris adds that the funding set aside for tribes in the infrastructure spending plan — including to fulfill water rights settlements — could help narrow that infrastructure gap in the coming years.