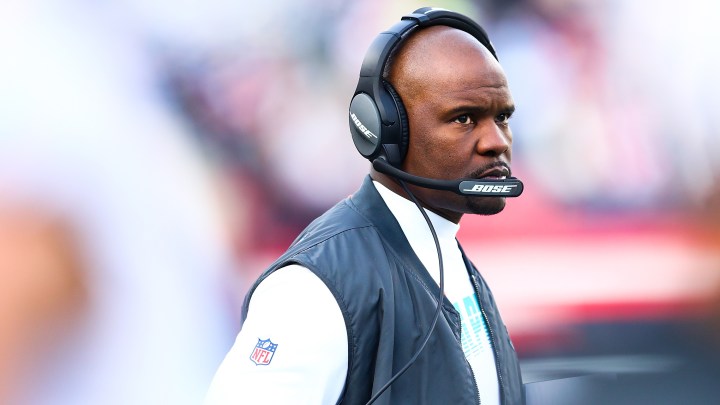 COPY
Former Miami Dolphins head coach Brian Flores claims in a lawsuit against the NFL that the Rooney Rule — which requires that one nonwhite candidate be interviewed for head coach positions — is all show. Adam Glanzman/Getty Images

Former Miami Dolphins head coach Brian Flores claims in a lawsuit against the NFL that the Rooney Rule — which requires that one nonwhite candidate be interviewed for head coach positions — is all show. Adam Glanzman/Getty Images
Listen Now

While 70% of NFL players are Black, only 16% of the league’s general managers and 6% of its head coaches are.

“What we’re seeing in the NFL is the equivalent of if we had 80% to 90% of the coaches in the National Hockey League being African American,” said Kenneth Shropshire, CEO of the Global Sport Institute at Arizona State University and author of the book “In Black and White: Race and Sports in America.”

People have known for a long time that minorities have a steep hill to climb to get ahead in NFL management, argues Jason Belzer, attorney, coaches’ agent and founder of Game Inc.

“We have always known that until somebody stepped up with a smoking gun and said, ‘Hey, I have actual proof that the system is rigged against me,’ nothing was gonna change,” he said.

Flores got a text from his former boss, New England Patriots head coach Bill Belichick, congratulating him on getting the job as head coach of the New York Giants.

But Flores’ interview wasn’t for another three days. It turns out Belichick thought he was texting Brian Daboll, who is white and ended up getting the job.

Flores told CNN that he went ahead with his interview anyway but wondered whether there was any point. “I got another wave of emotions. You know, is this real? Am I wasting my time?”

The NFL has known for a while that its teams don’t hire enough minority coaches.

The league tried to fix the problem in 2003 with the Rooney Rule, named after the late Dan Rooney, who owned the Pittsburgh Steelers and was the chairman of the NFL’s diversity committee. The rule mandates that a team seeking a head coach has to interview at least one nonwhite candidate.

The league’s numbers speak for themselves, said Nellie Drew, professor of sports law at the University at Buffalo.

“The Rooney Rule, as well-intentioned as it might have been, apparently, is not working. And that’s a problem,” she said.

In the lawsuit, Flores claims that Rooney Rule interviews are a sham — just teams checking boxes. But by filing suit, Shropshire said, Flores is taking a huge risk.

“You have somebody who’s in the prime of his career that steps up and says: ‘This is what’s going on. I am going to probably sacrifice my career to try to move the needle forward on this, this issue of not hiring Black men in the National Football League as head coaches,’” he said.

Shropshire added that the problem starts at the top. There is one Black team president in the league. Only two of the 32 franchises are owned by people of color — and none of them are Black.

“The ability to invest in an inclusive community reflective of fans, reflective of the players. It’s just way too long that we’ve just accepted this is the way things are,” said Maureen Weston, a sports law professor at Pepperdine University in Southern California.

The NFL says Flores’ lawsuit is without merit.

Over the next few months, the league will likely file a motion to dismiss the suit or go to arbitration, according to Michael McCann, a law professor at the University of New Hampshire. But if the judge doesn’t grant either request, what then?

“At that point, it really becomes a threat to the NFL. Because then we go into pretrial discovery, where records have to be turned over, emails, texts,” he said. “Owners, general managers might have to testify under oath, at least in sworn testimony.”

At that point, McCann said, the NFL might decide to settle out of court.