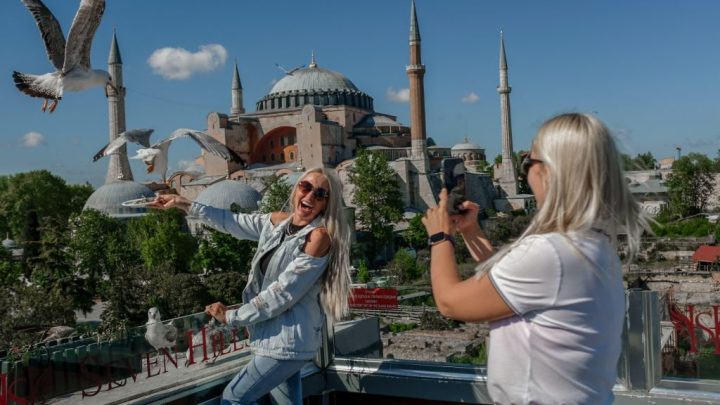 COPY
A Ukrainian tourist poses for a picture near the Hagia Sophia Mosque in Istanbul. Bulent Kilic/AFP via Getty Images

A Ukrainian tourist poses for a picture near the Hagia Sophia Mosque in Istanbul. Bulent Kilic/AFP via Getty Images
Listen Now

On a sunny winter day, an Islamic call to prayer breaks the afternoon silence between Istanbul’s Blue Mosque and the Hagia Sophia.

These centuries-old religious sites help draw millions of tourists to the country each year. In fact, Turkey was the sixth most popular global destination in 2019, according to the World Trade Organization.

Visitors took a nosedive as the COVID-19 pandemic brought the global tourism industry to its knees the following year. But with vaccination rates in developed nations on the rise and travel restrictions loosening, a favorable exchange rate is bringing tourists back to Turkey.

The lira shed nearly half its value last year. This is in large part because Turkey’s central bank and policymakers have chosen to go against traditional economic theory. Instead of using higher interest rates to tackle a persistent rise in prices, they’ve been cutting borrowing costs instead. That’s led to 36% official annual inflation and an economic crisis that’s put a tight squeeze on household budgets.

Life is hard for those living in the country. But for those traveling to it, it’s a different story.

As one Russian couple told me: “It’s really not expensive here. We can go into any restaurant we want. And we really feel super rich.”

According to the nation’s official statistics agency, the number of foreign visitors last year jumped 97.5% from 2020. Although that’s a sign of recovery, tourism spending remains about a third lower than pre-pandemic levels.

The weaker lira is being felt by businesses operating in Istanbul’s Grand Bazaar. The famous market was built in the 15th century and is a top draw for overseas visitors looking for everything from Turkish rugs and light fixtures to souvenir t-shirts, tchotchkes or small decorative objects.

Many shop owners at the Grand Bazaar explained that while business is rebounding, they’re trying not to pass on their higher operating costs — because of the depreciating lira — to consumers.

Some can avoid it and others can’t. One fruit and nut seller explained that he’s noticed discrepancies in the items people buy, depending on where they live. Turkish customers, he said, can afford only sugar-covered dried mango; it’s more than 65% cheaper than the plain dried mango tourists buy.

The pandemic has not only changed how often people travel, but the way they plan their trips.

I went to meet Sebnem Altin, a local tour guide at Grand Circle Travel, for a cup of coffee. She fears some of the temporary accommodations she and other companies made during the pandemic will become permanent expectations for travelers.

“People could just cancel their tours at the last minute and agencies are quite flexible with that, which is something new,” Altin said. “For that reason, even though we have bookings and everything looks really beautifully pink for the coming year, we can never be sure those will be realized. Everything got a lot more fragile than it used to and I am not confident, I have to say.”

Still, bookings are up. Altin is hoping relaxed travel requirements and a favorable exchange rate will lure even more visitors hoping for a slice of Turkish delight.