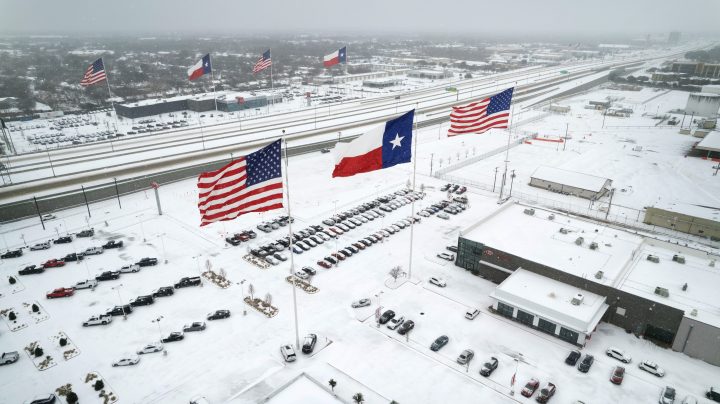 COPY
Snow blanketed Irving, Texas, on Thursday. The storm is reminding Texans of the deep freeze and grid failures that afflicted the state around this time last year. John Moore/Getty Images

Snow blanketed Irving, Texas, on Thursday. The storm is reminding Texans of the deep freeze and grid failures that afflicted the state around this time last year. John Moore/Getty Images
Listen Now

Around this time last year, the electric grid in Texas buckled under the strain of high demand. Blackouts left millions of people without power for days and led to more than 200 deaths.

The state Legislature passed a few bills to try to winterize the grid, and last fall, Gov. Greg Abbott promised that the lights would stay on in the Lone Star State.

​But a few days ago, Abbott walked back that pledge and said that, in fact, “no one can guarantee” there won’t be blackouts.

Now, a winter storm is bearing down, and some Texans are worried about just how reliable the grid is.

The cold front is bringing bad memories for Adrianne Yule. “We have lingering trauma from last year, where we’re really worried about that worst-case scenario happening again,” she said.

Yule lives just north of Fort Worth with her husband, 11-year-old daughter and 7-year-old son. She said that when the power went out at their house last year, the family packed up and went to stay at her father-in-law’s place an hour and a half away.

When they returned home the next day, they were greeted with 2 inches of water in the house. A pipe in their attic had frozen, then burst.

It took more than six months to get the house repaired.

“We have a different plan, though. If something did happen and we lost power for a significant amount of time like we did last year, we would not leave,” she said.

Because of all the damage last year’s storm caused, businesses like Radiant Plumbing & Air Conditioning in Austin have had to adapt. Ken Price is a director of operations there.

“We have technicians that we’ve set up to do virtual calls with customers that have water leaks, you know, and walking them through how to go in and cut the water off,” Price said.

Forecasters say this storm is not as cold, not as large geographically and won’t go on for as long as last year’s, so it shouldn’t strain the system the same way.