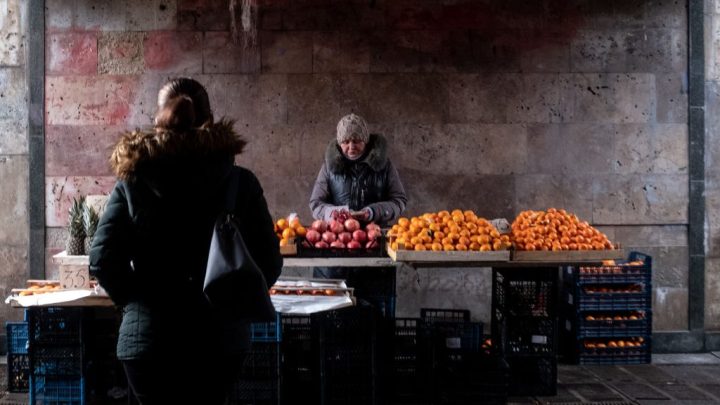 COPY
A woman sells fruit in an underground walkway in Kyiv, Ukraine's capital. There is concern “about the safety of Ukraine as a place to do business," said Peter Dickinson of the Atlantic Council. Chris McGrath/Getty Images

A woman sells fruit in an underground walkway in Kyiv, Ukraine's capital. There is concern “about the safety of Ukraine as a place to do business," said Peter Dickinson of the Atlantic Council. Chris McGrath/Getty Images
Listen Now

Tensions remain high between Ukraine and Russia following the deployment of over 100,000 Russian troops at Ukraine’s border. While there hasn’t been an attack, the Ukrainian economy may be under duress already.

“Marketplace” host Kai Ryssdal spoke with Peter Dickinson, editor of the Atlantic Council’s UkraineAlert blog and publisher of the English-language newsmagazine Business Ukraine, about what’s happening in that nation’s economy. The following is an edited transcript of their conversation.

Kai Ryssdal: So let’s start with the anecdotal, right? When you go out to get a cup of coffee or you go to the market, what’s the economic mood?

Peter Dickinson: There’s not a lot of evidence of any dramatic shifts in the last few months. I think perhaps one thing you’d notice is the Ukrainian currency is weakened slightly. Ukraine has currency booths all over the place for changing money. This is just a feature that they’ve always had here. And so people are often just sort of always noticing what the exchange rate is. And that’s begun to move recently, so that’s often an indication that all is not well. That will probably be the only immediate indication, in fact.

Ryssdal: It’s a little bit like gas prices here. What about some of the other headline numbers like inflation, unemployment? What’s the general state of play?

Dickinson: Inflation is troublesome at the moment, but that’s been the case for some time. That’s not a direct indicator of where we are now, in terms of Russia and the invasion scare. The main issue that they’re facing now, I think, is in terms of lending and Ukraine’s position on international markets — that the country is now facing very high costs to [borrow] and actually an outright refusal in a lot of cases. Companies aren’t able to finance themselves.

Ryssdal: What do you make, then, of Ukrainian President Volodymyr Zelenskyy apparently saying to President [Joe] Biden the other day, “Look, lay off the invasion talk. It’s affecting our economy”?

Dickinson: Yeah. It’s different audiences, different messages, I think you could say. I mean, I think from an international point of view, the message is very clearly, “This is a major emergency.” Whereas from Ukraine’s point of view, they are already seeing the negative economic impact of that. And so they’re also keen to say, “Hold on a minute, let’s not create too much of a panic internationally around Ukraine because it’s costing us huge amounts of money.” And it’s also reducing the prospects we have looking ahead. And you also need to bear in mind from a Ukrainian point of view is that Ukrainians have lived with the Russian threat for eight years, so they’re not as shocked by the current buildup. But also, there is a school of thought in Ukraine that actually Russia’s objective at the moment, one of the key purposes of the current buildup, is to create panic. They’re not saying that there is no threat; I think they’re saying, “Well, hold on, let’s not play into [Russian President Vladimir] Putin’s hands here by creating a panic.”

Ryssdal: Assuming we, you all get through this crisis peacefully, what do you make of Ukraine’s prospects of turning economically toward the West? Because that’s clearly where Zelenskyy and his government want to go.

Dickinson: Yes, absolutely. This is where Zelenskyy and his government want to go. I think it’s where the majority of Ukrainians want to go based on the results of successive elections at the local and the national level. The main challenge they face — well, one of the main challenges — is in terms of international confidence in Ukraine. So there is huge concern about the safety of Ukraine in terms of as a place to invest and do business. If we look at the Ukrainian economy, in terms of just how it’s performing, how it can perform, I mean it showed a remarkable resilience over the last eight years since the [Crimean] conflict began in 2014. And that was largely fueled by the agricultural sector, which is very, very strong. But they will face huge challenges in terms of attracting investment, and there is a school of thought — I would say probably a consensus even — that without a lot of international investment, the growth Ukraine can expect to achieve is not gonna be enough to make that sort of the huge leap that the country is looking to make.

Dickinson: Well, you’d be surprised, actually. I think one quality that Ukrainians have in abundance is stoicism. They are very, very resilient. And I should also point out, you know, since the fall of the Soviet Union, things have also been highly unstable. Crisis is almost the default position for Ukrainians. They will come through one way or another, but they could be doing a lot more. Obviously, this is not very helpful.