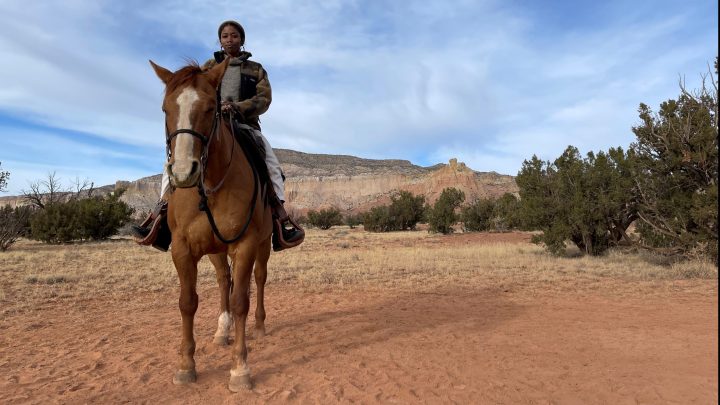 COPY
Atiya Jones rides a horse in New Mexico during her grant-funded "gap year." "My work is deeply inspired by the things I see," she said. Courtesy Atiya Jones
My Economy

Atiya Jones rides a horse in New Mexico during her grant-funded "gap year." "My work is deeply inspired by the things I see," she said. Courtesy Atiya Jones
Listen Now

In the early months of the pandemic, Atiya Jones, a visual artist based in Pittsburgh, put her creative energy into making protective face masks.

“My home became a factory,” she told Marketplace in 2020. “But it also felt really strange to be able to sustain my livelihood on the effects of a pandemic.”

Recently, her career has taken another turn.

“I distinctly remember missing myself,” she said. “I missed making art that was not for sale, just art that I needed to get out of my body.”

Jones, along with another artist named Adil Mansoor, applied for a grant asking candidates to identify an issue that they became aware of throughout the COVID-19 pandemic.

“And an issue that I feel I have always run into professionally is not having time,” Jones said.

Many professional creatives — particularly queer artists of color like Jones and Mansoor — support themselves largely through gig work and small grants. Cobbling together a living this way can be time-consuming.

Inspired in part by the idea of a “gap year” that students sometimes take between high school and college, Jones and Mansoor proposed a fellowship program called Time Sensitive, in which two artists would receive financial support for one year to spend however they see fit.

“It isn’t a project-based fellowship. It’s more so related to the gap year and certain points of privilege that a lot of queer and BIPOC creatives do not have,” she said.

Jones said the stipend they’re receiving is comparable to working a $15-an-hour job for 40 hours a week.

“It’s a life-altering amount of money for the two of us,” she said. “But at the end of the day … time is the grant.”

Jones said that flexibility has enabled her to travel, learn how to drive and create artwork that makes her happy.

“I look at a lot of my old work and it feels really emotionally chaotic,” she said. “And the things that I make right now are kind of fun! They make me feel fun, and I have a better time in creating.”

Now, Jones said, one of her goals is ensuring the grant gets funded for another year.

“I feel really fortunate to be in this position and to essentially have created this for myself,” she said. “As I’m experiencing my own self-led fellowship, I’m also trying to find ways to make it a reality for someone else.”