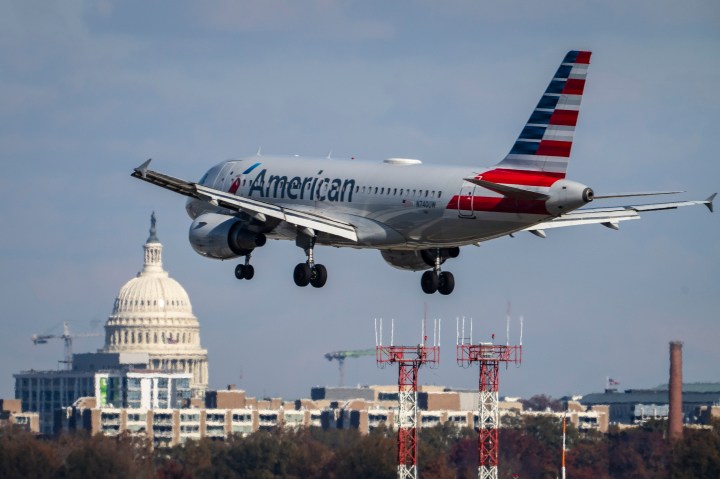 Have an 8:02 a.m. flight to catch? Drew Angerer/Getty Images

The COVID-19 crisis has created unpredictable flight schedules, with thousands of flights canceled as the omicron variant surges.

The virus is now part of the myriad factors airlines must take into consideration when scheduling flights, whose departure and arrival times can seem arbitrary or oddly specific.

“Having worked at various airlines, I can tell you if you apply logical thinking to almost anything that the airline industry does, you’ll drive yourself crazy,” said Henry Harteveldt, an analyst with Atmosphere Research Group who joined Marketplace to explain how scheduling works.

What determines departure and arrival times?

With that caveat, he said there are a series of factors that determine departure and arrival times. Along with the all-important question of how long it takes a plane to travel from point A to point B, including the time a plane needs to taxi from the gate to the runway, airlines must also consider possible delays, other planned departures happening around the same time, connecting flights, the times when people want to fly, the amount of time a plane needs to be serviced (including fueling and cleaning) and crew schedules, among other factors.

If a plane leaving two minutes later means it will get stuck in a wave of other departures, the airline may decide to push it out two minutes earlier, Harteveldt said.

It’s all a balancing act.

“We have to look at airplanes as the airlines’ factory, and the airline wants that factory to be in operation for the greatest amount of time,” Harteveldt said.

There are certain airports, like LaGuardia Airport in New York and Ronald Reagan Washington National Airport, where takeoff and landing slots are assigned to airlines, and the airline has to schedule its flights within those parameters, Harteveldt said.

To determine scheduling, he said that airlines use their own software.

“What happens is the airlines really focus on maximizing the efficiency of the airplane. And frankly, they don’t pay that much attention to the logic of the clock,” he said.

Airlines have the most scheduling control during the first departure of the day, he noted, when they could set the departure time for a flight at, say, 6:45 a.m. or 7 a.m.

But he said airlines ultimately want to optimize their schedules, and that means making some compromises.

“That may mean that you send a plane to a destination at a weird time, 3:03, rather than three o’clock or 3:05,” he said. That’s because the airline is considering the number of workers on the ground, the possibility of unnecessary delays and the obligation to arrive on time, he explained.

“At the airline, the airplane is the focus, not the customer,” Harteveldt said.

Crew time is a vital factor, he added. Federal Aviation Administration rules dictate how many hours pilots and flight attendants may work. And, Harteveldt added, if they’re represented by a union, duty time may be shorter. Currently, flight attendants must rest nine consecutive hours, a length the FAA has proposed extending by an hour.

But not all flight times are based solely on logistics. Sometimes, airlines can have a bit of fun with their scheduling.

“When I worked at Continental, we sent a flight from Houston to New York at 2:12 in the afternoon because that was the New York area code,” Harteveldt said.

Harteveldt also pointed out that some airline routes set more clearly defined departure times, leaving on the hour or half hour, such as Northeast shuttles between Boston, New York and Washington. Hourly flights, favored by business travelers, have been “the distinguishing characteristic” of these types of shuttles since the 1960s, and their scheduling has become “almost a sacred cow,” The New York Times has reported.

With the COVID-19 crisis, Harteveldt said airlines have gone from increasing the amount of time that planes are on the ground — in order to thoroughly clean them — to decreasing that amount of ground time toward pre-COVID standards now that they’ve become more efficient at cleaning.

“Airlines are a great example of what in business is called the just-in-time philosophy,” he said. “You want to allow enough time for the work to be done and to be done to an acceptable level of performance. But if you schedule too much time, you reduce your productivity and you eat into your potential ability to make money.”