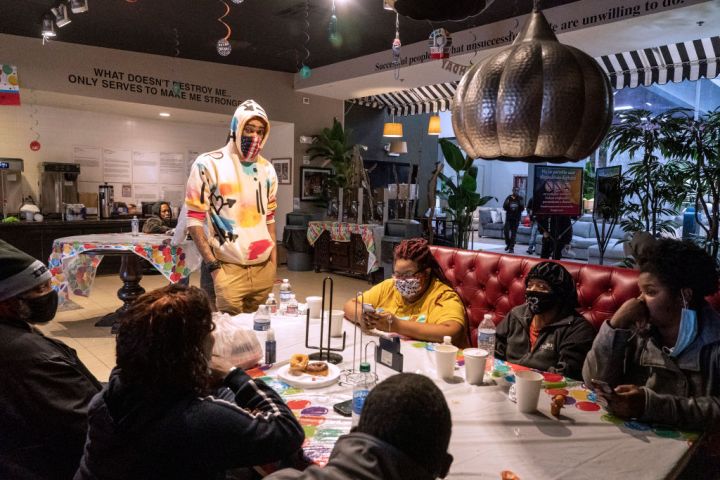 COPY
During a period of extreme cold in February, people took shelter at a store in Houston that was transformed into a warming station. The drop in temperature caused a widespread and prolonged power outage. Photo by Go Nakamura/Getty Images

During a period of extreme cold in February, people took shelter at a store in Houston that was transformed into a warming station. The drop in temperature caused a widespread and prolonged power outage. Photo by Go Nakamura/Getty Images
Listen Now

Following widespread power outages in Texas last February, a lot of attention was put on where supply failed and how the Electric Reliability Council of Texas, or ERCOT, is structured. Those are important, but a new working paper is turning attention toward the demand side of things.

Marketplace’s Andy Uhler spoke with one of the paper’s authors, Blake Shaffer. Shaffer is an economics professor at the University of Calgary in Canada and a former energy trader. Below is an edited transcript of their conversation.

Andy Uhler: I think what this paper is trying to tell us to do, correct me if I’m wrong, is to look at the other side, right? We need to think about demand when we’re thinking about how the electricity grid works. Yeah?

Blake Shaffer: Yeah. Nice summary. I think, I think the answer there is in the aftermath of that February event, all the conversation was about supply. As one would expect, it sort of devolved into a bit of a blame match as to, you know, which segment of supply was at fault. And trying to understand that and, and ours is really just shedding light on the fact of, you know, hey, folks demand’s increased quite a bit. More specifically, the sensitivity of demand to cold temperatures has risen a lot. And we need to take that into account when we’re thinking about our future needs.

Uhler: There’s also an element here of efficiency, right, turning toward more efficient heat pumps. I guess just sort of thinking about the way that we’re actually using that energy that’s being distributed to us.

Shaffer: Yeah, this came up a lot in people discussing our article. We’re looking at this increase in sensitivity to cold temperatures, really motivated by the fact that the share of homes in Texas heated by electricity has risen by about 10 percentage points. But most of that is pretty inefficient resistance heating: baseboard heaters, space heaters and the like. As that becomes heat pumps, and heat pumps are much more efficient, so what we should find is kind of two things. One is the demand for energy overall in cold temps won’t be as extreme as what we’re estimating here. That’s a good thing. But a lot of folks brought up that, you know, at the real extremes, a lot of the heat pumps that are in place, are likely to be in place in Texas, they struggle at those temperatures. There’s other options, though. There’s heat pumps that work better in cold temperatures. And that’s something that would need to be thought about in Texas.

Uhler: One of the things that co-author of this paper Josh Rhodes and I talked about is sort of this idea of did the Texas Legislature, did sort of regulators do enough to make sure that an extreme event like that doesn’t cause sort of the breakdown that it did in February. And he told me, and I’m curious to get your take on this too, probably, you know, this year, it’s not going to get as cold. And so we’re not going to have that sort of empirical evidence of did they do enough?

Shaffer: What I think we’ll find is, most likely, it won’t be as extreme. I mean, those extremes don’t occur, you know, every year. And what you’ll find, of course, is that, you know, one year removed, well, “Maybe we don’t want to spend as much money on reliability.” But two years out, “I don’t even remember that issue.” And we know this because as people dissected the problems of 2021, they went back to the history of 2011 in ERCOT, and then the challenges there and all the proposals of how to fix it that never saw the light of day. And they think it’s, you know, if you make it through the next winter, there’s not much motivation for politicians to add costs on to the power system to consumers. That’s not a winning strategy. And so that may well be the case. I think Josh is probably correct, and that we might skirt through a winter and then the, then this sort of focus on this will slowly dissipate.