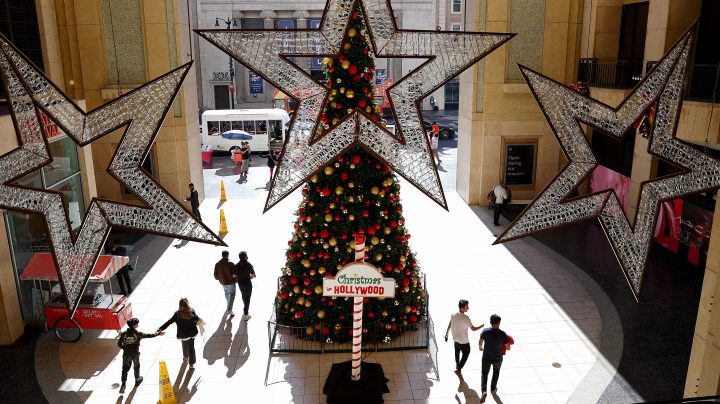 COPY
For many Americans during the holidays this year, there can be a disconnect between how they are doing financially and how they feel about the economy or how freely they spend. Mario Tama via Getty Images

For many Americans during the holidays this year, there can be a disconnect between how they are doing financially and how they feel about the economy or how freely they spend. Mario Tama via Getty Images
Listen Now

After the rough beginning of the pandemic, it seems that Americans are getting back on their feet. Many are saving more money, starting new businesses and choosing career paths they enjoy. However, this holiday season may not be merry and bright for everyone.

Prices for a whole host of goods — like food, cars and other holiday gifts — are rising, and the omicron variant of the coronavirus has made gathering together more confusing than ever. Even though many are taking home more money and may be more financially stable, some are cutting back their holiday spending.

The Wall Street Journal’s Veronica Dagher spoke with four families about their budgets as they head into the second holiday season amid COVID-19. Dagher joined Marketplace’s Amy Scott to discuss what her reporting reveals about the larger economy. The following is an edited transcript of their conversation.

Veronica Dagher: It was really important for us to pick a nice, diverse group of people that reflected so much of what’s happening in the country today. You know, we spoke to a young woman who was a beneficiary of the student loan repayment pause. I mean, that’s a big issue for a lot of young people right now. We spoke to an entrepreneur. A lot of people are starting businesses. We spoke to somebody who did a big reinvention. And I think that was a lot of people’s dreams for this time in the pandemic — some people actually realize that dream. And then we spoke to a guy who, you know, said pretty much business as usual. And so I think that’s also the case for a fair amount of people.

Amy Scott: Yeah, let’s dig into a couple of these stories. You talked about student loans. I think you were speaking about Ashley Paredes, who is saving money but actually plans to spend less this year on the holidays. What’s behind that decision?

Dagher: Well, you know, I really admire her. She has a young child, an 18-month-old daughter, and she wants a better life for her. So in reality, you know, Ashley could go out there, be spending more money because she’s not having to fork out so much in student loans these days. But she says, you know, “I got an opportunity that I’ve never been able to have before.” She was able to pay down $5,000 worth of credit card debt over the course of a year. She said in any other circumstances, “I wouldn’t be able to do that. This has been a gift. So, now that I’m credit card debt-free for the first time in about three years,” she told me, “why would I go out and rack up more debt when I’m in probably one of the best financial situations I’ve been in in years?”

Dagher: No, I think there’s a few. I think Ashley’s model of not necessarily needing to rack up spending when you don’t feel like you need anything to prove. So you don’t necessarily have to spend your money just because you have one. I think that’s a big takeaway. For the entrepreneurs out there, I think the big takeaway is, you know, it’s great to start a business. We’ve heard so many people doing that this year. Awesome — but know that there’s a lot of challenges, especially this year, for entrepreneurs. Also one of the people we spoke to, Lara, she did a reinvention. She moved from New York City to a farm in Oregon. Big picture: If you’re thinking about a reinvention, a big, you know, sort of ripping up of your lifestyle and your life, try to really dig into how much that’s going to cost you and [if] you have the stomach, so to speak, to deal with those vagaries.

Scott: I think your story also speaks to this disconnect that we see between how people are doing financially, at least by the numbers, in this economy and how they’re feeling. I mean, as you write, “Americans are sitting on cash, watching 401(k) balances rise, starting millions of new businesses, and enjoying their pick of jobs.” And yet, you know, three out of the four folks you talked to are being more cautious this holiday season.

Dagher: Right, in certain aspects of their life, they’re struggling a little bit. I mean, I think there’s a lot of people out there who have faced these serious financial difficulties. And I don’t think we can underestimate the psychological impact of this ongoing pandemic. There’s just always this thing in the back of your head, like, “Are things gonna shut down? Am I going to have to get out of work because of a health emergency because of this COVID thing that doesn’t go away?” You know, I think there’s that reluctance and that caution that is affecting not only our concerns about our health but also our finances. That’s a big cloud over many of us.