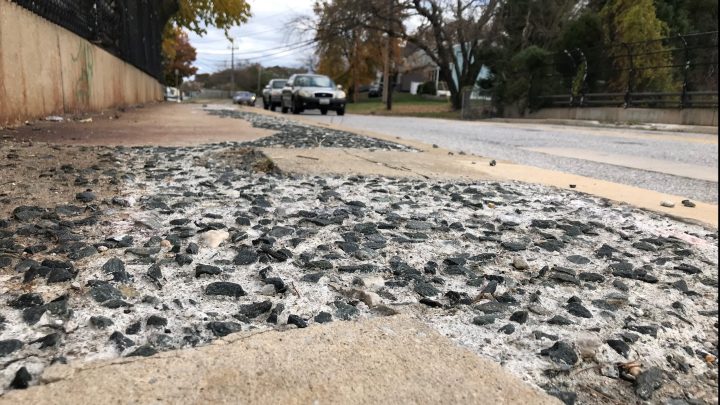 The roads and bridges due to be repaired under the infrastructure bill that President Joe Biden signed into law will take a beating over the next few days, below the wheels of bumper-to-bumper Thanksgiving travelers.

To go over the river and through the woods to grandmother’s house, you have to cross a bridge — lots of bridges, in my family’s case. We’ll be traveling the busy corridor between the Washington, D.C., area and upstate New York.

I tend to worry about things. So, it’s time for a bit of a dry run for just the first leg of our trip. I head toward Baltimore to meet someone from the American Road & Transportation Builders Association, a construction trade group. As of March, there were around 10 interstate bridges in Maryland deemed structurally deficient, according to the builders association.

Michael Sakata heads the association’s Maryland chapter. Sakata and I meet at the 60-year-old Putty Hill Avenue Bridge, which my family and I will drive under on our trip. The bridge looks terrible; big chunks are missing from the sidewalk.

Sakata runs bits of sand and gravel through his fingers. “This is definitely the structure, the guts of the material, if you look at these rocks, which are used to create the concrete,” he says. “So, we’re looking at exposed concrete here — yeah — which is not good.”

Sakata and I want to peer underneath the bridge, but it’s fenced off. I’m wondering if, say, a chunk of it could fall off and smash through a windshield. Sakata explains that a structurally deficient bridge isn’t necessarily unsafe. The sidewalk of this bridge is crumbling and the roadway has been patched many times, but the skeleton underneath is OK.

State engineers regularly inspect bridges’ steel and concrete substructures for cracks, Sakata says. Those would not be OK.

“If a bridge, to your point, is unsafe, it will be closed,” Sakata tells me.

Furchtgott-Roth is a former Department of Transportation economist now teaching at George Washington University. She says Maryland can expect about $400 million worth of infrastructure money for bridge repair and replacement. But what about the rest of our trip?

“You’re also going to be driving through Delaware,” Furchtgott-Roth muses. Right, I say. She continues: “And Delaware can expect to receive $225 million for bridge replacement and repairs.”

New Jersey and New York will get hundreds of millions more. Good thing, because we’ll be driving on Interstate 80, which had two structurally deficient bridges in New Jersey, as of March. Furchtgott-Roth says New York has its problems too.

So state officials have a mileslong to-do list. But construction won’t start for a while.

“So you can see projects that start being built — ground being broken — over the next couple of years. That could continue for five or six years into the future,” says Byron Brown, a lawyer and lobbyist at the Washington law firm Crowell & Moring.

Brown would like the construction to start sooner because he could be on the road too this Thanksgiving. He’s thinking about driving up to New Jersey.