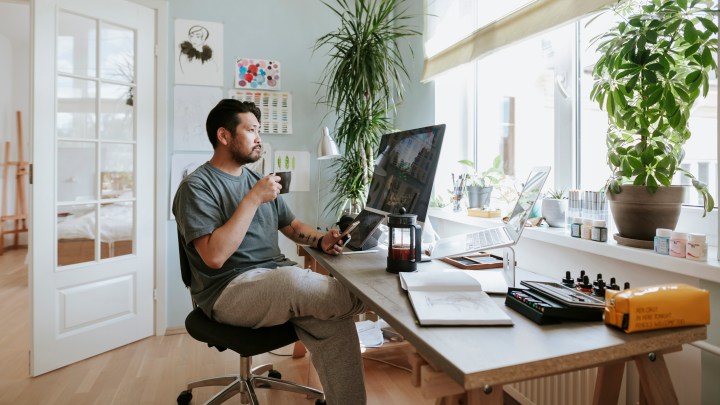 COPY
With many companies embracing work-from-home or hybrid models, some are creating leadership positions to focus on the transition. visualspace via Getty Images
COVID-19

With many companies embracing work-from-home or hybrid models, some are creating leadership positions to focus on the transition. visualspace via Getty Images
Listen Now

Ashley Rader’s job as director of remote workforce solutions has a lot of functions. Her favorite is figuring out how remote work can redefine the 9-to-5 and how that flexibility can give some people more equity in the workplace.

“There’s the part that’s so exciting. You’re thinking of completely new ways of working and these big dreams,” she said. “Then there’s, like, just the practical piece of, like, OK well now we have to update everybody’s tax records.”

There’s a lot of paperwork — and a lot of basic questions: Do employees have a good internet connection? Do they need new equipment? Where are they even living these days?

As more companies look toward a flexible workplace, many are deciding they need to appoint a specific person to manage it. Facebook has a director of remote work, LinkedIn has a VP of flex work and Dropbox has a head of virtual first.

Rader became Cleveland Clinic’s first hire to oversee remote work in February, a year into the pandemic. Now, more than 10% of the medical center’s employees, or 8,000 people, are working hybrid or remote, with most of them on the administrative side of health care. For Rader, this isn’t a temporary solution. It’s the future.

Peter Cappelli, a professor of management at the Wharton School, has been studying remote work since it had a different name: telecommuting. He’s seen interest in it rise and fall. But this is the first time he’s noticed companies creating senior positions to manage it.

“I don’t think I’d ever really heard of one [before the pandemic], to be honest,” he said. “Generally I think these, you know, special-purpose job titles at the executive suite are kind of silly, and it’s a marker of nothing’s going to happen there, right? But I think in this case it probably is sensible.”

He said companies with large remote workforces need people with deep backgrounds in communications and human resources to overhaul logistics, company culture and performance management, because the trickiest piece is making sure employees stay engaged and keep growing.

But he’s skeptical that remote work will fully catch on.

“I think at the moment we have lots of employers who are talking about doing something hybrid. The smart ones maybe are saying we’re gonna experiment,” he said. “But I think, frankly, most of them are watching to see what everybody else does.”

There are companies that were fully remote before the pandemic.

“I’ve spent my fair amount of time in a Zoom box or on a microphone,” said Darren Murph, who’s been the head of remote at the software company GitLab since 2019.

He started to understand the benefits of remote work a few years ago, when he and his wife adopted a newborn.

“Definitely working at night a lot, definitely taking more midday naps. But the ability to work around the clock is superuseful when you’re a new parent,” he said.

And the benefits aren’t just for employees. He sees remote work as a tool to recruit talent.

“The ability to hire the best person for the role, no matter where they were, was very powerful,” he said.

GitLab has taken advantage of the opportunity. It has more than 1,300 workers in 65 countries, but no offices. That’s one of Murph’s big opinions about this — it’s remote or nothing, and if a company is going the hybrid route, that’s all the more reason to hire someone like him to manage it.