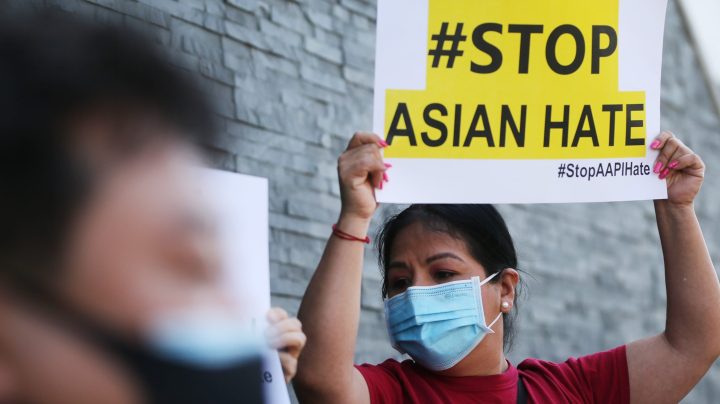 Asian Americans are the fastest-growing racial or ethnic group in the United States, according to 2020 census data. The Census Bureau’s definition of this group is broad; it includes anyone “having origins in any of the original peoples of the Far East, Southeast Asia or the Indian subcontinent.”

In a new book called “The Loneliest Americans,” journalist and author Jay Caspian Kang argues that lumping Asian Americans together under one identity can be limiting.

“I don’t really think that a racial identity among Asian Americans exists in the same way as that it exists amongst Black Americans, for example,” he told Marketplace’s Kimberly Adams. “Thinking about things in terms of class is a lot more convincing, at least to me.”

Click the audio player above to hear Adams’ conversation with Kang about the Asian American wealth gap, the role of small-business ownership in shaping Asian American identity and the evolution of the term “people of color.”

The following is an excerpt from “The Loneliest Americans.”

Sometime in the years leading up to the Korean War — ­the exact dates are unknown or, perhaps, obscured — ­my mother’s father was slated for execution. He had been born and raised in a village in North Korea and was working as a civil servant when the Communists took over in 1945. Over the next three years, my grandfather attended a handful of anti-­Communist meetings. For that, he was branded as part of the intelligentsia and subjected to routine harassment. The news of his execution orders were relayed to him by a friend, who claimed to have seen a list somewhere. A few days later, my grandfather dressed up as a fisherman and hopped on the back of a delivery truck to escape to the south. He left behind my grandmother, my oldest aunt, and an uncle. My grandmother and her kids followed on foot a few months later, accompanied by a family friend. She faced, at the time, an impossibility of circumstance, and I’ve wondered whether she, like Lot’s wife, ever considered looking back at the family and friends she was leaving behind. These dilemmas, which shape our crude and ultimately conditional allegiances to family, duty, and our futures, are usually foisted upon the young, who lack the vocabulary to describe what is happening to them.

My grandmother, aunt, and uncle reunited with my grandfather in Seoul and then made their way to a makeshift refugee camp outside the city. They weren’t alone. In the years before and during the war, 10 percent of the entire population of North Korea — roughly one million people — ­escaped to the south. They formed their own refugee communities outside of mainstream South Korean society, which regarded them with general suspicion. But any plan for assimilation into the newly formed nation would be disrupted on June 25, 1950, when North Korean forces led by Kim Il-­Sung, the grandfather of Kim Jong-Un, began an artillery attack on the south and a military push that captured Seoul. Two weeks before my mother was born, General MacArthur, who was in charge of the American troops, launched an amphibious attack at Incheon and pushed quickly up to Seoul. My mother was born amid artillery fire, but when she was three days old, Seoul had been liberated from North Korean forces.

Nobody on my mother’s side of the family has anything to say about the war. They are either dead, somewhere in North Korea, or in the United States. My grandmother never spoke of what happened during those years, and my mother was too young to remember. They knew that two million people died. My uncle died of typhus during the war, but nobody talked about that, either. All they said was that when he died, my grandfather wrapped his body in a blanket and disappeared for three days. He apparently told my grandmother where he buried the body only when he was in his sixties, hobbled from diabetes and near death himself. The men in their refugee village went into the forests, chopped down wood, and burned it to make charcoal to sell. My mother says she can recall the image of a man covered in soot standing in the entryway to their shack, but she isn’t sure if this is a real memory or her mind’s struggle to make visual sense out of whatever her own mother had let slip about those years. This is not uncommon, of course, but I mention it only because if I wanted to tell my daughter that all this death — ­her great-­uncle and all the hundreds of friends and relatives left behind in the north —­ was her inheritance, I would have to look at a history book.

After the war, my mother’s family moved to Seoul, where my grandfather found work as a scavenger. Every morning, he would go to the U.S. Army base in Itaewon, find discarded surplus, load it up on a cart, and sell it on the streets. This quickly turned into a storefront, which, in turn, briefly became a profitable business. I never really knew him, but looking at photos, I can see he had dark skin, which explains, I suppose, how my sister and I turned out to be several shades darker than our parents.

On July 27, 1953, the war ended with an armistice agreement that established the demilitarized zone on the 38th parallel. It would take decades for my grandparents to realize that they would never see their friends and family again. At my grandmother’s funeral in 2019, my father, who had known her since he began dating my mother at the age of nineteen, noted that while my grandmother complained all day long about everything — ­from the indifference of her grandchildren to the quality of produce in Los Angeles — ­she seemed to have completely blocked out the three decades she spent in South Korea. The years between fleeing the north and moving to Los Angeles had effectively been erased. My mother and the four siblings who were born during and directly after the war have no idea how their own mother felt about the family’s uprooting and brief fortune, but they all deal with adversity in a similarly pragmatic way. Problems are just things to be solved. Trauma was an abstract concept that reflected a weakness of will.

During a rather whiny phase when I was five years old, my mother dragged me to a homeless shelter in Cambridge so I could witness the lives of the less fortunate. This is one of my earliest memories: the smell of defeated, collapsed bodies suffering from drug addiction and the clean brick walls. What strikes me isn’t that she chose to do this at such a young age but that she, in effect, swapped out our family’s narrative for the suffering of strangers.

Years later, when I was in my early thirties, my parents showed me photos of Seoul during their early childhoods — shacks lined up on the banks of the Han River; the makeshift architecture of a city under constant siege —­ and talked a little bit about how hard it was for them to eat a decent meal, the impossibility of finding consistent nutrition. When I asked my mother why she hadn’t told us about any of this, she said postwar Seoul would have been too foreign for me to grasp and that I needed examples from my own life, which, upon reflection, was right.

Will my daughter care about any of this? History, in some ways, is a choice; my parents chose to deprive their children of the past. Since we never learned about the Korean War or Japanese imperialism or any immigration stories outside of Ellis Island in school, my sister and I did not really know that we could pinpoint ourselves within a linear history of oppression. My daughter’s connection to these histories will be even more abstracted, not only by time but by a more compelling identity as a mixed-­race kid of the second and fourth generation of Korean and Jewish immigrants.

And yet she does have an American history, one that extends beyond her own family. For most of the Asians in America, that story begins on October 3, 1965, when President Lyndon B. Johnson stood in front of the Statue of Liberty and said something that would be proven wrong. “This bill that we sign today is not a revolutionary bill,” Johnson said. “It does not affect the lives of millions. It will not reshape the structure of our daily lives.” He was referring to the Hart-­Celler Immigration Act, a landmark piece of legislation with a lengthy history dating back to the 1930s and efforts to open up immigration quotas for Jewish Europeans fleeing the Nazis. Its opponents at the time described apocalyptic scenarios in which the United States and its white population would be overrun by a horde of foreigners. Johnson, for his part, assured the public that the easing of restrictions would have only a mild effect on the demographics of the country. Most people, he believed, would stay in their home countries.

Over the next five decades, the Hart-­Celler Act, which lifted tight restrictions on immigration from previously “undesirable” countries, would bring tens of millions of new immigrants from Asia, southern and eastern Europe, and Africa. No single piece of legislation has shaped the demographic and economic history of this country in quite the same way.