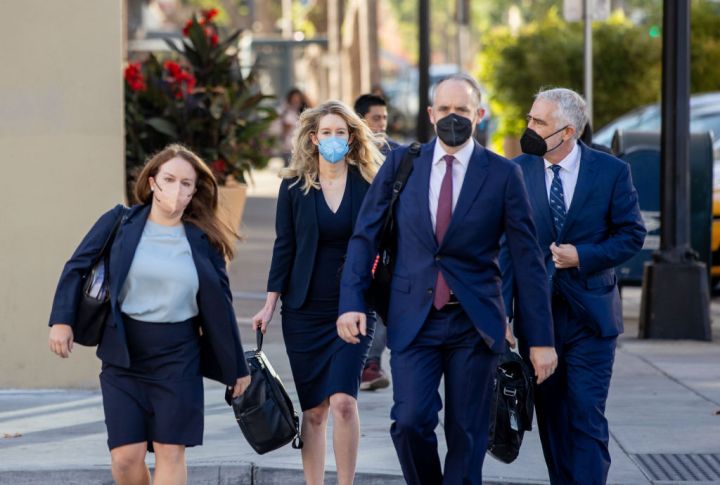 COPY
Theranos founder Elizabeth Holmes arrives at the Robert F. Peckham Federal Building with her defense team on Aug. 31, 2021 in San Jose, California. Holmes is on trial after being indicted on multiple counts of fraud for misrepresenting her company's blood-testing technology. Ethan Swope/Getty Images

Theranos founder Elizabeth Holmes arrives at the Robert F. Peckham Federal Building with her defense team on Aug. 31, 2021 in San Jose, California. Holmes is on trial after being indicted on multiple counts of fraud for misrepresenting her company's blood-testing technology. Ethan Swope/Getty Images
Listen Now

The trial of Elizabeth Holmes, founder of the failed blood-testing startup Theranos, continues this week in San Jose, where former Safeway CEO Steven Burd finished testifying and former Walgreens CFO Wade Miquelon took the stand. Both witnesses were called by the prosecution, who argued that Holmes intentionally deceived investors, retail partners and the public about the capabilities of Theranos’s technology.

Marketplace Morning Report’s David Brancaccio spoke with Adam Lashinsky, the Business Insider contributor who is covering the trial from the Bay area. Below is an edited transcript of their conversation.

Adam Lashinsky: We learned from Steve Burd, the former CEO of Safeway, the narrative of how Safeway first came to be working with Theranos. Safeway had big eyes that it was going to put blood testing clinics in its stores around the country, this would be a way for Safeway to boost sales to make more money.

David Brancaccio: Yeah, as you say, they’re pretty eager here. They invested like $275 million to remodel all these stores to make room for Theranos units. What do they hope would happen?

Lashinsky: Well, from a business perspective, it was a really interesting conversation, if not from a legal perspective, he drew a direct comparison with when Safeway put gas stations in its parking lots and boost sales by 6%. And so he assumed people would come here, have a really quick finger-stick blood test – as opposed to having a needle stuck into your arm, they would wait around 20 to 30 minutes – and while they got the results, well, what do you think they would do during those 20, 30 minutes, David, they will go shopping for groceries. So this was the dream. Obviously, it never happened.

Brancaccio: Yeah, I mean, too bad. The units didn’t perform as advertised. So the defense tried to poke holes in the Safeway boss’s testimony, using what you might call the “lazy car buyer” defense, essentially saying Safeway didn’t do their due diligence. I mean, how did that go over? Safeway is a grownup outfit, they must have done some due diligence.

Lashinsky: There absolutely was. But what has become a theme at the trial is that their primary contact at Theranos was Elizabeth Holmes. And so Safeway and Burd himself certainly did due diligence. But were they given the straight dope from Theranos and from Elizabeth Holmes? The defense is trying to show, “you had ample opportunity to assess this technology, whether or not it was going to work, and you failed at that.”

Brancaccio: Now, the former Walgreens chief financial officer Wade Miquelon also testified this week about that company’s failed partnership with Theranos that resulted in tens of thousands of blood tests that had to get written off and voided. What might have jurors gotten from that part of the testimony?

Lashinsky: Well, the Walgreen CFOs testimony was very similar in many aspects. If anything, I think the defense scored some points with the Walgreen CFO because Holmes’s lawyer was able to enter evidence that showed that Walgreens understood after a period of time that Theranos had moved away from this finger-stick method, which wasn’t the original agreement. This wasn’t the original vision, Walgreens knew this. I think that will help the defense make their case at least a little bit.