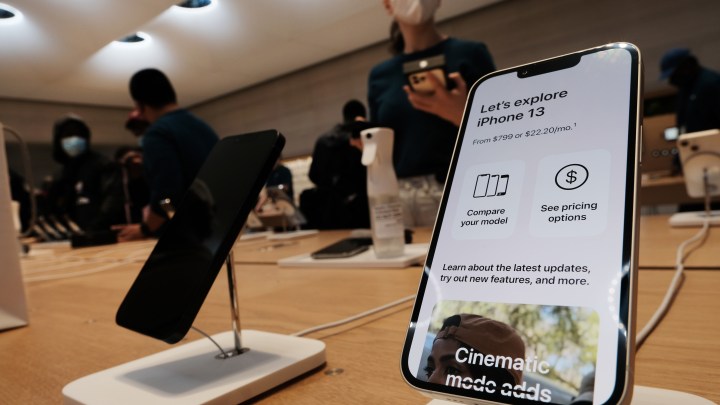 COPY
iPhone may cut production of some iPhone 13 models in response to the semiconductor chip shortage. Spencer Platt via Getty Images

iPhone may cut production of some iPhone 13 models in response to the semiconductor chip shortage. Spencer Platt via Getty Images
Listen Now

The global computer chip shortage has finally caught up to Apple, according to reporting by Bloomberg. The company’s likely to cut production of its iPhone 13, putting it in the same boat as the automotive and appliance industries, among others.

Until now, Apple had managed to stay above the fray and ahead of the shortages because of its size.

Apple could end up producing 10 million fewer of its brand new iPhone 13s this year than planned, according to Daniel Ives at Wedbush Securities. That’s telling, Ives said.

“They, up to now, have really seemed to have Teflon-like ability to navigate the chip shortage. But, ultimately, midnight struck on the clock and we’re seeing the result accordingly,” he said.

It’s not because demand for the new iPhone isn’t there; Apple just can’t get some of the parts to make them — and one missing part is all it takes. In this case, said Chris Caso at Raymond James, it’s a camera assembly made in Vietnam.

A hiccup like that can throw the whole supply chain off, Caso said. “With very tight supply conditions everywhere, there’s just no more slack in the system.”

Once consumers see the delivery time for the phone they just bought is something like six weeks, that’s something they’re starting to realize, Caso added.

Not only are supply chains fragile, “there really is very little control over a lot of the determining factors that are dictating major delays in lead times,” said Scott Kessler at the consultancy Third Bridge. “That, frankly, is having a substantial impact on a variety of companies.”

Apple will probably weather this storm better than most, Kessler said, but he expects tight supply chains will be the reality well into 2022. We could even be talking about them in early 2023.