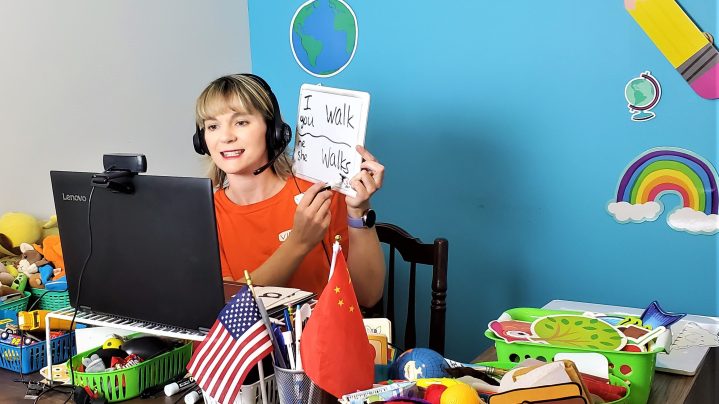 COPY
ESL teacher Kristen Peele during a VIPKid lesson with a student in China. She depends on the income to support her three children. Courtesy Kristen Peele

ESL teacher Kristen Peele during a VIPKid lesson with a student in China. She depends on the income to support her three children. Courtesy Kristen Peele
Listen Now

Minnesota native Hillary Ross has been traveling around the world thanks to the money she earns by teaching English online to children in China.

Most recently, she was with the Chinese platform GoGoKid from ByteDance, creators of the short-video app TikTok.

“I like what I had read about GoGoKid. I received an offer that was better than I’d received at other companies,” she said from Peru, adding that the firm provided her with the flexibility to decide her schedule from week to week. “I never thought that it would end from one minute to the next.”

On July 24, China’s government issued a policy to rein in the multibillion-dollar academic tutoring industry and turn it into a not-for-profit sector. U.S.-listed stocks of major Chinese education platforms — such as TAL Education Group, New Oriental Education and Technology Group, and Gaotu Techedu — dropped by 70% and have still not recovered; investors lost out.

The policy also leaves at least tens of thousands of American and Canadian teachers of English as a second language in limbo, including Ross.

A couple of weeks after the policy announcement, Ross finished classes and was writing student feedback in the GoGoKid system when a message popped up on her screen.

“It was something … like, ‘Starting tomorrow, there will be no more classes,’” she said. “I had no way to communicate with kids that I had taught and become close to for well over a year.”

The policy, called “Opinions on Further Reducing the Burden of Homework and Extracurricular Training for Students” from grades one through nine, bans tutoring on core subjects such as Chinese, English and math on weekends and school breaks. It also prohibits hiring foreigners based outside the country.

“My daughter has a lot of fun learning”

GoGoKid was among the first to go out of business. Yet, one Chinese firm, VIPKid, which according to its website has over 70,000 American and Canadian teachers, is still in business. The company has U.S. investors, including the venture capital firm of the late Kobe Bryant, who was massively popular in China.

“Existing students can still take courses if they bought them before Aug. 9. So we paid for another 500 lessons,” she said.

That costs her nearly $12,000 — not far off from the average yearly salary in her tiny county.

“It is a desperate attempt for my child [to keep the lessons going],” Zhang said, adding that there are no native English-speaking teachers in her area. Plus, VIPKid makes learning English fun for a 5-year-old.

“Sometimes my daughter puts her foot to the screen, which isn’t polite, but the American teacher will either pinch her nose and make a noise, or say the foot smells good,” Zhang said. “My daughter has a lot of fun learning.”

The daughter’s American tutor is known to Zhang only as “Teacher Kristen.” Parents say they are given only first names to prevent private contact. However, Marketplace tracked down “Teacher Kristen,” who is a mom of three named Kristen Peele.

“[Zhang’s daughter] has made tremendous progress. I’ve seen her go from being shy to even sit there, especially without an adult nearby, to reading sentences on her own,” Peele said from her home in North Carolina, which is 12 hours behind China.

Income and workable hours for a single mom

“For me, my VIPKid income means that I can work while my children are sleeping, and then I can still be a mom for them during the day,” Peele said. “I can take them, [then] pick them up from school. I can be here if they’re sick. We can go do fun things in the summer. I’m available to be the mom that I want to be.”

Peele said VIPKid came into her life just as she was going through a divorce and had to enter the workforce after a long absence.

“To have something that I became good at and that I can connect with other people on and [get good] feedback … that was really meaningful to me,” Peele said.

She said she understands the Chinese policy aims to reduce stress on students.

“I [ask] students, ‘What did you do today?’ It’s a summer day. [They respond,] ‘I had a two-hour math class. I had a Chinese class. I had English class. Now, I’m doing an online English class and I have homework to do,” she said.

However, she wonders why the policy targets only foreign teachers based abroad.

“There’s a real desire for China to be more nationalistic and to have more of their own curriculum and to be more closed off from [foreign] influence,” said Tim Gascoigne, a VIPKid teacher and a business coach for online teaching.

Already, ESL teachers say the Chinese platforms tell them politics and religion are off-limits topics. Maps that do not show Taiwan as a part of China are also not allowed.

“Teachers broke the rules all the time. Teachers would put [Christian] scripture verses into their feedback” Gascoigne said.

For ESL teachers, there are feelings of anger and sadness at the loss of real connections. VIPKid teacher Nicole Eastman in Texas recalls one student who was eating dinner during their lesson and after finishing, he waved his mom to clear the plate.

Even working part-time, Eastman said, her and husband’s earnings from VIPKid are substantial for her family.

“Last month, between the two of us, it was an additional $1,000-plus. That’s a lot of money that pays for half of our rent,” Eastman said.

VIPKid teacher Tina Delgado in Utah is looking to teach on different ESL platforms for Mexico and Columbia. However, she said those firms pay far less than VIPKid. She would have to supplement her income with a couple of other businesses.

One of the Chinese students she said she would miss is an animated boy. He is in level two, which has songs that play at the beginning and end of the lesson.

“As soon as that song pops up, he pops up and he starts moving and doing other stuff,” Delgado said while imitating his motions. “He makes me so happy, and the thought of not seeing him or so many others saddens me.”

VIPKid said it remains confident in its future and is exploring overseas markets and other products, including teaching English to adults.

“Over the past year, we have been piloting several education programs outside of China. We are accelerating our efforts on these programs as we continue to execute on our mission to inspire and empower every child for the future,” a VIPKid spokesperson said in a statement to Marketplace. “We are committed to maintaining and growing the opportunities for [teachers] and all online educators.”

There is no telling how much longer VIPKid teachers have to teach young students in China. The platform only allows teachers to see their schedules one week in advance.

VIPKid teacher Theodore Anastopoulo does not like the uncertainty and is now focusing on his graduate studies. He has quit teaching, which he said is a shame. Anastopoulo said he learned a lot about Chinese culture from his students, like what parents and children expect from each other and the trust Chinese people place in their government.

“Anytime we can have reciprocal cultural exchange based off of language, it will do much to diminish the tensions between our two countries and to take this away. It leaves me questioning the commitment of the Chinese government [to] easing frosty relationships with the United States,” he said.

Meanwhile, some Chinese parents have reached out to their tutors for one-on-one lessons, which is still a gray area under the current policy.

Gascoigne warns that some Chinese parents have found ESL tutors but offered them half of what the platforms pay. He advises ESL tutors to charge their worth because going solo will be challenging.

“They have a lot of things to think about, [the] main one being, ‘What am I going to teach? And how am I going to get paid?’” Gascoigne said.

It is hard for average Chinese families to get money in and out of China because of capital controls. Plus, instead of Venmo, Facebook and TikTok, which are all blocked in China, Chinese parents use Alipay, WeChat and Douyin. It is a challenge simply to connect with former students, as teachers like Ross in Peru have found.

Parents and teachers searching for each other

“The sad reality is that there’s no way for me to spread the message within China that we’re there waiting for them to find us,” she said, adding that there are WeChat and Facebook groups of teachers and parents searching for each other. Ross is among the ones trying to help them reconnect while she also searches for her students.

“I’ve seen them lose their first tooth and they’ve cried to me. They’ll lean into the screen and tell me their mommy’s mad at them or that they got a bad grade in a math class,” she said.

If by chance Ross’ former students can hop over the great firewall and read this article, she has a message for them: Teacher Hillary is still looking for you.