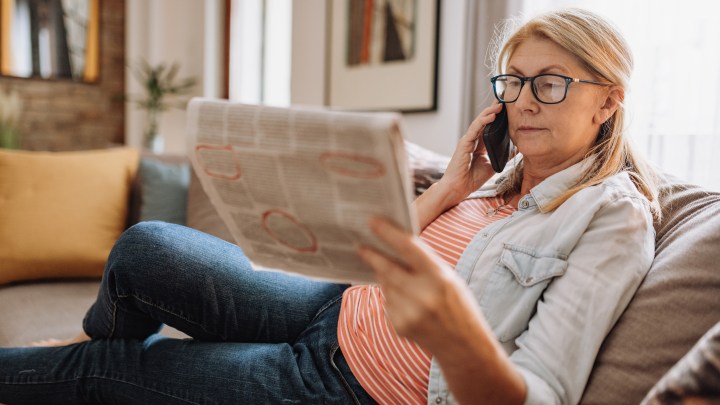 COPY
Among women age 40 to 65 who were surveyed for an AARP report, more than 40% had experienced a job interruption during the pandemic. Drazen_ via Getty Images
Workplace Culture

Among women age 40 to 65 who were surveyed for an AARP report, more than 40% had experienced a job interruption during the pandemic. Drazen_ via Getty Images
Listen Now

A new report from AARP highlights just how not normal the labor market is for women in midcareer and beyond right now.

The survey of women 40 to 65 found that more than 40% had experienced work interruption during the pandemic; for those who were still jobless in June, nearly 70% had been unemployed for six months or more.

“It’s pretty scary,” said Susan Weinstock, vice president of financial resilience at AARP. “There’s so many implications down the line for jobs, for savings, for retirement, for financial stability.”

In most recessions, older workers have a harder time finding a job and often end up with lower pay when they do, said Monique Morrissey at the Economic Policy Institute.

“This is not a typical recession,” she said.

Because of the pandemic, older workers may also have health concerns about returning to work. Plus, women particularly have been affected by disruptions of schooling and caregiving.

“People who are caring for young children, caring for their spouses and caring for parents,” Morrissey said.

Thirty percent of the women surveyed reported taking care of a child or grandchild. One in 10 were caring for both a child and an adult. The numbers were even higher for Black and Latinx women.

“Many women of color relied during the pandemic, even before, on familial care,” said C. Nicole Mason, who heads the Institute for Women’s Policy Research.

Older women of color disproportionately lost jobs during the pandemic and may face discrimination in the labor market even if they can return, she said.

“I think many people have the wrong perception that right now it’s easy to get a job,” said Ofer Sharone, a sociologist at the University of Massachusetts, Amherst.

So if you can’t, unlike during the height of the pandemic or even the Great Recession, it’s more likely to carry a stigma, he said.