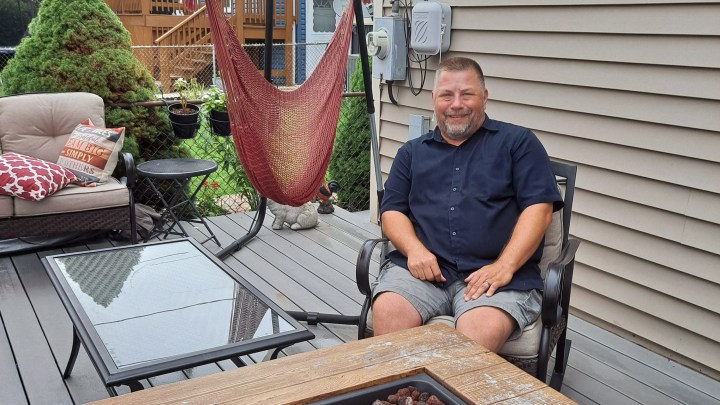 COPY
Brian Boyle in his backyard on Chicago’s Northwest Side. Natalie Moore/WBEZ

Brian Boyle in his backyard on Chicago’s Northwest Side. Natalie Moore/WBEZ
Listen Now

Brian Boyle loves the backyard of his home on Chicago’s Northwest Side bungalow belt. There’s a deck, tables, umbrellas and a swing set.

“This is our little paradise. We absolutely love it,” Boyle said. “We’re out here all the time.”

The money for his backyard oasis came from the Northwest Home Equity Assurance Program, or NHEAP, which encompasses several neighborhoods in its district. Residents pay a small tax of about $8 a year that shows up on their property tax bill. That money goes into a fund, and homeowners can enroll in the equity program to apply for a loan.

The city’s Northwest Side used to be made up of predominantly white neighborhoods.

So, more than 30 years ago, residents there created a controversial tax program to prevent white flight. But the money sat mostly unspent for years. Today, these communities are more racially diverse, and housing activists have demanded changes so the money can help homeowners improve their properties.

The idea for NHEAP started after Harold Washington, the city’s first Black mayor, was elected. Some white residents feared property values would plummet, prompting state lawmakers to pass a measure that allowed people in this district to set up a fund to claim money if their home value depreciated. That didn’t happen — and the fund swelled to more than $9 million.

Two years ago, new leadership came in after community pressure changed state law to allow the fund to make loans. Since then, about a dozen households have received loans for repairs, maintenance, remodeling or other improvements. There are zero-interest loans available for up to $10,000.

“Some other modifications I have seen: People have built out their basement, furnaces, people use it to get a furnace.” So, Ellis says, what people can do to improve their homes is not really limited.

These loans are obviously valuable to homeowners but also to others in the neighborhood as they keep houses in good repair. However, some housing activists are pushing for more to stabilize the neighborhood beyond aesthetics and home maintenance.

“What we saw during the pandemic and what we’re still seeing is that not only are folks at risk of eviction and foreclosure, but there’s also a real issue with people being able to pay their property taxes — particularly older adults, those that are disabled and people of color,” said James Rudyk of the Northwest Side Housing Center.

In response, state lawmakers passed a revision to the law over the summer. Homeowners will be able to use the program to get loans for delinquent property tax payments. It takes effect in January.