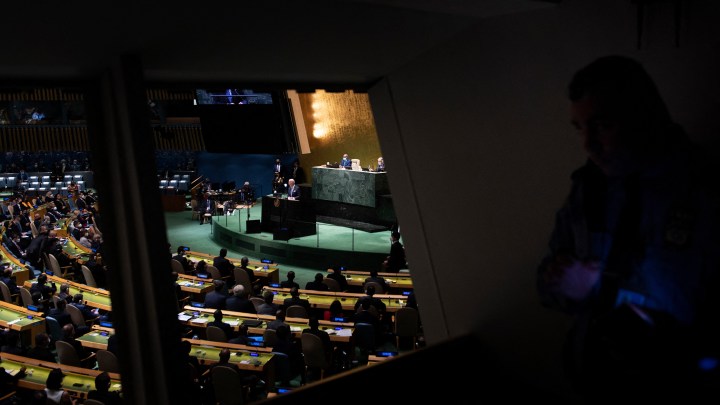 Back in 2009, the U.S. and other developed countries made a pledge: By 2020, they would come up with $100 billion a year, every year, to help developing countries mitigate and adapt to climate change.

The idea behind the pledge was that developed countries bear most of the responsibility for the climate crisis and have the most resources to adapt to it, while “developing countries have done the least to contribute to the global climate crisis, and they have the fewest resources to respond and adapt,” said Lauren Stuart, a climate change policy advisor at Oxfam.

Beyond which global warming becomes increasingly catastrophic. “For this to be a success we need developed countries to find that $100 billion,” British Prime Minister Boris Johnson said in a speech during the United Nations General Assembly this week. “Too many major economies — some represented here today, some absent — are lagging too far behind. And tinkering around the edges, simply denuding the tree of its lowest fruit, simply won’t achieve the change the planet needs.”

A lot of major changes need to happen if the world is going to significantly cut greenhouse gas emissions and adapt to a climate that’s already changing. All of it is expensive. In many countries, it won’t happen without significant amounts of climate financing.

“Some good examples of what climate finance actually looks like on the ground in developing countries might be providing financial resources to help a rural farmer adapt their crops to drought or supporting the development of renewable energy or halting deforestation,” said Oxfam’s Stuart.

Supporting the development of renewable energy is particularly critical if the world is going to have a chance of limiting global warming.

“The reason is, if you think about a country like India — India, of course, is not one of the poorest countries in the world, and yet India is a country that has 300 million people without reliable access to energy,” Wu said. “Currently, the cheapest way for India to provide that energy would be to burn coal. And what we need India to do instead is to transition to renewable forms of energy. It’s very difficult for them to do that on their own.”

That is where international climate financing needs to come in, Wu said. “To provide a country like India the means to make that transition to a cleaner economy without leaving massive numbers of people behind.”

In recent years, international funding from governments, private companies and multilateral development banks has helped finance major solar parks in India, Nigeria, Honduras, Morocco and a number of other countries.

Amar Bhattacharya at the Center for Sustainable Development at the Brookings Institution calls the solar park in Morocco “a very powerful example” of what climate financing can accomplish.

The largest concentrated solar power plant in the world, it was created in the last decade with hundreds of millions of dollars in international climate financing. Now, it provides clean energy to 2 million people in the country.

“So it’s a tremendous impact in terms of both a development outcome, but preventing, in some sense, that much emissions,” Bhattacharya said.

So far, he said, most climate financing has been going into renewable energy projects, which offer a potential return on investment and attract private companies. But developing countries also need money for adaptation and resilience — and for rebuilding after natural disasters, which climate change is making more frequent and more extreme around the world.

And the reality is, $100 billion a year is a drop in the bucket.

“It was not based on any type of assessment of the needs,” said Lorena González, senior associate for U.N. climate finance at the World Resources Institute. “The $100 billion goal has been generally accepted as only a small fraction of the total investments that are needed.”

The total annual amount of climate financing that developing countries actually need — for mitigation, adaptation and loss and damage — is likely in the trillions.

And so far, “we’re pretty far behind on reaching the $100 billion target,” said Erika Lennon, a senior attorney at the Center for International Environmental Law.

How far behind depends on whom you ask and what they’re counting. Even the most generous funding estimate, from the Organization for Economic Cooperation and Development in 2018, came in at just under $80 billion.

The need to increase that amount has been front and center at the U.N. General Assembly this week. In his speech Tuesday, President Joe Biden pledged to double the U.S. contribution to $11.4 billion by 2024.

“This will make the United States a leader in public climate finance,” Biden said. “And with our added support, together with increased private capital and other — from other donors, we’ll be able to meet the goal of mobilizing $100 billion to support climate action in developing nations.”

But Lennon said the $100 billion target is not ambitious enough, and the need to raise it is going to be a prominent issue at COP26, the U.N. Climate Change Conference planned for November in Glasgow, Scotland.

“If we don’t do something and do something urgently, the world is going to heat up even faster and become, in many places, uninhabitable,” she said.

And the costs are only going to rise — for everyone.