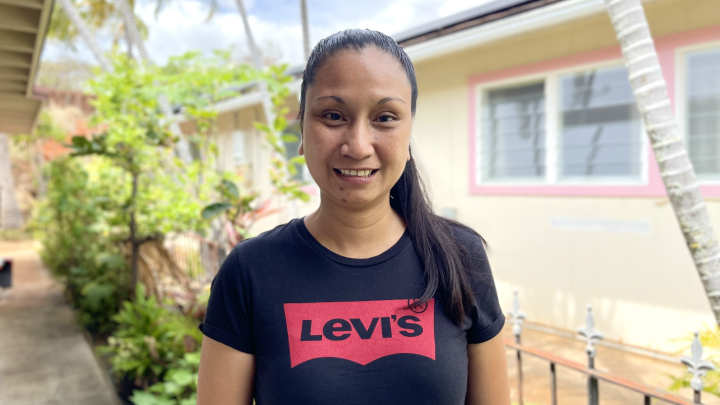 COPY
"I hope that the hotel will bring us back to work," says Mary Taboniar. "I'm hoping for a normal life again." Courtesy Mary Taboniar
My Economy

"I hope that the hotel will bring us back to work," says Mary Taboniar. "I'm hoping for a normal life again." Courtesy Mary Taboniar
Listen Now

Mary Taboniar has been working as a hotel housekeeper in the Waikiki district of Honolulu for three years. When the pandemic hit she was furloughed, and she’s now an on-call worker.

She wakes up early every morning because the call to come in to work could come between 5:30 and 10 a.m. “If they have no calls, then that’s it,” she said. “No work for you.”

Taboniar, a single mother of two, was depending on unemployment insurance throughout the pandemic, but the extra federal benefits expired this month. She already spent her savings and has been depending on local food banks to keep herself, her children and her mother fed.

“I was certainly ashamed of going,” Taboniar said. “Maybe somebody would know me or see me and say, ‘Hey, that’s Mary going to the food bank.'”

Now, Taboniar goes every week. “I have nobody else to rely on,” she said. “I’m grasping anything that I can to help myself and my family to survive during these times.”

Some hotels, like the majority of Hilton brands, have made daily housekeeping optional. Unite Here — a union representing workers in hotels, among other industries — estimates that ending daily room cleaning in the U.S. would eliminate as many as 180,000 jobs and particularly impact women of color.

“I hope that the hotel will bring us back to work,” she said. “I’m hoping for a normal life again.”

In the meantime, every day is “very stressful” for Taboniar as she tries to figure out how to pay her bills and rent without her usual job.