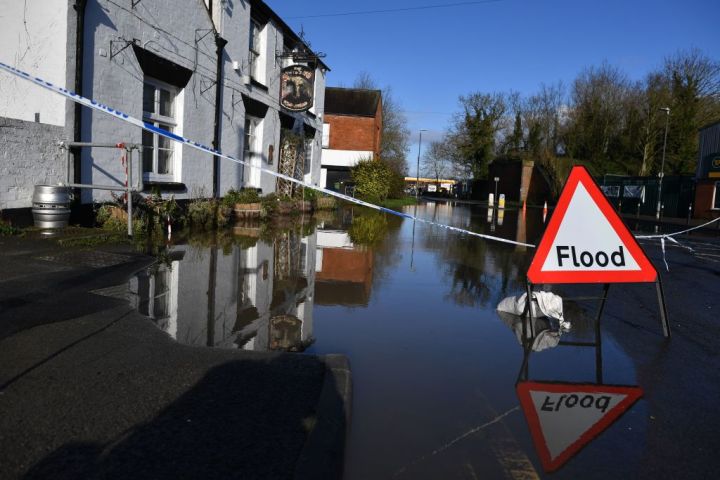 The British government says there couldn’t be a better venue for the Conference of the
Parties, or COP26, the United Nations’ climate change summit in the fall, than the United Kingdom. After all, Britain was the first major industrialized nation in the world to make a legally binding commitment to reduce its carbon emissions to net zero by 2050. And it has adopted numerous other decarbonizing targets, among them a ban on the sale of new fossil-fueled cars by 2030 and the phasing out of gas boilers over the next decade.

But what do British voters feel about these bold political commitments? How much support is there on the ground for the costly mitigation measures that could be on the way?

In the absence of any recent, large-scale opinion survey on the subject, Marketplace has been conducting its own research, visiting two locations that suffered heavy rainfall this summer that was widely attributed to climate change. We wanted to find out whether the people affected were now more prepared to accept the cost and inconvenience of the move to a low-carbon economy.

“We’ve had a flood on numerous occasions, but the last time [at the beginning of July] was the worst,” said Natasha Fuller, secretary of the Balham Boxing Club in south London.

“We were closed for a week, and a lot of equipment was ruined. We’ve lost running machines, chairs that we use when we do shows here, lockers, cross-trainers, weights. We’re nonprofit. We don’t get any outside financial help, so the flooding has been quite a blow, not just to the club, but to the local community. We’re not just a boxing club, we’re a community club,” she said.

If this climatic battering continues, says club founder Winston Fuller, this much-loved gym, which is run by volunteers and has been keeping young people off the streets and out of trouble for more than 30 years, may have to close as a casualty of climate change.

“Climate change is happening. It’s in front of us. It’s going on. We need to do something drastic to stop it,” Fuller said.

But while he agrees that morally Britain should reduce its carbon emissions, he’d most like to see the local government upgrade the drainage system around his gym.

“They need new drains that can take the water,” he said.

Adapting infrastructure is more important than mitigation, he said, since Britain’s carbon emissions are only 1% of the global total, and it won’t make much practical difference if Britain does cut them.

“If China, India, America doesn’t … we’re wasting time. So I think adaptation is more a priority than reducing emissions,“ he said.

“The drainage in the area of the gym is a major problem. And it’s gradually got worse as the climate’s got more erratic. All we require is a space that isn’t wet where young people can come in and train for an hour and a half six or seven days a week. For all that we talk about climate change, we require very little, other than dry space,” he said.

The city of Peterborough, a hundred miles north of London, also suffered severe flooding during the summer as the result of a torrential downpour.

“It started as a trickle of rain and turned into a monsoon,” city council leader Wayne Fitzgerald told Marketplace. “It was a once-in-50-year event. Up to 2 feet of water fell in three hours. You couldn’t move around the city or walk in it at all,” he said.

Peterborough was already taking climate change seriously long before the recent inundation. Like more than 200 local authorities across the U.K., the city had declared a climate emergency and, in Peterborough’s case, set a target to make the council’s activities net-zero carbon by end of this decade.

Charlotte Palmer, Peterborough’s head of service for environment, transport and highways, insists that the city is also in the process of adapting infrastructure but that mitigation should have equal emphasis because “we’re all human beings. We’re all citizens of this planet. We all have a role to play.” And she believes that the recent flooding reinforced that message:

“The extreme weather event in Peterborough gives us a really tangible example of how things are changing. And people can relate to it. They can think back and they remember that Friday night in Peterborough where, ‘Wow! That was a lot of rain over a very short period of time,’” she said.

But sampling a random selection of opinions of people passing through Cathedral Square in the center of Peterborough, we found that although practically everyone accepted that man-made climate change is a reality, there was some skepticism about aspects of the U.K.’s mitigation measures, especially the plan to electrify personal transport by 2030.

“We’re not yet in a position to produce enough electricity to charge the cars that we could sell,” said Anthony Monk.

“I think we’re way off having the logistical arrangements in place for people to feel comfortable with electric cars,” observed Susan Grey.

The electrification plan has big fiscal implications. If the U.K. government does succeed in weaning the Brits off petrol, it would lose billions in tax that it currently levies on that fuel. The likeliest replacement is road pricing, charging for every mile of road the driver travels. That would not be popular with local resident Philip Rowe, nor, he suggested, with many other British people.

“Paying pence per mile … it’s a huge cultural wrench for the Brits to start doing something like that,” he said.

To be fair, in this unscientific survey, some of the people we met in Peterborough were prepared for whatever “mitigation” the government threw at them. Will Counsell said he’d be happy to bear the cost of any mitigation measures.

“Certainly. It’s got to be done.” Counsell said.

To save the planet?

But far more common was this reaction from another member of the public in Cathedral Square, Tony Williams.

“I don’t think we should be sitting there worrying about our global footprint. It’s all the bigger countries — Europe, America, China — that really need to say, ‘That’s it, we’re cutting this, we’re cutting that,’” Williams said.

What about the U.K. leading by example?

The realization that Britain’s current, although not historical, emissions are relatively insignificant has a national resonance, according to James Frayne, founding partner of Public First, a public policy think tank, and it could come to the fore if the COP26 summit fails to secure new binding commitments from the biggest carbon emitters.

“If COP26 is seen to be a bit of a fiasco in terms of international agreements, there might be a sense in Britain of ‘What’s the point? What’s the point in me changing my home heating system or buying an electric car?’” Frayne said. “So it could, in the end, have quite serious ramifications.”

The summit could have a critical impact on British public opinion in another way, Frayne said. “The British people have been assured that the pathway to net zero is going to be entirely positive, is not going to lead to many significant life style changes,” he said. “This is going to be revealed as not the case at COP26. And I fear this is going to cause something of a backlash,” he said.

When the rubber meets the road, to use an automotive metaphor, when the full cost and scale of the mitigation measures becomes more apparent, the British people may push back.