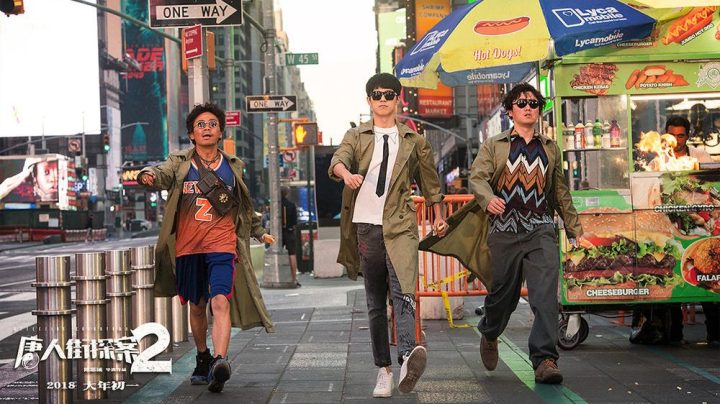 COPY
The Chinese blockbuster "Detective Chinatown 2" was filmed in New York. Movies made in China and other countries have become very competitive with Hollywood offerings in the Chinese market. Courtesy Mtime

The Chinese blockbuster "Detective Chinatown 2" was filmed in New York. Movies made in China and other countries have become very competitive with Hollywood offerings in the Chinese market. Courtesy Mtime
Listen Now

In the movie “Kill Bill: Volume 1,” the epic fight scene in which Uma Thurman’s character faces off with a dozen masked men inside a restaurant-nightclub called the House of Blue Leaves was shot in 2002 on a soundstage at the Beijing Film Studio.

Prior to “Kill Bill,” the last Western movie filmed in China was Steven Spielberg’s “Empire of the Sun” in 1987.

China had joined the World Trade Organization the previous year, in 2001, and was opening its economy to the outside world.

“It was a very special time in Beijing, and [Tarantino] fell in love with it,” Walsh recalled.

“Kill Bill” was not shown in Chinese theaters, but the collaboration opened China to Hollywood, according to Walsh. He returned a few years later to film the “Kite Runner.” Walsh said it was a “great time” for Hollywood-China collaborations in the 2000s.

Hollywood movies released in China easily topped the box office back then. But their success is no longer guaranteed.

“Free Guy,” released Friday in China and starring Ryan Reynolds, raked in close to $7 million worth of tickets at the end of the first day. It has a long way to go to catch up to the movie that has been in the top spot for the last month, the mainland China-Hong Kong offering “Raging Fire,” which grossed $37.6 million in its opening weekend. Meanwhile, the Disney-Pixar animated flick “Luca” earned a modest $8 million in its first week of release.

Hollywood films are ever more dependent on earnings in China. Over 80% of the country’s theaters, as of Friday, are still operational despite sporadic closures due to outbreaks of the delta coronavirus variant.

Former theater manager Harris Lu remembers one of the first American movies he saw on the big screen, the 2009 sci-fi film “Avatar.” Moviegoing was a considerable luxury in his county in eastern Jiangsu province.

China retains a quota on foreign films, which was raised to 34 in 2012 and hasn’t changed since.

Moviegoers in China are spoiled with choices from neighboring countries and domestic films that have increasingly better production and storylines that connect with Chinese audiences.

“When I was young, whenever an American movie screened, I would want to go watch it,” Lu said. “These days, I don’t have that kind of urge.”

The pivotal point for China’s film industry came in 2012, when the Chinese comedy “Lost in Thailand” — by Beijing Enlight Pictures — became the first domestic film to sail past the 1 billion yuan mark, equivalent to $160 million at the time.

“The movie made a lot of money. More importantly, Enlight’s stock went through the roof,” said Chris Bremble, CEO of visual effects and animation firm Base Media. “China’s markets are more retail driven. So, if you had a hit movie, investors started buying stock.”

Suddenly, film was a hot investment, and Bremble’s firm in Beijing, which has worked on the “Star Wars” and “Transformers” franchises, had Chinese companies knocking on its door.

“I remember sitting here in my office with a group of rare-earth miners, and they were like, ‘We have all this money. We’d like to invest it in movies,’” Bremble said. “It was kind of the Wild West or Wild East.”

Chinese money also poured into Hollywood. The Chinese conglomerate Dalian Wanda Group bought AMC Entertainment for over $2 billion. China’s Perfect World Pictures invested over $500 million in a slate of films at Universal. China’s TIK Films’ deal with Lionsgate was worth more than $300 million.

But not everyone was having a good time.

The U.S. partners were equally baffled, according to Bremble. Hollywood studios may have thought Chinese firms were interested in being film partners, he said, when in fact the Chinese executives were more interested in how that film investment would drive up their share prices. There were payment issues too, which is commonplace in other sectors in China.

“I was at a premiere of a movie and talking to the Hollywood executive, and the Chinese company executive came over and Hollywood guy says, ‘Are you going to pay us yet? Like, the movie is done.’ And there was a big argument,” Bremble said.

By 2018, studio deals had dried up. It was due to a combination of China’s government curtailing investment overseas, a tax scandal and the start of the U.S.-China trade war.

“China investment into Hollywood came basically to a grinding halt to where we are now, which is minimal,” said American producer and distributor David Lee of Leeding Media, who owns the China rights for “Million Dollar Baby” and “Whiplash.”

Add in the effects of the pandemic, and there is currently a backlog of Hollywood films waiting to be released in Chinese theaters.

“A film typically takes anywhere from one to three months to secure the necessary approvals,” Lee said. “With the trade war, the censorship and review process for non-Chinese films is now three to six months.”

The unpredictable nature of China’s film censorship and approval process makes it difficult for Hollywood film distributors to market or even raise awareness about their movies.

“Hellboy” was released in Chinese theaters in November 2020, more than a year and a half after its U.S. release, opening the door for pirated copies on the internet.

Out of the current top 20 movies in China, only four are American.

Hollywood studios have longstanding gripes about China’s film quotas and the fact that their cut of revenue sharing at the Chinese box office is only 25% — which is low compared to other markets.

One way to bypass the restrictions is to organize a co-production in which at least one-third of the financing and principal cast are Chinese.

The 2016 fantasy adventure “Great Wall” had many of the ingredients for success — it starred Matt Damon and was directed by China’s top man, Zhang Yimou — but the movie was a flop. It received a Rotten Tomatoes score of 35% and didn’t get much higher on the Chinese site Douban.

“When we did ‘The Great Wall,’ we tried to blend the [Eastern and Western] perspectives, and it wasn’t as successful it could be,” said Walsh, who was the movie’s executive producer. “If you look at it again, it’s definitely not a bad movie.”

While filming, Damon said, he knew the movie was a “disaster.” He recalled asking Zhang, the director, about a scene he didn’t understand, and they spoke through an interpreter named Frank.

“Frank says, ‘Yes! The director agrees with you but says since this is a Hollywood movie … and I was like ‘Oh God, no! No!“ Damon told Marc Maron on the “WTF” podcast last month. Essentially, the director was making a “Hollywood film” rather than sticking to his vision, Damon said.

Zhang echoed the sentiment in the local Chinese press, initially saying he didn’t want to do the movie because the script was a Hollywood “stereotype” and represented China inaccurately.

“But my agent asked me to picture a Chinese movie being screened in 150 countries at the same time. He said if I didn’t take this opportunity, I might never have one again,” Zhang said in a rare interview in 2018. He added that he did not like Hollywood’s producer-led moviemaking system.

There is a difference between the filmmaking cultures of the U.S. and China. Producer Yue hopes to bridge the differences, he said, by understanding fundamentals such as how crews are paid and how they prepare. For instance, movie crews in the U.S. are paid hourly, so there is a lot of preparation done prior to filming.

“During the preparation, there is a lot of meetings going on. Everybody knows exactly what the director wants. Everybody knows exactly what they need to do on set. That’s a good tradition,” he said. In contrast, Chinese crews are paid flat fees, and Yue said there is not much preparation ahead of filming. “We improvise a lot in the Chinese system.”

He opened a Los Angeles-based office called Bamboo Curtain this year to facilitate more co-productions. Another co-production, called “The Meg,” a shark film, did well at the U.S. and Chinese box offices in 2018. There are doubts that its success could be replicated.

“I think it’s hard to serve both masters,” Bremble said. His visual effects company has gone from solely serving Hollywood to now primarily serving the mainland Chinese film market. “Everything we do must be focused on the mainland market, but as we do that, we want to make sure that it can be palatable to the rest of the world.”

Producer Yue believes that, instead of making one movie for two markets, one script should be made into two films. “We’re going to write a great script that we know is going to work in China. If the film becomes successful, I would take part of the profits and send it back to the U.S. and then produce it again the American way.”

Hollywood and China still want to work together. They’re just not sure how to restart the romance.