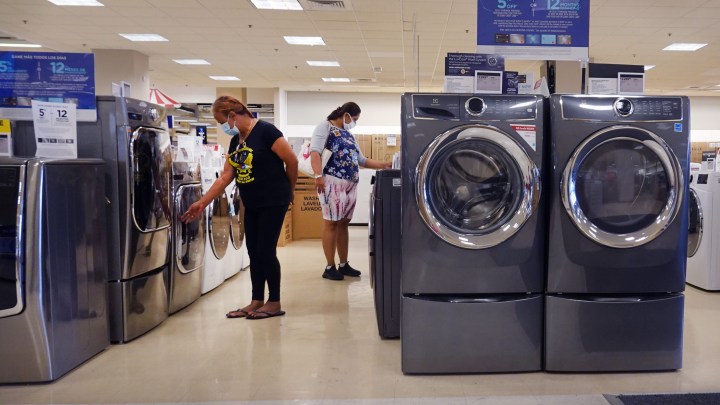 COPY
Orders for durable goods, including large appliances, dipped 0.1% in July, largely because of weakness in transportation equipment. Scott Olson via Getty Images

One aspect of this economy that has stayed pretty strong through most of the pandemic is durable goods orders. That means stuff U.S. manufacturers produce that’s designed to last. Think cars and trucks, machine tools, fridges and air conditioners — things like that.

​But on Wednesday, we learned that durable goods orders were down .1% for July. That’s after a 0.8% increase in June and a 3.2% increase in May. So, is this a sign of a slowdown?

This is a case where you can ignore the headline number.

“We actually thought that it was a strong report,” said Jay Hatfield, a portfolio manager at Infrastructure Capital Advisors. “Durable goods, you have to be a little bit cautious interpreting because you really need to look at it ex-transportation.”

That means not including orders for new transportation equipment — mostly aircraft, which have huge price tags. They were down almost 50% in July. But core durable goods orders were up 0.7%, about the same as the month before.

Consumers are helping drive this continued strength, according to Andrew Hunter at Capital Economics.

We’ve had money in the bank from relief checks, and until recently we couldn’t spend much of it on services, like going out to eat. So instead, we’ve spent it on things. “That’s fed through to strong demand for U.S. manufacturers,” Hunter said.

That, in turn, spurs manufacturers to invest — in new assembly lines and trucks and robots — to pump up production. The Federal Reserve’s rock-bottom interest rates help, Hunter said.

“Borrowing costs for most firms are pretty much at or close to record lows,” he said.

Though airplane orders may have messed with the data for July, they shouldn’t be ignored altogether.

Colin Scarola, who follows the industry at CFRA, said that recently, airlines started warning that people were pulling back on travel plans, due to “uncertainty around the delta COVID variant. When airlines get nervous about their growth plans, they pump the brakes on ordering new planes,” he said.

If airplane orders stay depressed, that could signal the recovery in air travel and aircraft production is faltering.