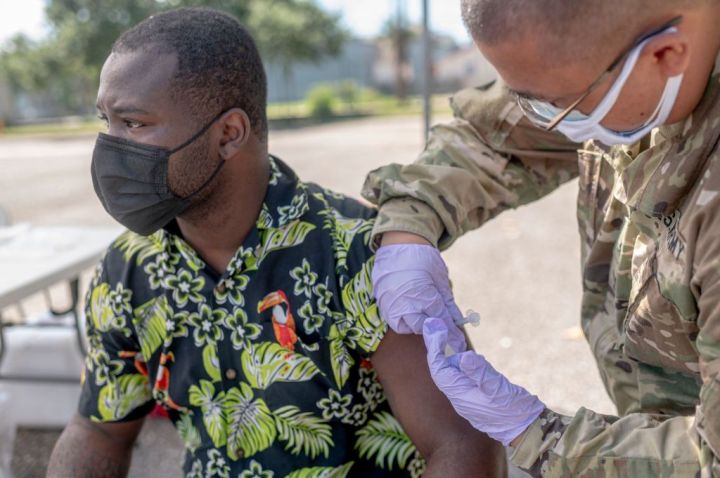 COPY
A man gets vaccinated, per request of his employer, in New Orleans, Louisiana, on Aug. 14, 2021 as parts of the country reinstate indoor mask mandate amid COVID-19 surge. EMILY KASK/AFP via Getty Images

A man gets vaccinated, per request of his employer, in New Orleans, Louisiana, on Aug. 14, 2021 as parts of the country reinstate indoor mask mandate amid COVID-19 surge. EMILY KASK/AFP via Getty Images
Listen Now

Ready for your booster? The Biden administration said Wednesday it will offer booster shots to people who received the Pfizer or Moderna vaccines, pending FDA approval. The boosters are recommended eight months after the second dose, and will be available starting Sept. 20. Employers could play a critical role in the booster rollout.

Earlier this year, Dodger Stadium’s parking lot in Los Angeles was a mass vaccination site. But come September, that lot will be occupied by Los Angeles Dodger fans.

Caplan doesn’t expect too much pushback from employees over privacy concerns.

“America may be the only place on Earth where people say, I’d rather my boss took care of my vaccination than my public health department,” he said.

What about paid time-off for boosters? Vicki Shabo is with the New America Foundation, a think tank. She said while white collar workers are more likely to get it, “often left behind are service workers and grocery workers and food service workers.”

The very people still on the front line of the pandemic.