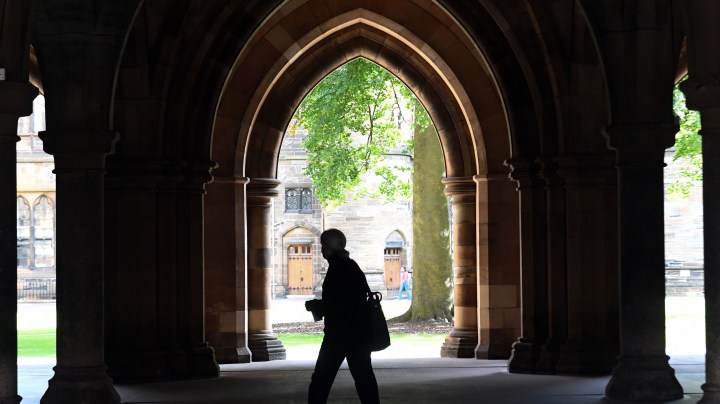 COPY
EU applicants to U.K. schools have dropped dramatically following Brexit and a steep rise in tuition fees. Above, a student walks on the University of Glasgow campus in Scotland in September 2020. Andy Buchanan/AFP via Getty Images

EU applicants to U.K. schools have dropped dramatically following Brexit and a steep rise in tuition fees. Above, a student walks on the University of Glasgow campus in Scotland in September 2020. Andy Buchanan/AFP via Getty Images
Listen Now

Brexit continues to send tremors through the British economy. The latest sector to be affected: universities. The number of applicants from the European Union to attend United Kingdom schools has dropped dramatically, down 43% this year.

Since British higher education is heavily dependent on fees from overseas students, this looks like a disaster. But it could, in reality, turn out to be financially beneficial for the U.K.

To understand why, we need to explore the precise reason for the fall in EU student applicants to the U.K.

“I think it’s the inevitable consequence of the change in EU student status following the U.K.’s departure from the European Union,” said Vivienne Stern of lobby group Universities UK.

After Brexit, most EU students are treated as foreigners in the U.K. and, therefore, they are no longer entitled to the same financial benefits as their British counterparts.

Their tuition is no longer capped — as it is for the Brits — at the equivalent of $12,700 a year. They’re required to pay the same as foreign students, an average of more than $21,000. For the most select universities, it can be double that sum. The decline in EU interest is understandable, Stern said.

“Really the demand is being suppressed by the feeling that the U.K. is more unaffordable than it was,“ she said.

But is the sharp drop in EU applicants a severe hit to British universities?

“This is probably going to sound surprising: It is not a financial blow at all,” insisted Nick Hillman of the Higher Education Policy Institute. Even though EU applications are 43% down overall, there are still 28,400 EU students who have applied to come to the U.K. this year.

“Because they’re going to be paying those much higher fees, the actual amount of money the universities are getting may very well not fall at all. They could get just as much money to educate fewer students,” Hillman said.

Fewer applicants from the EU will also make more room for lucrative foreign students from other parts of the world, and applications from them are up 14% this year, according to Stern.

But there is one nagging worry: As the number of European students in the U.K. declines, is the largest group of foreigners studying in the U.K., the Chinese, becoming too dominant? They already have a major presence on British campuses.

“The Chinese are not only the largest foreign group, they make up the third-largest market after England and Scotland,“ Brian Pepin of UCAS, the university admissions service, pointed out. “They’re even larger than some of the domestic markets. For example, there are more applicants from China to U.K. universities than there are Welsh or Northern Irish applicants,” he said.

Relations between the U.K. and China have become increasingly fraught over such issues as the crackdown in Hong Kong and the treatment of the Uyghur Muslims. Are British universities becoming dangerously dependent on a country whose government might try to apply political pressure on the U.K. by threatening to withdraw its students?