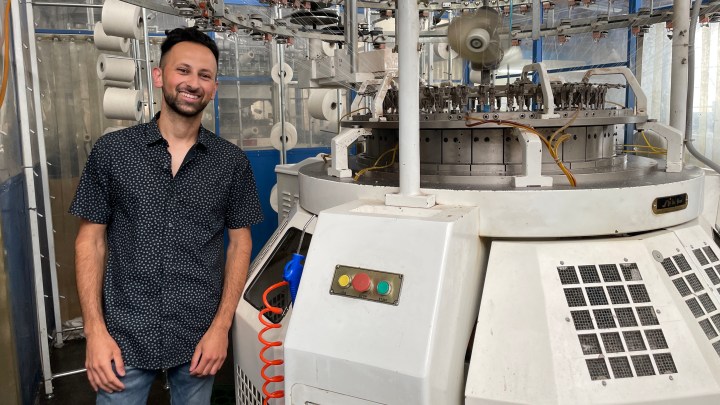 COPY
Sean Zahedi stands next to one of his knitting machines at Lafayette Textiles in Vernon, California. Benjamin Gottlieb

Sean Zahedi stands next to one of his knitting machines at Lafayette Textiles in Vernon, California. Benjamin Gottlieb
Listen Now

Sean Zahedi grew up in his father’s textile factory in Vernon, California, playing in the rows of finished fabric.

He remembers when Lafayette Textiles had some 200 employees spinning yarn, monitoring knitting machines and washing clothing. When he came back to work for his father about four years ago, he found a smaller operation on the verge of shutting down.

“My father used to have his own dye house,” Zahedi said. “But because of rising labor costs, environmental regulations and water, it moved to Nicaragua.”

Manufacturing jobs in California have migrated overseas for years. But now many industries face a new challenge: They depend on access to cheap, plentiful water, and California’s future looks increasingly dry.

Nearly 85% of California is experiencing either extreme or exceptional drought conditions, the highest level on the U.S. Drought Monitor scale.

“We are no strangers to drought [and] the situation with water, especially being here in California,” Zahedi said. “It is so water-intensive and it does translate into a higher cost of manufacturing.”

Those higher water costs, especially during the last California drought, prompted some factories in Los Angeles to move across the border, said Ilse Metchek, president of the California Fashion Association. In 1990, the U.S. fashion industry employed roughly 900,000 people; now, it’s down to around fewer than 100,000 fabric sewers and cutters.

She said while LA remains a talent hub for fashion, many of the manufacturing jobs are leaving.

“The industry [has] totally changed,” she said. “If we don’t have water here, and we want to make jeans, garments, dyed t-shirts, tops, jackets, we have to make it somewhere.”

Metchek said that during the most recent state drought, businesses like dye houses were forced to turn off their water for a period of time each day. Cheap labor in other countries and recent revisions to free trade agreements contributed to this decline, Metchek said. But so did Californa’s water-saving measures during the last drought.

Back in 2015, former Governor Jerry Brown implemented the first, mandatory water cutbacks in state history, a 25% reduction for 400 of California’s water districts. Many dye houses in LA, Metchek said, moved away.

“If you’re in a dye house, the water has to run all the time. That is not a problem in Mexico,” Metcheck said, where water conservation rules are rarely enforced.

Some textile companies are already planning for a future with less water, like the denim company Saitex, which just opened a new facility in LA. Its founder, Sanjeev Bahl, said he’s invested in green tech washing machines that recycle water.

“It’s not going outside into another plant and getting treated and being either disposed of or recirculated. It doesn’t work like that,” he said.

It’s as much a business decision as a moral one, Bahl said. After all, the World Bank reports about 20% of the world’s wastewater comes from fabric dyeing and treatment. Upfront costs for this equipment, Bahl said, are high.

“This $2 million or $3 million, whatever we put into it … we broke even in seven years,” Bahl said.

Even so, Bahl said, that investment will pay off in a drier future.