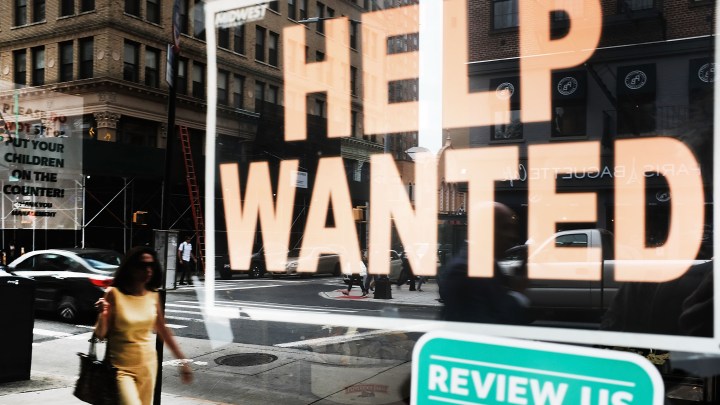 COPY
Hiring results have been mixed in states where federal unemployment benefits have ended. Spencer Platt via Getty Images

Hiring results have been mixed in states where federal unemployment benefits have ended. Spencer Platt via Getty Images
Listen Now

It’s been a strange spring and summer for the hospitality industry.

“I can’t tell you how many beds our executive team has stripped and made,” said Lisa Lombardo, chief people and culture officer at HDG Hotels, which operates 20 properties in Florida.

As people started traveling more, bookings returned to normal, but staffing did not. The company looked into job fairs and created an employee referral program. It didn’t raise wages or offer hiring bonuses. But ultimately, it didn’t need to.

“It was as if someone had turned on a water faucet,” Lombardo said about hiring after Florida dropped the extra $300 a week in federal unemployment benefits in June. “From June 23 to right now, you’re looking at more applications probably than we have ever seen.”

People are even job hunting the old-fashioned way — walking in the door and asking to apply. A couple of months ago, Lombardo was looking for nearly 100 employees. Now, the hotels are staffed up. And she thinks it has to do with those extra benefits ending.

Twenty-six states had originally moved to end the extra $300 a week in federal unemployment benefits before they officially expire in September, though some of that’s become cloudy as judges in some states decide whether to temporarily reinstate benefits.

The argument for ending the extra income has been that the extra money was keeping unemployed workers from looking for jobs when there is a labor shortage.

But there isn’t a lot of data out there yet to give us a definitive answer. Because of the way monthly unemployment numbers are tracked, we won’t see what’s happening now until August or September. We could look at job search activity. It’s up in some states that have ended the extra benefits, but down in others, according to Indeed, a Marketplace underwriter.

There are also unemployment insurance claims. But even those numbers are murky.

In the week ending on July 3, claims actually fell by a higher percent in states maintaining the extra benefits than they did in states that ended them, according to Andrew Stettner at the Century Foundation, which means “there’s some other factors at play,” he said.

One is that finding child care is still a struggle for many parents, especially if the difference between a parent’s paycheck and the cost of child care is slim. This brings us to another point: Job openings right now are concentrated in low-wage, hourly work.

“It’s a natural trend that the jobs that come available early in a recovery tend to come first at the low end,” Stettner said. “And that’s not the right job for everybody.”

The “right job” is on many people’s minds as the U.S. reenters the world from lockdowns and remote work prompted by the deadly pandemic. And for many, a post-lockdown life means a departure from their pre-pandemic careers.

“I think that people have thought long and hard about coming back to an industry that is, um, challenging at best,” said Liz Valenti, who runs Wheat Penny Oven and Bar in Dayton, Ohio. The state opted out of the extra federal benefits in June, though a lawsuit has been filed to try to restore them.

Many of Valenti’s loyal employees haven’t come back, even after she raised wages by $2 an hour. They were concerned about COVID-19, the tough hours and how a bigger takeout business could mean making less in tips.

Then in June, her hiring outlook improved. She had many more applicants. But a lot of people didn’t show up to scheduled interviews, even working interviews that were paid.

“We would almost have a pool to see who was really going to show up for their tryouts,” Valenti said, who thinks some were just applying to fulfill a reinstated job search requirement to keep receiving benefits. “It was really, it was kind of dark humor a little bit there for a while in June.”

Since then, the extra unemployment benefits have ended and she gets fewer no-shows and more applicants with restaurant experience. But not enough.

Valenti’s business is still understaffed. She’s had to close two days a week as a result, and the kitchen crew is so slim that on most Friday evenings, she has to turn off DoorDash and Uber Eats and shut down takeout altogether.

“And so we are leaving tens of thousands of dollars on the table over the course of a couple of months,” she said.

The labor shortage won’t last forever, proven by research from the Great Recession when Americans were able to collect unemployment for up to 99 weeks.

“When extended benefits come to an end, people do indeed search harder for work and they’re more likely to actually accept a job offer,” said Gary Burtless, a labor economist at the Brookings Institution.

But, of course, he said this economic downturn is different. The jobs recovery will depend on a lot of variables: the virus, vaccines and variants.

“It’s going to be years before our research is going to sort through the evidence and tell us really what were the effects of this roller coaster of benefits,” Burtless said.