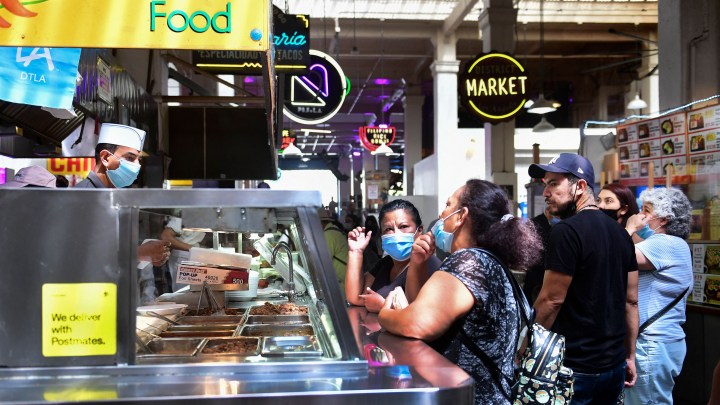 When Humberto Lopez, manager of Sunny Latino Market in South LA, heard about the new mandate, he got to work and ordered a new laminated sign.

Lopez already has a homemade sign that says that, but after more than a year, it’s pretty sun bleached. He also wants something that will get customer’s attention, because sometimes they don’t get the message.

“Sometimes they want to fight,” he said. Lopez was hit in the face during a mask-related argument and, with the new mandate, is bracing for those sorts of altercations again. At the same time, Lopez has tried to convince customers to get vaccines.

Down the street from Lopez’s market is a discount store that sells work boots, charcoal and cigarettes. A shopper there named Crystal Thomas is all for the mask mandate. She said she never stopped wearing hers.

“I’ve been to parties and they look at me crazy,” she said. “You do feel kind of outcast.”

Thomas isn’t vaccinated. And the new mask mandate makes the vaccine campaign confusing to her, “because you’re getting the shots and you’re still telling people they have to wear the mask,” she said.

But Thomas said that with the delta variant, it might be worth doing another lockdown.

Not far away is New 99 Market, which Alejandra Loza became the owner of in March. She plans to enforce the order for professional and personal reasons.

“I’ve lost my mother due to COVID complications,” Loza said. Her mom died shortly after Loza opened the store. Loza is vaccinated now, but she’s still being careful. “Just try to take it a little bit serious, you know? It’s your health,” she said.

Even though policing customers again is extra work, Loza said it’s worth it to keep her family safe.