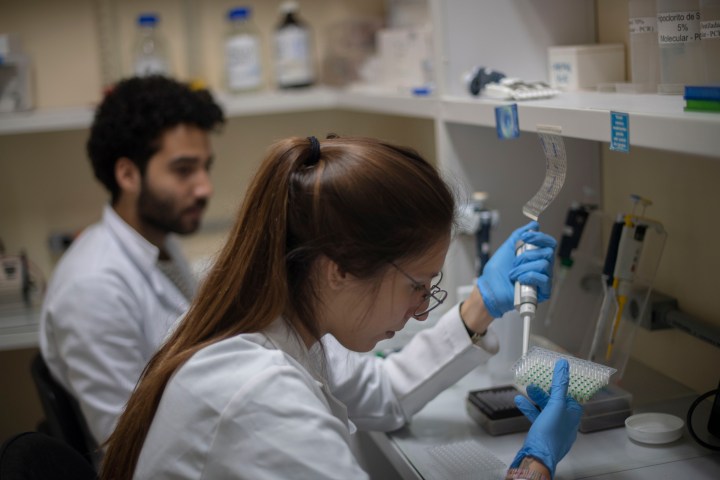 Government-funded research and development, as a share of U.S. GDP, has been falling for decades. Congress, fearful that the U.S. may lose its technological edge, is debating measures to increase the amount of funding that goes into R&D, like doubling the National Science Foundation’s budget, or encouraging more semiconductor production in the U.S.

Policymakers should start with immigration reform, according to Caleb Watney, director of innovation policy at the Progressive Policy Institute.

“We have a very large and promising crop of international scientists that are coming to the U.S. every year, but due to our immigration laws we can only keep some small fraction of them,” said Watney, whose article on the topic with co-author Divyansh Kaushik features in the peer-reviewed journal Issues in Science and Technology.

“We should be making it as easy as possible for these highly trained, highly skilled immigrants to be able to stay in the United States, start new businesses, create new jobs, and help push forward the scientific frontier,” Watney told Marketplace’s Sabri Ben-Achour.

Sabri Ben-Achour: The U.S. is concerned about losing its technological edge, especially to China, which has thrown incredible effort and resources behind its own research and development. What does U.S. immigration policy have to do with this?

Caleb Watney: While, today, immigrants make up around 18% of the US workforce, they’ve won 39% of the country’s Nobel prizes in science. They make up over 40% of our STEM PhD graduates. They make up 28% of our science and engineering faculty. They produce 28% of the nation’s high quality patents. And they found more than 50% of the billion dollar startup companies in the United States. And so we have a very large and promising crop of international scientists that are coming to the U.S. every year, but due to our immigration laws we can only keep some small fraction of them. We end up training them and then forcing a lot of them to go back home overseas. We should be making it as easy as possible for these highly trained, highly skilled immigrants to be able to stay in the United States, start new businesses, create new jobs and help push forward the scientific frontier.

Ben-Achour: I’ve spoken to immigrants who’ve gone to school in the U.S. who’ve graduated, who found a job willing to sponsor them, but because there are so few slots available, they don’t actually get to keep that job. What do you do about that?

Watney: Right now, for international graduate students, especially in the United States, there’s not that many options. Probably the major one that a lot of people are looking at is the H1-B visa, but there’s a number of problems with that. First of all, the H-1B is tied to a very specific employer, and so oftentimes that leads immigrants to not have a lot of bargaining power, either over their working conditions or over their wages, and sometimes they’re not being put to the best use. It also means that they can’t start their own business if they would want, because you’d have to structurally be fireable as an employee. The other major problem with the H-1B is that it’s a lottery system — so you can meet all the requirements; you can have a six figure salary offer from cutting edge AI research firm in the United States, and, just by pure luck, you can have your name not drawn out of the hat. And a lot of immigrants are actually deterred from wanting to stay in U.S. in the first place because there’s not that certainty of being able to stay in United States.

And I think there’s a number of ways that we could [create certainty]. Maybe the easiest would be just making our H-1B visa process easier; expanding the slots; making it easier for startups to compete. But all of that leads to temporary visas. And to really make them feel at home in the long-term, you have to increase the number of green cards. There was actually a pretty promising proposal in the Biden immigration bill that would exempt any STEM PhD students who are graduating from U.S. universities from the green card cap — which would basically mean, as soon as they graduate with their STEM PhD, they would have an easy way to apply, then potentially stay in the United States if they meet all the requirements, and there wouldn’t be a strict numerical cap on the number of them that would be able to stay. So that is, in many ways the easiest, and the best possible thing we could do to make it easier for them to stay. As maybe a secondary path, we should be making it easier for many of them to be able to launch their own startups, if they want to, in the United States. Unless you’re independently wealthy, there’s really not a statutory startup visa in the United States. And this is unlike many of our peer countries. Australia, the United Kingdom and Canada all have their own versions of a startup visa, but the United States does not. And so that’s another thing that we could do through Congress: create a statutory visa program that would allow startup founders to be able to come the United States and create new jobs.

Ben-Achour: Does bringing in or retaining more researchers from abroad in any way undercut the ability of U.S.-based researchers to flourish? Does it undercut wages for postdocs or in some way diminish opportunity for U.S.-based scientists?

Watney: Absolutely not. This really isn’t a question of where should the funding go. Oftentimes, in the case of international immigrants, we just need to give them legal status. And giving them legal status in no way diminishes the number of STEM fellowships that we can be giving to native born Americans. So we can and should be doing both. And actually, in many ways, these international students are oftentimes paying higher tuition rates, which actually means, in some ways, we can cross-subsidize; we can offer more scholarships by allowing more of these international students to come and study in the United States.

Ben-Achour: The Biden administration did re-establish a rule allowing for special visas for entrepreneurs. What more should it do?

Watney: Yeah, this was a very welcome move. We wrote a paper about this in in January suggesting that they should bring back this rule. It’s called the International Entrepreneur Rule. And it is a parole rule, so, similar to DACA, it’s established through executive authority. It creates a two-and-a-half-year window under which, if you can show that you’ve gotten $250,000 in investment from a qualified U.S. investor, you have a two-and-a-half-year period to try to build a business here in the U.S. And so this is, I think, a really great step forward. This was originally created right at the tail end of the Obama administration, but then the Trump administration came in and effectively froze the program immediately. And there was something like 10 applications before the program got frozen. But the Biden administration recently announced that they’re bringing it back, and that is a great first step. But, because it is an executive program, it means that any future administration could come and freeze the program like the Trump administration did. And that creates a huge shadow of uncertainty over the program. It means that immigrant students who might be thinking about going through the program really don’t know: is the program still going to exist in two, three years when I’m ready to graduate? Investors that are contemplating making $100,000 or multimillion-dollar investments in companies are going to be uncertain if the program is still going to exist a couple years in the future. So, while it’s a great first step, we really need the program to be solidified in legislation.

Ben-Achour: If the U.S. continues to shut the door to the scientists who train here, what are the consequences of that in the long term?

Watney: It would really be closing the door on how we originally came to be this big, successful leader in science and technology in the first place. But it’s also that we’re facing renewed international competition over this population. It’s probably good for the world but, unfortunately, bad for America that a lot of other countries are wising up and becoming much more active and proactive in their attempts to recruit international scientists themselves. So you saw this with the United Kingdom — at the beginning of last year [they] launched this new program called the Global Talent visa, and it’s very specifically trying to make it much easier and attractive for international scientists to come and stay in the United Kingdom. As I mentioned, both Australia and Canada have been very actively trying to recruit engineers and startup founders. Canada, for years, has been putting up billboards in Silicon Valley saying, “Hey, are you having trouble hiring your skilled international engineers? Come launch in Canada. We are going to make it really easy for you to do all that you want there.”