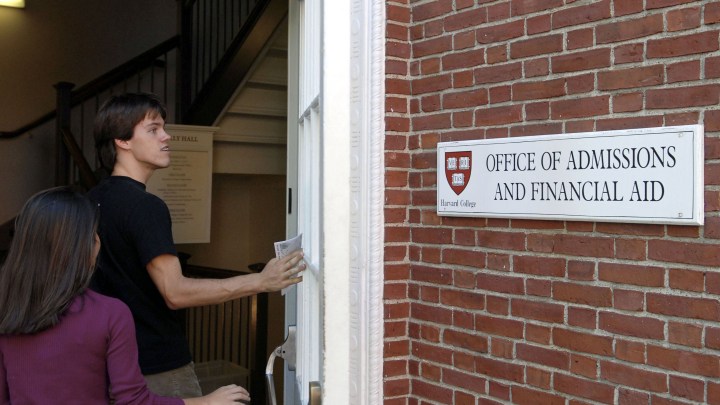 COPY
"College is not the engine of upward mobility we assume it to be," says Harvard professor Michael Sandel. He says a lottery for admissions would change that. Glen Cooper/Getty Images

"College is not the engine of upward mobility we assume it to be," says Harvard professor Michael Sandel. He says a lottery for admissions would change that. Glen Cooper/Getty Images
Listen Now

Over the years, Michael Sandel, a political philosophy professor at Harvard University, noticed a shift in his students. He observed that increasingly his students believed their admission into college was based primarily on years of hard work. This view, however, disregards the roles that outside assistance, luck, privilege and affluence play in college pursuits.

To help shed light on these forces, Sandel has proposed an admissions lottery system, highlighted in his book “The Tyranny of Merit: What’s Become of the Common Good?” The process would work just like it sounds: Create a pool of qualified applicants that have hit a certain mark, then randomly distribute them until spots at schools are filled. That’s the basic process, although there are variations of the admissions lottery system Sandel has put forth.

“Marketplace Morning Report” host Andy Uhler spoke with Sandel about the details of his proposal and what he hopes it will achieve. Below is an edited transcript of their conversation.

Andy Uhler: So you talk about this idea that higher education can help Americans generate upward mobility, and this has been the promise for decades. There’s a wonderful quote in your book: “American higher education is like an elevator in a building that most people enter on the top floor.” Explain to us what you mean by that.

Michael Sandel: College is not the engine of upward mobility we assume it to be. Raj Chetty and a team of economists did a study of 1,800 colleges and universities in America, public and private, selective and non-selective. And they asked, how many students at these places arrive poor, from the bottom 20%, and rise to affluence, top 20%, as an adult? It’s 2%. So it’s a mistake for us to think that if we’re worried about inequality and if we’re worried about mobility, the answer is higher education. It’s only an answer for a tiny fraction of our students. We need to pursue other responses to inequality because telling people go get a college degree, that’s not a good enough solution.

But it turns out, inspiring though this seems, it isn’t really true. It doesn’t match the facts on the ground. And there’s an insult implicit in that message, which is this: If you aren’t flourishing in the new economy and if you didn’t go to college, the implication is your failure is your fault. So I think we need a broader response to inequality than simply telling people, “All will be well, if only you get a college degree.”

Playing the numbers on college admission

Uhler: You had talked about sort of rethinking the way that we admit people into college, especially great colleges. The proposition is a lottery system. Explain to folks exactly how a lottery system would work.

Sandel: I noticed that among my students over the years, there’s a greater and greater tendency of students to believe that they worked hard, all through high school and before, they were under enormous pressure and so their admission is something they deserve. It’s the result of their effort and hard work. But we know, we know that this forgets a lot of help and luck that enabled these young people to achieve.

And so the lottery proposal is this: At these universities, the ones who get far more applicants than they can accept — I mean, Harvard and Stanford get something like 50,000 applicants for 2,000 places. Most of them are well-qualified. Cull out those who are not well-qualified, and among the rest, the 20,000 or 25,000, whatever the number is, admit by lottery. That’s my proposal, as a way of conveying to students and also to their parents what is true in any case: that luck matters as much as effort in admission. That’s my proposal and, well, I don’t expect it to be embraced or accepted anytime soon, but I think it’s a way of tamping down or at least questioning the meritocratic hubris and the intense pressure that young people and their parents are under for years as they go through the high-pressure, meritocratic gauntlet.

Uhler: You talk about the different doors through which you get into college, the side door, the front door, the back door. This lottery system would, I guess, theoretically, sort of limit folks getting in through nefarious ways. Is that the idea too?

Sandel: Well, it very well might, because many of the mechanisms that give an advantage to kids from affluent backgrounds include legacy admissions, you get an advantage if your parents are alums; donor admissions, there are a lot of places, especially private colleges, strapped for funds, who give an edge in admissions to children of wealthy donors even if they’re not alums; and also athletic scholarships. On the whole, they do not give the advantage to kids from disadvantaged backgrounds. When you consider the sports for which students are recruited — water polo, fencing, squash — these athletic admissions also give an advantage to well-off kids. So I think that the lottery system would enable us to overcome a lot of that.