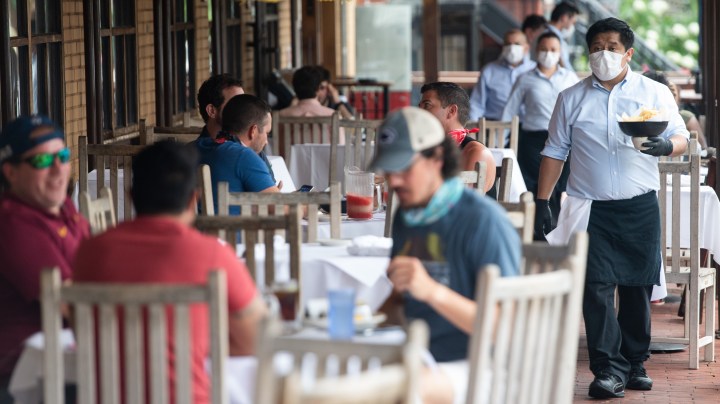 Cibolo Creek Brewing Company, a family-run operation in Boerne, Texas, tries to treat its employees like family too, according to General Manager Josh Mazour.

Part of that familial treatment? A no-tipping policy. Since the counter-service brewery and restaurant opened nearly five years ago, menu prices have reflected both the cost of the food and the service.

Cibolo Creek Brewing Company is one of a growing number of restaurants that are forgoing tips for automatic surcharges or higher menu prices, to pay higher hourly wages to their employees.

The business model has resulted in a reduced turnover for some places and has decreased the pay gap between front- and back-of-house workers. In traditional tipping establishments, servers who worked for tips had the chance to make a lot more money than back-of-house workers, including chefs, cooks and dishwashers.

As the U.S. economy (and our favorite eateries) reopen, many restaurants are facing a service worker shortage. Saying goodbye to the tipping model could be just the solution, said David Cooper of the Economic Policy Institute.

“I think [the pandemic] has rightly forced us into this sort of rethinking about job quality and what workers should expect. And that’s created the scenario we’re in now, where employers are struggling to fill these jobs because, generally, they’re just low-quality jobs,” he said.

Cooper added that the stressors of pandemic-era serving, including having to police mask-wearing or social distancing, as well as the risks of working an in-person job, added more to the plates of low-paid service workers.

Federally, the hourly minimum wage has stalled at $7.25 for many but at $2.13 for tipped workers.

If a tipped-wage worker doesn’t end up earning an average of $7.25 per hour (or whatever the local or state minimum wage is) in a paycheck, their employer is supposed to make up the difference. But that often doesn’t happen, according to Cooper.

The people most likely to work in the service industry are women and people of color, said William Spriggs, an economics professor at Howard University. And that’s not a coincidence — the history of tipping in the United States is one that reinforced racial hierarchies, Spriggs said.

That history was part of the decision to eliminate tipping at Good Neighbors Meeting House and Wild Goose Meeting House in Colorado Springs, said Managing Partner Russ Ware. The restaurants both have explainers on their websites for curious customers.

Originally, the two establishments, which operate cafe-style, with workers both cooking and serving, operated as tip-sharing establishments. But after a wage and tip dispute with employees, they began to re-evaluate the tipping model they relied on.

“Just learning about the history of tipping a lot of things like that, there’s a whole historical justice value reason to maybe try to go away with this model and find one that really fits with who we are in the community,” Ware said.

Both Good Neighbors and Wild Goose averaged about 15% in gratuity per transaction. So, they bumped menu prices by around 15% and were able to boost wages, making them more consistent. What that translated to was a starting hourly wage of $16, a dollar or two above the average the staff made with the old model, Ware said.

Heather Moake, 23, started working at Wild Goose when she was 16. Now a manager there, she said that although there was an initial adjustment period for staff and customers, the response to a no-tipping operation has largely been positive.

Plus, she said, it feels empowering to flip the power dynamic of tipping on its head.

“I think whether it’s conscious or unconscious, people have biases when they’re tipping or not tipping and it’s nice to be genuine without any kind of bargaining chip over your head, like, depending on how you treat me will affect how I tip you. So it’s really freeing that way,” she said.

A little over an hour north of Colorado Springs in Denver, Restaurant Olivia made the same switch. When the restaurant opened in January 2020, an automatic 3% surcharge was added to checks to support back-of-house workers, said co-owner Austin Carson.

When COVID-19 hit and the restaurant temporarily closed, Carson saw an opportunity to change that policy. As at Wild Goose and Good Neighbors, tips for all workers are now included in the price of menu items. There wasn’t a flat uptick in prices across the board; some menu items were nudged up a little, while others increased in price by as much as 33%.

Though there’s still a pay gap between front-of-house and back-of-house, it’s narrowing at Restaurant Olivia since the implementation of the no-tipping model. The higher hourly wages also provide consistency for employees, which can help in establishing proof of regular income when renting an apartment or buying a house.

Restaurant Olivia is in the process of enacting a 401(k) program with hopes of looking into health care options in the future, too. Carson said that those benefits, plus the stability of income, can help keep staff around and prove that the restaurant industry can be a career rather than just a job.

The non-tipping model does have its opponents, however. Servers or bartenders often prefer the high tip wages they can earn on a busy night. Some patrons feel tips incentivize good service. There’s also a powerful restaurant lobby largely responsible for current non-tipping wages.

But if the service industry wants to recruit and retain employees, Spriggs and Cooper believe it has to re-evaluate the gratuity model that allows customers to determine the total pay of their employees.

Ware sees non-tipping operations as a solution to what he says is a “fundamentally flawed” business model.

“Tipping is basically a smoke and mirrors game,” he said. “This steak that you’re paying $20 for and then tipping another $5 isn’t actually a $20 steak. It’s a $25 steak, it always has been. If you don’t pay that, if everybody stops tipping at every restaurant right now, the whole house of cards would fall apart.”

Both Ware and Mazour at Cibolo Creek Brewing have plans to open additional food ventures in the near future. And as for tips there? Don’t worry about the mental math; they’ll already be included in the sticker price.