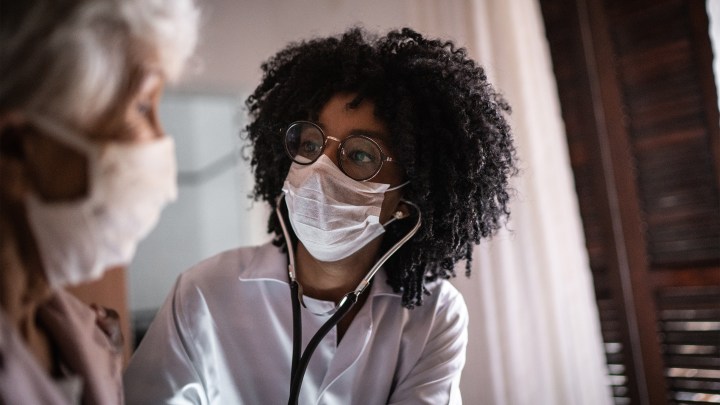 COPY
A new report from McKinsey says Black Americans are underrepresented in occupations like doctor that are traditional pathways to the middle class. Getty Images
Race and Economy

A new report from McKinsey says Black Americans are underrepresented in occupations like doctor that are traditional pathways to the middle class. Getty Images
Listen Now

Just 4% of occupations — including doctors, lawyers and teachers — account for more than 60% of the total racial wage gap experienced by Black Americans, according to new research from McKinsey. The $220 billion annual wage gap the study identifies encompasses both pay disparities within jobs and a disproportionate representation of Black workers across job types.

The report points to sweeping economic disparities Black Americans suffer across several spheres of life: as workers, business owners, investors and savers, consumers and as residents served by public programs, like public schools. Closing the racial disparity in just one of those five categories — wage disparities in employment — would propel 2 million Black Americans into the middle class, said Shelley Stewart III, head of the McKinsey Institute for Black Economic Mobility and co-author of the report.

“We’ve also got tens of millions of Americans, many of whom are low-income and many of whom are people of color, who also have outstanding potential to contribute to our economy,” Stewart said in an interview with “Marketplace Morning Report” host David Brancaccio. “And if we’re going to unlock that participation, we have to invest in educating those folks and ensuring that they have the skills to compete in the job markets of the future.”

David Brancaccio: You come at this from so many angles. What’s the number here — how many people do you think could be brought into the middle class?

Shelley Stewart III: Our work looked at the Black experience through the lens of the different roles that we play in society. Black Americans are workers. We’re business owners. We’re consumers. We’re residents, and we’re savers and investors. If you look at just the worker role alone, if you could close the wage disparity we identified there, you could get another 2 million Black Americans into the middle class.

Stewart: It really is. And again, that just is scratching the surface, given the disparity that materializes across the other roles that we play in society. But yes, income and wage disparity alone would be a significant step forward for Black Americans.

Brancaccio: Another showstopper related to the wage disparity that you’ve brought up here: You looked at, like, 500 occupations and found that a small subset of them, 20 of the 500, account for a huge amount of the wage disparity.

Stewart: Yeah, that’s right. Less than 5% of occupations account for 60% of the wage disparity. There’s a couple of dynamics there. The first is this idea of progression, and a big part of that opportunity is building a funnel to get folks from front line into manager and supervisor roles. And a few others I’d highlight are actually traditional pathways to the middle class where Black Americans are just underrepresented. I’m talking about teachers, Black doctors, Black lawyers. [There’s a] huge opportunity there for us to improve the representation. These numbers have only moved incrementally over the last 50 years in terms of representation for Black Americans.

Stewart: It’s an incredibly low number, which has all sorts of implications for Black Americans and Black communities. Only 2% of employer firms — firms with at least one employee in addition to the owner — are Black-owned, and that’s versus something like 13% of the population. And there’s a lot of things at play here, but first and foremost are significant capital challenges, both limited wealth to draw on, given the large wealth gap between Black Americans and other groups. Lower income and wages, when you’re a worker, translates to a smaller amount of savings that you can draw from when starting a business. And then there’s all sorts of challenges that Black business owners face trying to access more traditional sources of capital, like loans and equity, that have to be addressed if we’re going to make a big difference here.

Brancaccio: You also took a look at people who are served by public programs, and that could just be who gets access to good education. And the report raises an interesting issue about when we fund public schools through property taxes. That can perpetuate these disparities?

Stewart: That’s right, David, and we’re certainly not the first firm to make this point. But there is no doubt that we have made an explicit decision about how we support public education in this country that has a tendency, over time, to extend and even magnify disparity. If you look at high-concentrated Black schools and you compare that with schools that are higher-concentration white students, you find an $1,800-per-pupil-per-year funding gap. We can make a different set of decisions about how we’re going to support our youth generally in this country, and really invest in education in a way that does not magnify existing wealth or income disparity.

Brancaccio: And get on the stick about a lot of this because it’s a matter of social justice, but it’s also economic development for everyone, you calculate.

Stewart: That’s exactly right. We know that one of the greatest strengths of the U.S. economy is our talent. That talent comes in many forms. Some of it comes when we attract great folks from different parts of the world who want to come and live and work here, and I think we should continue to celebrate that. But we’ve also got tens of millions of Americans, many of whom are low-income and many of whom are people of color, who also have outstanding potential to contribute to our economy, to our labor force. And if we’re going to unlock that participation, we have to invest in educating those folks and ensuring that they have the skills to compete in the job markets of the future. And again, those folks are here — and they represent a huge pool of underutilized talent that we should be tapping.